Born into an extremely poor family in the small rural community of Riidma, Estonia in 1864. His father was a peasant working on the Alatskivi estate, one of whose sons died at an early age. The others, however, all showed remarkable talents, Elias becoming a schoolmaster and musician, and Jakob playing a major role in Estonian literary history.

But Juhan displayed the most talent, although he attended only three years of school in the village of Naelavere, and another few winter months at the Hugo Treffner private school in Tartu.

In 1885 Juhan Liiv met the daughter of the coachman of a nearby manor Liisa Marie Golding, and fell in love. His first attempts to write poems belonged to that period. His first published poem was “Maikuu öö” (“A Night of May”), a sonnet printed in the Tallinn newspaper Virulane. One of Liiv’s best-known love poems, “Mu viimne laul” (“My Last Song”), dedicated to Golding, dates from September 1896. However, they did not get married, she going to live and work in St. Petersburg, while Liiv suffered in 1893 his first attack of mental illness.

In 1887 Liiv composed the manuscript of his first collection of poems, Õied ja okkad (Blossoms and Thorns), but could arrange for its publication. For a while he attempted to make a living as a journalist, but could not keep any job for long. He worked at the newspaper Sakala in Viljandi (1887-1888) and from 1890 on at the weekly newspaper Olevik in Tartu where a series of his short stories were published. He left the editorial board in autumn 1892 and rented a flat in Tartu to dedicate himself completely to poetry and fiction. At the end of the same year, he completed his short novel Vari (The Shadow), an attack on Germanic racial and male hegemony in his homeland. At first ignored, it was published in 1894 in Tallinn, to become was is today considered his most important prose fiction. 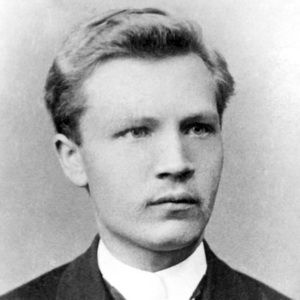 Liiv’s mental illness—a form of schizophrenia—was never cured, but the fact remains that the major part of Liiv’s best known poems were really created after that fatal year of 1893. His madness alternated with clarity and moments of recognizing the truth, during which he was able to create poetry charged with extraordinary power of imagination, aesthetic sensitivity and philosophic penetration.

Having spent the end of the century in obscurity, Liiv reappeared in public from the start of the new century, when the young generation of writers, led by Gustav Suits and Friedebert Tuglas, formed the nucleus of the literary-cultural movement Noor-Eesti (Young Estonia). In the years 1904 and 1905 when Liiv lived at the mental hospital of Tartu, he started to gain wider recognition as a poet.

As Liiv himself did not publish any collection of poems, the canon of his poetry was almost entirely established by the young writers Gustav Suits and Friedebert Tuglas. Suits chose poems for the first book selection, Luuletused (Poems, 1909/1910), while the steady dedication of Tuglas, after the poet’s death, made Liiv famous. Liiv’s poems were taken to school anthologies and textbooks. And over the years Liiv has become one of the most beloved and read of Estonian poets.

In early 1913 conductors, taking the ill writer for a tramp, rudely pushed him off the Tartu–Valga train, into a marsh. Added to Liiv’s life-long smoking habit, this event helped induce the tubercular pneumonia that resulted in his death on the 1st of December.

In 1924, the factory Tegur, of Tartu, set up at Liiv’s grave in Alatskivi a monument with a bas-relief and the poem “Kui tume veel kauaks ka sinu maa” (“Though Your Country Be Dark For a Long Time”).

Liiv’s nature lyrics and patriotic prophesies, as well as his prominent feature of “essential simplicity” (in the words of the emigree Estonian poet and critic, Ivar Ivask) have a lot to do with his world perception as an anti-anthropocentric thinker. The nucleus of Liiv’s thought could be qualified – in terms coined after the poet’s lifetime – as a kind of intuitive existentialism and holism, intensely intertwined. Liiv claimed for life a totality—simultaneously spiritual and corporeal—in which every element was indispensable. As  Jüri Talvet wrote, “Much more than any rationalistic or materialistic aspirations of the human species, love and death, according to Liiv, reveal our deepest and noblest self. He created a large body of lyrical poems transmitting the tragic sense of our existence, and at the same time, the beautiful and the purifying.”

Over the years, several collections of his short stories have also been published, as well as non-fiction works.

For a selection of poems, go here: https://www.poetryfoundation.org/poets/juhan-liiv

Posted by Douglas Messerli at 5:05 AM