"Transforming History" | essay by Douglas Messerli (on the Russian Anthology From "Black Mountain" to "Language Writing": Anthology of the Newest Poetry of the USA)

Yesterday I participated simultaneously in several literary historical events. With 18 other US poets I read with Russian translators to celebrate the is publication of a new Russian anthology of US poets, From "Black Mountain" to "Language Writing" : Anthology of the Newest Poetry of the USA, edited by Ian Probstein and Vladimir Feshchenko. That this book of some 782 pages could come into existence at any time, let alone this terrible time in history is something close to a miracle. It has taken the editors many years just to find a proper publisher and to obtain the rights, some of which they simply couldn’t afford, sadly, such as the work of Jackson Mac Low. 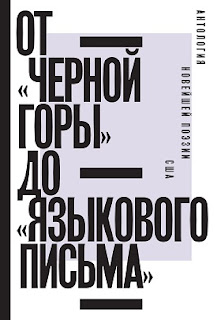 Ron Silliman suggested that, since Probstein was having technical difficulty in getting the session to record on other venues such as YouTube, perhaps Jackson was there as a ghost since, despite his constant use of tape recorders, various microphones, and other devices, Jackson’s readings began almost always with just such technical problems. I can affirm that!

The scholars and poets who edited and translated this immense work all seem to share American sentiments when it comes to the war in Ukraine, and expressed that many of them to now feel a sense of displacement and emigrant status, even for those who still remain in Russia feeling not at home in their own country.

That the book has actually come into print at this time, in world impossible to imagine when they began their efforts, is a further wonderment. A few of the US poets actually have received copies, but most of us are still waiting to see if the publisher can even get them out of the country.

Reading to celebrate that event was a truly significant pleasure. But then we—those of us among many others included in this huge anthology who had agreed to read—realized suddenly that something just as amazing had happened without our truly thinking about it. Together in one vast zoom room were 19 of the most significant figures of innovative US poetry reading work in one long 4-hour session that was not devoted to another figure (such as the important gatherings of poets for the birthday celebrations and deaths of figures such as Mac Low, David Antin, John Ashbery, etc). but simply reading pieces from their own work, some of which dated back several decades.

We had long known one another and admired each other’s work. Indeed, several of the poems read were familiar to a number of our ears. Indeed, I realized at one point during the long 4 hour session that I had published—in either original book or anthology form—16 of the 19 poets, the other 3 being either too young at the time I was actively publishing or having represented work I had not yet fully experienced or assimilated. Indeed many in the room had published others and/or celebrated their work over 4-5 decades. The eldest of us, Jerome Rothenberg, was one of the greatest US anthologists and had probably influenced in one way or another everyone in the room. Indeed the Russian editors recognized him as being an enormous influence in their own anthology-making.

Several of us in the room had been long ago and even more recently traveled to the former USSR and Russia, many of us on trips with Lyn Hejinian on tours with her and her ROVA Saxophone Quartet-playing husband, Larry Ochs on jazz tours which included meeting and hearing Russian poets reading. But the 19 of us had also often been long-time friends, some of us even university or college colleagues—although most of us, aging as we are, had not recently seen each other. I had not seen some of these individuals for two-three decades or even longer. 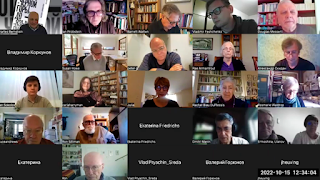 But here we were, along with several other poets, companions, and literary aficionados together again! Perhaps, I fear admitting, in some cases for the last time. Has such a vast reading of major US poets ever before taken place that has not been centered around a peace rally or political gathering? But then, perhaps without openly speaking about it, this was also a peace rally and a political statement.

At 9:33 Pacific Coast Time, the event began with Ian and Vladimir, after summarizing some technical issues, presenting a general introduction. Charles Bernstein noted that he was recording the event for the University of Pennsylvania’s PENNSOUND.

To begin Jerome Rothenberg (now almost 91, with his wife Diane hovering nearby) read two poems from his Khurbn & Other Poems, the second poem being a work I’d heard before and loved, “The Cruel Majority” Editor Ian Probstein read the Russian translations.

He was followed by Lyn Hejinian reading from her Oxota: A Short Russian Novel originally published in 1991 and reprinted recently in 2019. I had heard her read from this work years before in Los Angeles. Her translator Ivan Sokolov read the Russian.

Ron Padgett, long associated with the New York School, read two poems, the latter of which was “Conversation with Vladimir Mayakovsky,” which I’d never before heard and quite enjoyed. Probstein also read these poems in translation.

Ron Silliman read from his Chinese Notebook, the complete version of which was published in 2007. The Russian translator was Vladimir Mazin, but Ivan Sokolov read. I had not seen Ron’s face for several decades.

Rae Armantrout read from one poem I had long ago published, “Xenophobia,” and another more recent one I’d not heard before, but also loved, “Threat Landscape.” Her translator was Ekaterina Zakharkiv in Moscow. I’d spent several days with Rae when we read years ago in Buffalo and Albany, New York.

The renowned Rosmarie Waldrop, at 87 another long-lived figure, read “Second Language.” I have even stayed in Rosmarie and Keith Waldrop’s Providence, Rhode Island home but, I realized, I had heard her read only one before, at my own Sun & Moon offices at an Italian event that was also a remarkable cross-cultural affair, but not quite as formidable as this. What a treat to hear her voice reading it and Yermosina’s Russian version.

Peter Gizzi read his beautiful “The Light on Nanatuk Avenue” and “How to Read” from England, having to leave for a night event related to the occasion for his traveling there. Azernyi translated and read in Russian.

My dear friend Michael Palmer, who whom I’d traveled to Brazil, read from his Sun, a book which I still distribute. I’d read the poem many times, but heard it anew on this occasion. The translator was Alexander Skidan.

The incomparable Susan Howe read from her “Thorow,” an early spelling of “through,” published originally in her Singularities (1990), with Julia Trubikhina-Kunina reading her translation.

I selected four short poems translated by Manin, “Angry with China,” “From Hear to Air,” “The Hole,” and “Leap Year,” all from early books and unlike any of the longer works I’m currently writing. I was delighted that Probstein and Feshchenko thanked me for my anthologies From the Other Side of the Century and “Language” Poetries as models and guides for their own book.

My dear friend Bruce Andrews, with his long-time companion Sally Silvers in the audience, read “Strike Me Lightning” with translations of Feshcheko.

Alexander Ulanov read Rachel Blau DuPlessis’ Draft Five, “Gap.” The last time I saw Rachel was when she was a colleague of mine at Temple University in Philadelphia in 1974 or 75. We may have run into one another at a Modern Language Convention after that. But this was a lovely moment to watch her almost-always smiling face on Zoom.

Barrett Watten read from his Notzeit with Zakharkiv reading in Russian.

Bob Perelman, who I had last seen a few years back in New York with Charles Bernstein, read two poems I’d known from long ago and loved, “My One Voice” and “Let’s Say China,” translated by Feshchenko.

The other half of the only married couple included in this anthology, Carla Harryman married to Barrett Watten, read from her Queens and Pianos: Her Knight, a truly interesting work which I’d never before heard or read. Zakharkiv read in Russian.

Poet Nathaniel Mackey had been hiding in the audience under his e-mail code, but once found was put front and center to read from his “Sound and Severance,” with Manin translating, but unfortunately was cut off before he finished reading in Russian.

Kit Robinson, whose work I’ve long admired but have never heard read before, intoned “Intent to Consider” and “Unconfirmed Reports” translated by Probstein. It was good to hear his voice for the first time.

My dearest friend Charles Bernstein concluded the long morning and afternoon in California time by reading “Ruminative Ablution” and “The Wages of Pascal.” Although I’d heard him read just a few months earlier in Los Angeles, these were works I encountered for the very first time, translated once again by Probstein.

I wish I had the time, energy, and skill to comment more fully on every one of these thoughtful and fully meaningful works. I have written a great deal on many of these writers over the years, but this time I shall have to pass.

Finally, the very fact that almost two dozen US poets and as many Russians were gathered together in virtual reality at this unfortunate time in history is itself an historical event. Sadly, given what I fear will be an ever-increasing parting of the ways unless some other kind of miracle happens, I cannot imagine such a gathering again in my lifetime. These wonderful Russian friends had come to us to ask for works to help them understand our world, and we had joined to help them in their efforts, to better comprehend both our worlds and visions, and to celebrate the occasion. This is called community. Joyful sharing. Peace.

Posted by Douglas Messerli at 11:15 AM