Born in Bree on April 11, 1947 as Leon Helena Sylvain Nolens, the poet graduated from Holger Instituut voor Vertalers en Token in Antwerp. Writing under the name, Leonard Nolens he became one of the major poets of Flanders writing, and has published over a dozen books of poetry, journals and translations. His work has been translated into several languages, with major collections in French, German, Italian and Polish.

Nolens brilliantly addresses a number of classic themes, as if haunted by them: parents, the questioning child, youth portraits, farewell parties, city portraits, friends, loneliness, alcohol, God, money, the dream woman, and dream book. Nolens’ poems invariably distinguish themselves through their polyphonic ways of thinking and imaginary ways of acting. Each poem is a reasoning, each cycle a solid yet explosive behavioral type. Since 1989 Nolens has published four volumes of a highly singular journal, in which the relationship between poetry and identity is further fathomed. Nolens received the Constantijn Huygens Prize for his oeuvre in 1997. In 2004 appeared the fifth edition of his collected poems. 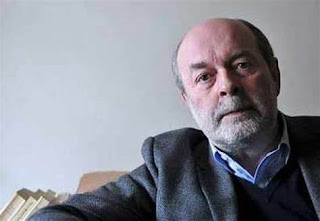 In 2007 Nolens finished the cycle-in-progress Bres (Breach), which he had been working on for more than ten years. The book was awarded with the VSB Poetry Prize, the most prestigious award in the low countries for poetry which carries a stipend of 25,000 euro for the recipient. Bres is generally acknowledged as a landmark in contemporary Dutch poetry.

He is also known for his highly singular journals, in which the relationship between poetry and identity is further fathomed. In 2009, Nolens decided to publish his complete journals as Dagboek van een dichter. 1979-2007 (Journal of a poet. 1979-2007).

Nolens has received numerous other literary awards, including the Jan Capert Prize in 1991 and the Belgian State Prize for Poetry in 1992.

—based on writing by Tom Van Vorde

I have a love who’s as old as my self.

She cannot die as long as I’m not dead.

She so likes being burdened by my name.

She publishes my flesh and blood till it’s all gone.

She hawks outdated news of me around the world

And blindly sorts the lines I never understood.

I have a love, she’s always in danger

And can only leave when I don’t know the way.

The road that we are on, we roll it slowly up

Into a stone. We’ll lay it one day on our grave.

Of men who keep their love hot and moist

In a far-off spot, and so cook their days.

Of women who have swallowed their lovers

And make their swelling bodies into sheer religion.

I know those two, they are alone, but for each other.

They have time, the same one, but on grounds that differ

In that water they lie abysmally reflected

Viewing the passing, passing the view.

And not a soul who knows what has got into them both.

They say that poets should keep their tongue in check.

They, they are the fashion journalists who slate my clothes

And tomorrow wear my designs. They are the kitchen inspectors

Who sup on my flesh and spit in my pans.

They are the weed killers and dead doctors of poetry.

But who has clothed the naked and fed the hungry ?

No, the tongue you have stained on your slides is also mine

And what you is actually pretty pathetic.

Your metrical jackets and rhyming britches, count me out.

Your salt-free sonnet snapshots, excuse me, no, merci.

I can’t help it, the sublimest prosody

Comes from the guts, ultimately every soul thinks intestinally

(Unlike my capital letter, here she comes :

She is the C clef of my horizontal staves.)

Perhaps this charms or startles. It wasn’t meant to.

Many of these lines are hammered together with malice and hate.

Even with good intentions, my road leads to hell.

If you suffer you go to hell, there’s no percentage in pain.

Words, seed and cents were made to spend freely.

Never put them in the savings book of the evident form.

The deepest form is in the fellow’s rhythm poetry

With balls, therefore, as Pavese said, and he gulped his death.

The Poet to Himself

Go on, just you try, unclothe me

To the bone, I’ll remain the final cut

Of your suit, the rested rectangle

Of your bed, your handiest form of hope.

And you, you’re nothing but a glimpse

Of me, oh you, my chain-smoking shadow

Between two trains, my moaning phantom

With suitcases, you, my hobbling ghost

Who will wash away through the slow revolving door

Of a derelict station.

Go on, just you try, forget me,

My friend, my frank absent slave.

I am your whip, you bleed from my hours.

I am your work and you are my servant.

We are sitting naked at table. Your eyes light up the room.

Luminescent, your butterfly hands stir the air as you speak

To me, or quiet in sleep on the black cloth remain.

I touch them every day. Their lifelines know my name.

Their transparent veins conceal the course of my fate, the beat

Of our blood that changes the white of your cheeks to desire’s mottled bloom.

The back door blows open. The first drops of rain rustle through

The trees, sprinkling the wind-shaken window in which you sit glowing,

A light which shows me myself, into whom I may fade and pass.

You pile up the plates, brush the crumbs off an fill up my glass.

From the kitchen I hear the clink of knives and blue porcelain echoing,

Far off. My legs are aching with not being able to go to you.

We did not lie athwart in mother.

We lay on father’s top shelf

We lay on nobody’s stomach.

We lay well placed in the gap in the market.

We lay in the distance.

We lay back and liked each other.

We were not a fleeting photo.

We were not a dissolving crowd.

We were not casual beings.

We lived in austere houses

We were our won exception.

And temperament was no curse.

Personality not yet a stigma.

The sexual nature of texts

And gods was still not a scandal.

And every first name was me.

We never touched up the Christian lap

On wings of high fliers to the top of the party—

We played with fire in their sleep.

Full of baby boomers, we perched like rare white ravens

On a cage full postmodern parrots.

We clung to each other.

A widespread street gang of daydreamers,

A hermetic clique of hermits.

We lived on our knees

And worshipped the sun of not knowing

And kissed the eternal light of scepsis.

Nowhere were we at the centre.

We were poor and speculated on the exchange

We acted with prior inside knowledge

We became heroes to our precursors.

We were jeered at by our successors.

We became, dead earnest, our own laughing stock.

We were the open would

Of a shut book.

We were the closed mouth

Of an open question.

We were a few.

We played no part in a riot

We did not take to the streets.

We did not take a stand.

We pitched a tent of books and canvases.

We, in libraries, swotted modernity.

We real-timed in sheet music the amazing effect

We carved our statues from study and stone.

They will read themselves aloud there.

They found only later their partners in crime.

We were not a poetic theme of Mao’s.

We thought, we’ll make our own poem.

Posted by Douglas Messerli at 2:38 AM No comments:

Born in Calgary, Albert, Canada on April 17, 1955, Erin Mouré is a noted Canadian poet and translator (among her languages are French, Galician, Portuguese, Spanish, and English).

Her mother was original from Galicia, Poland (now the Ukraine), and her father was born in Ottawa. She has two younger brothers.

In 1975 Mouré moved to Vancouver, British Columbia, where continued her education at the University of British Columbia in philosophy, but after only year, she left her studies to work for Via Rail Canada, continuing to write poetry.

Today she lives in Montreal. 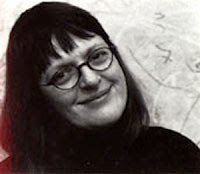 Melissa Jacques has written of the poet: "Erin Mouré's poetry is fragmented, meta-critical and explicitly deconstructive. Folding everyday events and ordinary people into complex and often irresolvable philosophical dilemmas, Mouré challenges the standards of accessibility and common sense. Not surprisingly, her work has met with a mixed response. Critics are often troubled by the difficult and therefore alienating nature of the writing; even amongst Mouré's advocates, the issues of accessibility and political efficacy are recurrent themes."

Mouré has won the A. M. Klein Prize for Poetry, the Governor General's Award for Poetry (1988) and been nominated for several awards.

The poet has also written essays and serves as contributing editor to The Capilano Review.

POURS, or What stills reveal about the human figure

We are beings inhabited by surprise.

When we are still, speech pours out of us.

There is a reason for our hair.

A reason reasons our hair.

Did a little mouse run around "here"?

Or were we truly innocent of tabulation.

When still we are not cadavers.

Our biographies are not synonymous &

Always chooses a note, & fails to sedate it.

A particular grief is always "being" jettisoned

until the soil, a varnish, lets up.

Because I said so.

Because "located" in inhabited space.

in a war, who lost an earlobe? who slept "right thru"?

Tomarric an invention of a yellow spice or trill

Her ear still says so, is still

in a war, who baked flageolets with lamb? who "furnished"?

There is an impetuous shadowing mirth

His beautiful length of fur seen in stills only

But mortal does establish this

We inhabit or are spending

Sloughs off the human figure or off the dog

We have not been able to say "dog" up till now

Today we are admitting certain consonants

ovoid figures in a tested environment

Today we are admitting certain continents

in a war, who carried forward the plush moniker? who "wised up"?

If an ovation is a lesser form of "triumph"

She came out at last with a feature that wept

Too "is" has been a way this danger does inhabit

we are "up for walks" upon the Mountain

which is to say a feature or designation

Proper to admit or ponder

Proper to concatentate or disinter

Where features project an original form of landscape

what we planted there in still

in a war, who came back with curtailment? who "pitched" an arm?

el: Firstly, there is a lot here for which to beg your pardon. The deer

came out of the hill trees to feed at the hot side of the building,

stalking drifts to get there. It means an awful slow motion over time

exposure. It was her house, there were still fallen apples. "Still"

admits to what duration? The palimpsest determines or deters me.

How will I know the answer, when I only saw the photos in which (&

the dog. A kind of pointing animal or reference out of the framework.

Aside from this, I only want to say: fervid, avid, fervorous, ardour.

These are the mechanisms I am trying to deal with. Yrs, er.

For a reading of O resplondor and an interview, click below:

Posted by Douglas Messerli at 3:45 AM No comments: