Charles Bernstein’s collection of poetic essays, Pitch of Poetry is precisely that: a “pitch” for innovative and challenging poetry, and a statement about the “tune” or “key,” the sound of poetry itself. Bernstein’s writing is necessarily a thing made out of pitch, the black, sticky substance of coal or wood tar:

Poetry’s the thing with feathers (tethers) tarred on, as

in Poe’s “system” of Tarr and Fethering (fathering).

The kind of poetry I want gums up the works.

A tangle of truths.

From the outset of his career Bernstein has fought for a poetry of leaps and fissures, one that inhabits the space between logic and irrationality; here he furthers and refines his argument, in part one of the book, through a series of short essays that reiterate his ideas of “sounding the word,” and what he and Bruce Andrews once promoted as “Language” poetry. He restates his concerns with “disjunction, fragment, recombination, collage, overlay, and constellations,” while redefining poetic genres such as “prose poetry,” “free writing,” “The New Sentence,” Williams’ “Sprung Lyric,” “eco-poetics,” “performance,” and other possible poetic inclinations, including areas of “translation, transcreation, idiolect, and nomadics.” 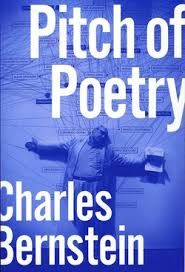 In the second part of the book—the “pitch” itself—Bernstein offers longer and shorter essays on his influences and the contemporary figures he admires in order to help define his aesthetics: Gertrude Stein, Louis Zukofsky, Charles Olson, Paul Celan, Barbara Guest, Jackson Mac Low, Robin Blaser, Robert Creeley, Larry Eigner, John Ashbery, Hannah Weiner, Haraldo de Campos, Jerome Rothenberg, and in the shorter category, Maggie O’Sullivan, Johanna Drucker and others. (In the interest of transparency, he has kind words about my own poetry and publishing). Not all of these essays are equally convincing, but together they lay out a poetic  landscape that clarifies what Bernstein as both critic and poet finds compelling. In so doing he establishes a broad range of his bases—the territory of what he embraces as a poet.

The next section, devoted to 11 interviews and conversations, seemed initially to be the least engaging. I’d already read so many other such pieces and participated in a few with Charles myself. Yet the swath of self-revelation that emerges in these interviews is, in fact, more poetic and revealing than the essays. Bernstein—a highly gifted speaker who is often given to linguistic arpeggios—is particularly charming with foreign correspondents such as the Nepalese poet Yubraj Aryal, the Canary Islands-born writer Manuel Brito, and French writer Penelope Galey-Sacks. With these writers he evidently feels freer to restate his interests and turn them over in his own mind, exploring the depths of his numerous poetic projects over the years. A passage from the Galey-Sacks interview must suffice as an example:

You said something interesting at the conference yesterday:

that the intimations of verse occur on the teleological horizon

of the possible. Yet you’re also presenting language poetry

as breaking with convention, and I imagine you mean

breaking with American convention specifically? How does

this idea of continuity tie in with the idea of rupture, the

idea of breaking? You said yourself that there was a con-

tinuity in your work as well as an evolution—an expansion

of yourself. You are yourself an expanding poet, and you are

expanding through language…how do these intimations of

verse occur on the teleological horizon of the possible? To

cite Eliot, how do you connect your beginnings with your

There are different overlapping strands that twist and loop

back, as in a Möbius strip or Klein bottle. The issue of con-

vention is an important one, and it relates to the idea of

process. The best formulation for me is one indebted to

Emerson by way of Cavell: “aversion of conformity in the

pursuit of new forms.” The concept of aversion—which is a

audacious than the idea of breakage and transgression. Still,

in poetry the difference between those terms is more about

emotion and desire than accurate philosophical description or

decision. And so there are reasons why some poets talk about

cents coups). And in France you have that, of course, partly

with the French Revolution itself versus the British

Revolution; when you’re cutting off heads, that’s a vivid

image for this spectrum. But what’s interesting about aversion

actually feel the process of moving away and moving toward

rather than a splitting or disconnection or decoupling. That’s

relationships that occur, moving in, around, and about

convention. Because my work is entirely dependent upon

I wish I could quote further, but that would be to repeat the wonders of this book itself.

The last section, “Bent Studies,” is the most remarkable, simply because the author jumps onto the tightrope, challenging his ideas and wit to the full. With a “whoosh & higgly hoot & a he-ho-hah,” Bernstein takes on a remarkable cast of “Countrymen, Cadets, Soldiers, Monkeys, a French Doctor, Porters, an Old Man, Apparitions, Witches, Professors, etc,” along with the ghosts of Poe, Dickinson, Williams, Blake, Crane, Whitman, Mallarmé, Emerson, Wittgenstein, and Fanny Brice to explore and celebrate his idea of the messiness of real poetry. In the process he brilliantly lampoons academic writing, particularly by taking justified pot-shots at D. W. Fenza, executive director of Associate Writing Programs (who argues that it is “morally repugnant” to question the merits of the literary prize system), The New York Times Book Review, the New York Review of Books, and other official “protectors of poetry” who apparently want their poetry squeaky-clean and sweet, or, as Bernstein implies, want to excise his kind of poetry from their lives.

In a poetics of “pitch” and “tar,” such narrow visions of the poem simply cannot exist, and Bernstein seems to delight in debunking them. I’ve seldom had as much fun in jumping into the muck and mess of the poetry wars. Pitch of Poetry made me laugh—and sometimes even cry—but never for a moment was I bored or disinterested. How many critical works can be described in that manner? If you love poetry, and take it seriously, then this book is a must.


Posted by Douglas Messerli at 6:47 AM No comments: