Beyond the Wall, the new collection of poems by the Brazilian poet Régis Bonvicino published by Green Integer in a bilingual edition, is a great addition to the 2000 collection “Sky-Eclipse,”which includes Bonvicino’s earlier work, published by the same press; and it’s arrival is timely. Though the collection was most likely conceived well before the 2016 election, and Donald Trump’s wall obsessed campaign, the title – taken from the poem “Writing on the Wall” – seems eerily appropriate. The recent work of Bonvicino speaks to our contemporary times and works to unmask the shallowness of our liberal dreams and beliefs. In its dystopian acceptance of the world, Régis does what intellectuals and journalists refrained from doing during the election and goes roaming in the world, looking for the obvious contradictions and limitations which, though we convinced ourselves had been overcome, never really went away. The calm of the Obama years and the certainty of Clinton’s victory in the election were as superficial as the fashion color of the season. Maybe from São Paulo, from south of the border, be it literal or symbolic, liberal ideas were nothing but a façade, bombs never stopped falling, and corruption was never more blatant. “Never sell your revolt,” writes Bonvicino in “Petroglyph,” or you’ll be doomed.  Too bad we did not hear that warning in time. In short, Bonvicino reminds us that all that is solid still melts into air and capitalism is still capitalism, built on fake beliefs, always-rising inequality, and environmental crimes. The world is more Abu Ghraib and Alepo than Berkeley and Gramercy Park. 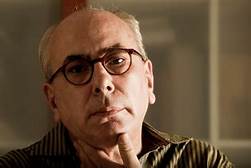 The poem “New Utopia,” one of the many prose poems in the volume, offers the poet’s diagnosis: “the new utopia dies standing. It sells both duty-free items and financial detox.” And he continues, foreseeing the limits of our multiculturalism and understanding: “the new utopia knows you can be an Arab and a Muslim, an Arab and not a Muslim, a Muslim and not an Arab. You can be Black without being White, White without being Black.” A superficial world made of commercial acceptance and multiculturalism only hides a reality of violence and discrimination that, at the first opportunity, reared its head again. It is this tension that sets off Bonvicino’s desire to describe what he sees, avoiding a coy sense of compassion or belonging, repeating the laser-cut language of advertising to display society’s failure. And whereas the poet does not offer answers, he offers a glimpse into what one would rather ignore. A favorite format in the collection is the building of lists that supposedly define a word or idea, but that inevitably gets lost in contradiction. The bilingual poem “Definitions of Brazil,” written in collaboration with the American poet Charles Bernstein, combines cliché descriptions of Brazil in a playful travel agency language –  “Brazil is a baroque barcarolle with a bossa nova beat”– while also presenting the violent reality such sing song language supposedly hides  – “Under the veneer of its vivacity, Brazil is violent, a vile viper playing a violet viola.” A similar logic is also present in “it’s not looking great,” a despairing ode poem to the supermodel Kate Moss. Fashion, one of Bonvicino’s favorite metaphors for contemporary culture, where everything and everyone seems disposable, is at the center of the poem. In line with high modernism, Bonvicino recovers the referential and opaque style of a T. S. Eliot, which begs for footnotes that in his case are never offered. A litany of fashion brands and models are listed, creating a poem that though writing about pop culture turns out to be of difficult access. Playing with the poetical tradition, Eliot’s high-culture references are substituted by kitsch metaphors: “Cocaine, Kate / it’s not looking great! / Chanel bid you adieu / Burberry’s iced you!” As it develops, the poem grows in violence. We, like Kate Moss, live in a world of fantasy that cannot last. And what started as compassionate advice turns into condemnation: “So you feel like “Dracula”! You cosmopolitan flame! Cocaine Kate, it’s not looking great!”
The selection of poems is presented as one great block with no divisions, though the poems follow the organization of their original publication in Portuguese, from Bonvicino’s most recent book Estado Crítico (Hedra, 2013), to Página Órfã (Martins Editora, 2007), and Remorso do Cosmos (de ter vindo ao sol) (Ateliê Editorial, 2003), tracing a decade of the poet’s work. Poems from each collection are easily recognizable by the changes in style and theme from one book to the next one, as well as by the recurrence of certain images and formal choices. That is, whereas the first part of the collection is thematically international, with poems such as “Paris, Barcelona,” “HongKong,” “Bone_Soupe@Neruda.com,” “A performing artist,” and “Glass,” offering a global test to the poet’s diagnoses; the second third of the book is centered in the poet’s city of São Paulo, and often returns to images of homelessness and the smell of carbon dioxide, in poems such as “The hamster’s way,” “In the morning,” “Residents,” and “Petroglyph.” The final part of the book features more enigmatic and lyric poems that reinvent flower and nature imagery, and explore an ornate lexicon, as in the poems “Fourth Poem,” Sixth Poem,” and the longer “Etc.” Still, all three parts of the book share Bonvicino’s linguistic jouissance and continuous search for a way – a form? – with which to face the world.
Translated by Charles Bernstein, Odile Cisneros, and Thérèse Bachand, the bilingual edition plays safe most of the time. The majority of the poems are translated by Cisneros and Bachand in solid translations that stay on the literal side of things and give a unity to Bonvicino’s work in English. Bernstein, a well-known poet and a creative translator, contributes only a few translations, but his bring forth a different side of the poet, his rhythmic ear and copywriting cut of language. Bernstein is a collaborator of Bonvicino and appears as co-author of two poems in the collection, which may explain his freedom. The two also co-edit edit the online international poetry magazine Sibila. The translators’ varied approaches to Bonvicino’s poetry, however, only attest to the challenge of this poetry, which, while it flirts with language and sound, is never devoid of meaning and social criticism.
--Marcelo Lotufo
Posted by greenintegerblog at 1:40 PM