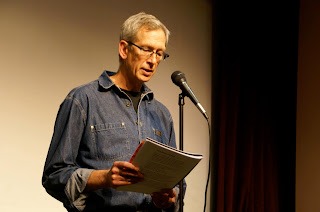 In San Francisco he published the one-shot poetry magazine Streets and Roads (1974). In the late 70s and early 80s he produced "In the American Tree: New Writing by Poets," a weekly radio program of live readings and interviews on KPFA radio in Berkeley with Lyn Hejinian; curated the Tassajara Bakery poetry reading series with Tom Mandel; and performed with San Francisco Poets Theater under the direction of his brother Nick Robinson. He taught for seven years with California Poets in the Schools and was director of the Tenderloin Writers Workshop in San Francisco. In the mid-90s he was literature director at NewLangtonArts.
In the 70s, Robinson worked as a cab driver, teacher’s aide, postal clerk, and legal reporter, as well as doing film delivery and repair for filmmaker D.A. Pennebaker and proofreading for publisher Maurice Girodias. Since the 80s, he has made his living as a marketing person for tech companies. A sometime musician, he plays the Cuban tres guitar in the charanga sextet Calle Ocho and lives with his wife Ahni in Berkeley, California.
Robinson has written extensively on the work of his contemporaries including Ted Greenwald, Lyn Hejinian, Anne Tardos, Bob Perelman, Carla Harryman, Rae Armantrout, Barrett Watten, Larry Eigner, Clark Coolidge, Michael Gizzi, John Yau, Anselm Hollo, Tom Raworth, and Bob Cobbing. He is a co-author of The Grand Piano: An Experiment in Collective Autobiography, San Francisco, 1975-1980 (Detroit: Mode A, 2006-2010).
Robinson’s play Collateral was produced at Poets Theater in 1982 and appears in The Kenning Anthology of Poets Theater (Chicago: Kenning Editions, 2010). His play Creative Floors was performed by members of the audience at Intersection in San Francisco in 1987. His translation from the Russian of Ilya Kutik’s Ode on Visiting the Belosaraisk Spit on the Sea of Azov was published by Alef Books in 1995. Performances with musicians have included the Glenn Spearman Trio (1996) and Drew Gardner’s Poetics Orchestra (2015).
Awards and honors include the National Endowment for the Arts creative writing fellowship (1979); the California Arts Council artist in community fellowship (1982); a U.S. State Department (USIA) sponsored tour of Stockholm, Helsinki and Leningrad (1990); and the Fund for Poetry prize (1995). Robinson’s poetry has been translated into Italian, French, Swedish, Finnish, and Russian.
In a statement on Elective Affinities. a cooperative anthology of contemporary U.S. poetry, Robinson wrote, “Poetry is the heart of language. It’s what’s left after everything else has been taken away. All the instrumental uses of language are completely necessary. We use language to invite people over, order food, build cities, etc. Take all of it away and you are left with poetry. Poetry is language on a holiday. Free to go where it will. But it is not jobless. The job of poetry is to continue, despite everything that is pitted against it.”
BOOKS OF POETRY

Posted by Douglas Messerli at 9:30 AM