Born in Lima Peru on May 14, 1875, José Santos Chocano (Gastañodi) was a major Peruvian poet and political activist. Chocano attended the National University of San Marcos at the age of 14, but after a short jail term for political activism, he moved to Madrid, a city in the early 20th century filled with notable artists and poets such as Juan Gris, Miguel de Unamuno, who wrote the prologue for his book Alma America, Marcelino Menéndez y Pelayo, and Rubén Darío, who helped establish the young poet from Peru into the international scene. 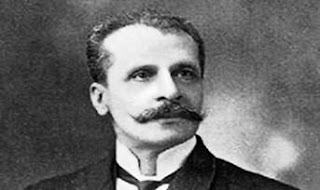 That 1906 poetry collection, perceived as a “new world” corrective to the cosmopolitan modernism of Ruben Dario, brought Chocano major attention, allowing the poet to travel and work for various different regimes throughout Latin and Central America with various political figures, including Pancho Villa in Mexico, Manuel Estrada Cabrera in Guatemala, and even Woodrow Wilson in the US, with whom he struck up a substantial correspondence.
After the 1920 coup, which deposed Estrada Cabrera, Chocano was briefly imprisoned, returning after to Peru, where he associated with President August B. Leguia. In 1922, he became The Poet Laureate of Peru, attracting a group of older and younger Peruvian authors.
Three years later, he became involved in a dispute with the Mexican intellectual José Vasconcelos, soon after furious when younger Peruvian students sided with the Mexican writer. Journalist Edwin Elmore, who had written an article about the dispute, met with Chocano after writing an article on the poet, and was shot and killed by Chocano.
After two years of imprisonment, Chocano moved to Santiago de Chile, where in lived in deep poverty, while preparing a new collection of poems, Primcias de Oro de Indias. Chocano was stabbed to death on a streetcar in 1934, some reporting the murderer was a madman stranger, others that the murder involved a love affair.
He also wrote prose works and political documents.
Today he is considered one the most important poets of Latin-American modernism, along with Ruben Dario, Manuel González Prada, José Marti, Manuel Gutiérrez Májero, José Asunción Silva and others.

Spirit of the Andes (Portland, Maine: The Moser Press, 1935)

Posted by Douglas Messerli at 2:55 PM No comments: 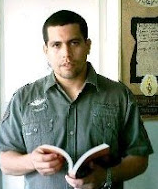 Many of his works have been translated, and publications have been printed in Venezuela, Columbia, Costa Rica, India, and Italy. Other individual poems have been translated into English, French, Italian, Hindi, and Portuguese. His poetry, “peppered with sex and violence, is at once both humorous and tragic."
Cruz has also translated George Bataille’s Le Petit into Spanish.
He currently works as the editor of the literary journal La Noria.