"On the Outside Looking In: The Poetry of Marsden Hartley" | essay by Douglas Messerli

On the Outside Looking In : The Poetry of Marsden Hartley

Marsden Hartley represents a rather contradictory figure in American art and literature. Both poet and painter—he wrote poetry during the mornings throughout most of his life and painted in the afternoons—he survived through the latter, but actively sought out literary attention and wrote about literature as a “business.” As an visual artist Hartley was at first an experimental abstractionist, particularly in his so-called German Paintings of 1913-1915, but later became a landscape artist and faux naïve realist in paintings such as Fisherman’s Last Supper—Nova Scotia (1940-41) and Christ Held by Half-Naked Men (1940). 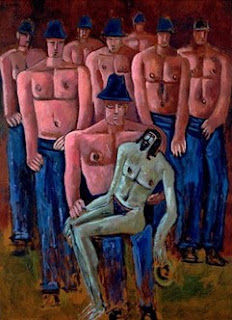 Although, in his youth he was known as one of the staunchest of the Greenwich Village bohemians, befriending a wide range of artists from Alfred Kreymborg, Djuna Barnes (who wrote a couple of articles about Hartley), Hart Crane, Marianne Moore, William Carlos Williams, and Gertrude Stein, he spent most of his years in his native Maine, far away from city life. At times both his art and poetry could be radically experimental, but both also display a great deal of romantic-inspired mysticism and Christian faith.

As a gay male he was wary of social norms, while at the same time being attracted to militarism and even toying with some aspects of fascism. As a poet, despite his call for what he described as abandonment of “Swinburnian encrustations,” at times his writing verges on the verbose narrative stylings of the fin de siècle writers:

of those who perished for the then so unrestricted huge idea—

And THERE—the master of the house was seen—ALONE—

making notes, with whispers on the side, of all the spoons his far

respected guests with gentleness had lifted in their moments

of ineffable simplicity, with jasmine hands to keep swift hounds

from tracking royal bijoux to those shadows where deep pansies

take another purple for their thought.

(“This lady rides a languid dromedary toward her dear-God,” 1923)

The same year, however, Hartley created one of his most adventurous works, “Diabolo,” wherein the great Mexican volcanos comically interact with other volcanos of the world:

from her own hospitable

ring around a rosy

on a craters lip –

with lava syrup in it –

In an African apricot jungle–

While the white epidermis of

In a work such as “From a Paris Window–High (first published in 1931),” using simple language to speak of the silent scene he is witnessing below, Hartley sounds a great deal like his friend Williams:

It is a scene

where all are kind

over the unsuspecting mind.

It is a country

where the lip reveals

to be so secular

it is a place

where no one ever sees

and yet strange bodies

and speak an alien

in which specific comprehension

and no grammatical despairs

Sunday is the day

who come to speak a word

that never shall be heard

it be, that silence

Yet throughout his long career as a poet, Hartley continued to use end, internal, and slant rhyme, to employ some regular rhythms, and to imbue his writing with aphoristic and even moralistic intent:

The eagle wants no friends,

employs his thoughts to other ends–

he has his circles to inscribe

twelve thousand feet from where

the fishes comb the sea,

he finds his solace in unscathed

where eagles think, there is no need

is a deep revealing sense

At other times, as in his City Scenes sequence of poems from 1930-35, he appears to be interested more in a kind of “Ash Can School” verism:

Before the greenish door she stood,

Her eyes and breasts were singularly small,

the rest of her was monumental.

There was a beastlike strength in what she said,

the temple in her soul was hallowed

with an ancient, patriarchal pride;

Hartley often argued that his poetry did not refer to and should generally not be published in conjunction with his art, but he clearly occasionally based poems on his artworks and created artworks that came from poetic efforts, as in “Fishermen’s Last Supper” of the 1940s: 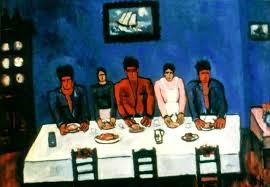 For wine, they drank the ocean –

for bread, they ate their own despairs,

counsel from the moon was theirs

for the foolish contention.

Murder is not a pretty thing

yet seas do raucous everything

to make it pretty –

for the foolish or the brave,

a way seas have.

Hartley’s poetry is varied stylistically and functions in so many different ways that I might almost be tempted to simply describe him as an occasional poet if one didn’t know how serious he was about his craft. As he writes in his essay, “The Business of Poetry,” “Poets must, it seems to me, learn how to use a great many words before they can know how to use a few skillfully.  Journalistic verbiage is not fluency.” Soon after, he adds: “Poets cannot, as aspiring poets, depend, it seems to me, ever upon the natural ‘flow’ that exists in themselves. Poets have to work to do for the precision of simplicity, and for the gift of volume in simplicity.”

Still, even his more experimental efforts, he seldom achieves those goals. And yet in several of his later poems, Hartley accomplishes something close to the “machine of words” for which Williams argued. In “The Very Languor” of his unpublished “Miscellaneous Late Poems,” a few simple images, not unlike Williams’ chicken and wheelbarrow, evoke a kind of terror of space and an oppressive lack of energy:

The very languor of the morning

for death because now sleeping.

The crowing of the bantam–

the red cheek of a single dahlia

the fluttering of the wash on the line

against the vastness of the

horizontal of the sea –

how terrifying at times a flat

or the crowing of a bantam

with a red cheek of a dahlia.

The very languor of the morning

The last line with its so easy repetition not only reiterates the horizontality of the poet’s vision but the temporary lack of imagination he feels in the face of the real world around him while implying the notion of a “so-so” universe.

In many of Hartley’s poems, indeed, there is a strong sense of isolation, a being apart and away from other human beings, whether it be simply an issue of distance and space as in the poem from a high Paris window, or a more distinct sense of separation from others through religion and social position as in the window washer’s poem (despite his gentle declarations in this work, Hartley has often been described as a strong anti-Semite). Hartley, it is apparent, lost his deepest love, the German soldier Carl von Freyburg, early in his life when von Freyburg died in World War I; and although it is clear Hartley had many dear friends to which he dedicated many of his poems, as a gay man living down east, he must have suffered, at times, great loneliness, as becomes apparent in his short poem “There Are No Rocks and Trees,” where he notes, “There are no rocks and trees that take / the place of people / the people that are rich and round and large / strong with a nation’s agitation / deep with a lovingness profound –.”

And yet, particularly in his later poems, people seem to have almost disappeared or, against rugged cliffs and waves, are represented as puny things. It often seems in Hartley’s meditative works that the poet is always somewhat outside the action, very much as he describes one of his painter heroes, Albert Pinkham Ryder:

I am speaking of Albert Ryder moonlightist

“I asked him to Christmas dinner,” the lady

said to me, who had a long time known him,

“he said he would come, we waited two hours

for him–the party eager to see him–he did

Next time she saw him – “O we were so

disappointed you did not come”–

“I was there,” said Ryder, “I looked through the

window – saw the lovely lights – it was very beautiful.”

In fact, one might almost describe Hartley’s poetry as somewhat voyeuristic, the work of a man who admits “I was an old man / at twenty-two” (“Surprise Package”), who goes about the countryside peering at the world about. This is nowhere more apparent than in his Whitman-esque vision of a father and his two young daughters taking a naked swim in a country “fresh water pond”:

The man’s back was turned south, and he was very like a

iron legs, all muscle and sinews, and the worked look of

his skin told him to be in his first forties

Man faced about breast facing south, and he magnificent,

with smooth dark hair, coming to a point on a low fore-

milkwhite teeth, and the eyes a deepest dark.

His powerful manhood spoke above all whispers over him,

hands and face bronzed with burning of the sun, the legs

He went over to the bushes to undress and redress,

Both Hartley’s poetry and his paintings, do, after all, actually represent a kind of outsider art. As skilled and trained as he was in both endeavors, his vision came perhaps from someone outside looking in, from a personal vision forever separated from the worlds he was observing, whether it be the excitement of Berlin in the early 20th century, the originality he observed in the designs of Native Americans, the simple beauty of the small villages of Provençal, the wondrous mountains of Mexico and, later, the New Mexico vistas, or even the familiarity of the place where he had originally grown up.

The contradictoriness of his achievements, in fact, may emanate from this propensity to observe the world around him and try to make it his own. Unlike so many artists, who, after some years of experiment, develop their style to repeat it again and again, Hartley seems to have been always on the lookout for new possibilities, for a way to find his way into the various societies in which he temporarily lived. Perhaps it was only in the Maine landscape that he could truly identify himself. But we are richer for the fact that he explored so many other ways of seeing and speaking.


Posted by greenintegerblog at 12:20 PM