Although many, if not most of the writers I publish think of me primarily as a publisher, I think of myself as a poet, fiction writer, critic, and memoirist who is also a publisher. I love publishing, to which the 400-some books I have published to date attest. But my heart is in the process of writing, not in the art of publishing; indeed if I had a great amount of money (or even any money to spend on publishing) I would pay someone else to do everything except making the initial selection. 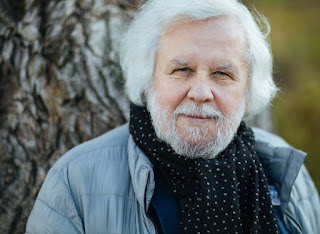 Posted by Douglas Messerli at 9:14 AM No comments:

the madness of the tongue
by Douglas Messerli

They’re mad, O gods,
keep their madness from my tongue!
Siphon a pure spring
through my sanctified lips,

From “On Nature: Fragment 4” by Empedocles of Akragas
It certainly does not seem like it was six long years ago that I read with others at the venerable Venice, California poetry center, Beyond Baroque, in celebration of Jerome Rothenberg’s and Jeffrey C. Robinson’s anthology Poems for the Millennium, Volume Three: The University of California Book of Romantic & PostRomantic Poetry. Yet reading from Jerry’s most recent continuation of his presentation of international outsider poets, Barbaric Vast & Wild: A Gathering of Outside and Subterranean Poetry from Origins to Present, I realized that in the interim, during which Jerry and his wife Diane have traveled across the continents, that I only seen him perhaps two to three times. 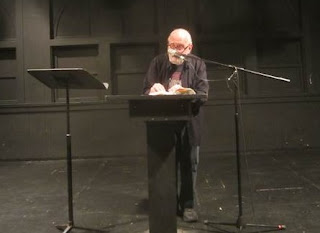 For all that, except for perhaps a slight diminution in height, Rothenberg seems unchanged, as always a kind of chuckling gnome with lit-up eyes, as if he might secretly be taking pleasure in something he ought not. Reading everything from Mother Goose lyrics and a selection from Jubilate Agno by Christopher Smart to a selection from his own “A Further Witness, for Anselm Hollo,” Rothenberg reiterated his incredible ability to bring poetry off the page into the performative space of a room, however large or small. Were the Beyond Baroque audience just a little larger, particularly given the energy of Jerry and, even if am slightly patting myself on the back, the rest of the evening’s performers. 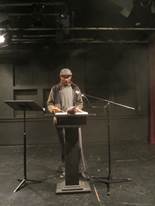 Will Alexander, as always preferring longer, more narrative works, read from Empedocles of Akragas, “On Nature: Fragments 1-10,” Egyptian, Pyramid Texts (“The Dead King Hunts & Eats the Gods”) and Mayan works of the 17th century.
Somehow he made these ancient works his own, displaying how his own surrealist-inspired cultural responses belong to the bardic tradition upon which Jerry and his co-editor have attempted to focus in this new anthology. 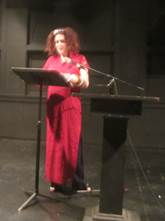 Christine Wertheim briefly described the work Shea Zellweger, consisting mostly of models and charts, before presenting a quite remarkable performative reading of one of the curing poems of the shaman Mexican María Sabina. Her reading seemed to me to be a quite faithful to the kind of trance-like quality of the selection from “The Mushroom Velada.” Rothenberg writes in the commentary notes about this poem:
A major Wise One (=shaman) among the Mazatecs of Oaxaca, Mexico, María Sabina received her
poems/songs through use of the psilocybe mushroom at all-night curing sessions (veladas): a practice going back to pre-Conquest Mexico and witnessed by the Spanish chronicler who wrote: “They pay a sorcerer who eats them [the mushrooms] and tells what they have taught him. He does so by means of a  rhythmic chant in full voice.” The sacred mushrooms are considered the source of Language itself—are, in Henry Munn’s good phrase, “the mushrooms of language.”
The selection presented here departs from the more extended, even “grandiloquent” language of some of the Chants, relying in part on techniques of fragmentation and the use of non-sematic sound (meaningless syllables, humming, clapping, whistling, etc.) The session itself goes on for a whole night, with many of the images, “self”-namings, etc. established early and repeated throughout in full or fragmented form.

Rothenberg was slightly aback by my selection of three poets, Ko Un, Larry Eigner, and Robert Musil—the first two of whom I had published—because of their more modernist and less bardic tendencies. But, as I pointed out to the audience, since I myself did not belong to the bardic tradition and had come to poetry quite late, diving only into new end of the pool, so to speak, I had simply been unable to imagine how to read some of the other, often longer, works. I had certainly been attracted to reading composer Harry Partch’s Barstow: Eight Hitchhiker Inscriptions from a Highway Railing at Barstow, California, but that entailed both reading and singing, and I had not had the proper time to devote to learning the music and performing it without instrumentation. 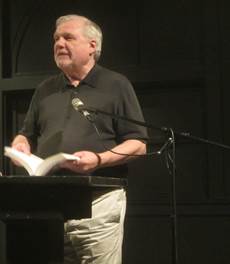 I read two Ko Un poems, “Beggars: Husband and Wife” and “The Widows of Chaetjŏongji,” from his Ten Thousand Lives, published in now 30 volumes, which purport to dedicate poems to everyone the poet has ever met in his life.
The selections from “Air the Trees” by Larry Eigner allowed me to dramatically convey their spatial relationships and the poet’s overall sense of fragmentation as poetic expression.
I found the second narrative-like “microscript” by Robert Walser, far more difficult to read, precisely because of its zany, disjointed tale which, I am sure, in the original German (written in the original in a tiny miniaturized Kurrent script, the German form of handwriting preferred until the 20th century) played with various accents mocking the social standing and self-approbations of the Good Mr. and Mrs. Brown in his opposition and harmonization to Mr. and Mrs. Black.
Beforehand, Jerry, Diane, Christine, Will, Pablo, and I, along with the Rothenberg’s friend, noted sinologist John Solt, enjoyed Thai food (my pumpkin curry was excellent) at a nearby little restaurant, Wirin. I only hope that it doesn’t take another six years before I can again so enjoy the Rothenberg’s company.