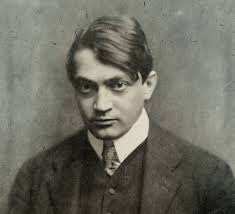 Endre Ady was born on November 22, 1877 in Érmindszent, part of the Austria-Hungary empire, and, now, the village of Szatmár Satu Mare County in Romania. His family was an impoverished Calvinist family of formerly noble position.
Ady attended the Calvinist College in Zalău between 1892-1896, publishing his first poem, in the city newspaper, during his last year of college. He continued his studies, majoring in law, at the Reformed College in Debrecen, becoming a journalist upon the completion of his education.
His first book-length publication was Versek (Poems), published in 1899. Bored by living in Debrecen, represented later as a symbol of provincial backwardness, Ady moved to Nagyváard (today Oradea, Romania). There is continued as a journalist, but also found a community of like-minded thinkers, publishing another collection of poetry in 1903. In August of that year he met Adél Brüll, a wealthy married woman living in Paris but, when she met Ady, was visiting her home town. She quickly became his muse, whom he called Léda, and he followed her back to Paris, revisiting that city 7 times between 1904 and 1911.
There he discovered the work of Baudelaire and Verlaine, poets who highly influenced his own writing. Returning from his first visit to Paris, where he stayed for over a year, Ady moved to Buadpest, where he began writing for the newspaper Budapest Napló (Budapest Journal), where he published 500 articles and numerous poems.
Early in the century Ady became aligned with the radical group Huszadik Száad (Twentieth Century), and published his third book of poetry, Új versek (New Poems), which became a landmark work, often describes as marking the birth of modern Hungarian poetry. The following collection, Vér és arany (Blood and Gold) but brought him critical acclaim and financial success.
In 1906 Ady returned to Paris, leaving his position at the Budapest Napl, but returned again to Hungary. Using the former EMKE café as a base, Ady founded a literary group he titled “A Holnap” (Tomorrow). The circle published not only Ady’s work but other major Hungarian poets, including Mihály Babits, Gyula Juhász, and Béla Balázs. Many attacked the new anthology for containing erotic poems and for work that represented what some Hungarians felts was unpatriotic work.
Although Ady championed these writers, he disliked his name being automatically linked with other newcomers. Satirizing these “upstarts” who jumped upon his bandwagon, Ady wrote a short tale, “The duk-duk affair.” 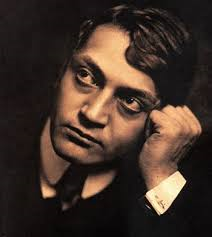 Throughout these years Ady edited the important Hungarian journal, Nyugat (West), pushing for literary and political change, but also wary of some of what he saw as Western faults.
Having contacted syphilis, he spent much of 1909 in sanitariums. Political chaos was also on the horizon, and he saw the possibility of a revolution. His continuing affair with Léda now became a burdensome commitment, and in 1912 he broke up with her.
In 1914 he met a 20-year-old woman, Berta Boncza, with he had been corresponding since 1911. The couple married in 1915, and he wrote many poems to her in which he called her Czinszka.
With the assassination of Archduke Franz Ferdinand in 1914, Ady saw that a world war was fast approaching. Although his friends seemed enthusiastic about the impending battles, he worried deeply for his country’s future, expressing many of fears in his last poem, “Üdvözlet a győzőnek” (“Greetings to the victorious”)
Syphilis had so weakened his aorta that he was now near death. The Vörösmarty Academic, an organization of modern writers, elected him their president, but he was unable to deliver his opening speech. He died in Budapest on January 27, 1919 at the age of 41.

REMEMBRANCE OF A SUMMER NIGHT


An angry angel beat the drum on high

--Translated from the Hungarian by Elizabeth Csicsery-Rónay