Born in Cambridge, England on November 16, 1918, Nicholas Moore (who wrote also under the pen names, Guy Kelly and Romeo Anschilo) was the child of philosopher G. E. Moore.
Nicholas was educated at Dragon School in Oxford and, later, the Leighton Park School in Reading. He attended the University of St. Andrews in Scotland and joined the student body of Trinity College in Cambridge. 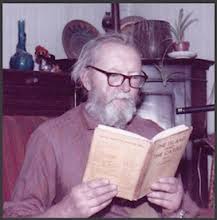 As an undergraduate, with John Goodland, Moore co-founded and edited the literary review, Seven from 1938-1940. The journal was later edited by Gordon Crukshank, Sydney D. Trmayne, Randall Swingler, and Philip O’Connor.
While at Cambridge, Moore involved himself with the London literary scene, serving as the assistant for the famed Tamil poet, Meary James Thurairajah Tambimutti, who edited Editions Poetry London and the Lyrebird Press. Beginning in the early 1940s, the author begin to publish collections of poetry, which linked him to the group described as The New Apocalyptics.
In 1944, Moore published a collection of poems, The Glass Tower, with illustrations by Lucian Freud. The following year, he edited The PL Book of Modern American Short Stories, and won that year’s Contemporary Poetry’s Patron Prize (W. H. Auden serving as judge) for a another poem, “Girl with a Wine Glass.” Moore’s 1947 work, “Girls and Birds,” won the Harriet Monroe Memorial Prize.
But, although his poetry gained him a reputation in the US, he began, in the late 1940s to find it difficult to get published. Throughout the 1950s he worked as a horticulturist, writing The Tall Bearded Iris (1956). Sometime later, he entered a competition in the Sunday Times for a translation award, entering 31 separate translations of a single Baudelaire poem, each featuring a different aspect of the original, rhyme, genre, pattern, symbols, etc. This work was later published in 1973 as Spleen.
In 1990 Carcanet Press published in collection, Longings of the Acrobats. At the time of his death, he also left behind a series of “pomenvylopes,” idiosyncratic documents containing poems typed onto envelopes and posted to friends.
His Selected Poems was published by Shoestring Press in 2014.

For a small selection of poems by Moore, go here:
http://www.poetryfoundation.org/bio/nicholas-moore