Elizabeth Smart (Canada)
1913-1986
Elizabeth Smart was born into a wealthy Ottawa, Canada family on December 27, 1913. Her father, Russel, was a noted lawyer, and her mother hosted large parties for major Canadian figures, including their next-door neighbor of the summer house on Kingsmere Lake, later Prince Minister William Lyon Mackenzie King. 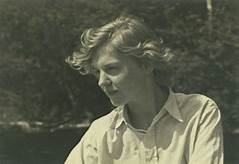 Although Elizabeth began her education at Ottawa Normal School, she was soon transferred to a private preparatory school for women, Elmwood, and later attending Hatfield Hall in Cobourg, Ontario. As a young girl she was misdiagnosed as having “a leaky heart valve,” and was confined to bed for an entire year. By that time, however, she was already writing poetry and keeping journals, a habit she would continue throughout her life. As a young debutante, she made friends with several notable Canadian figures such as Graham Spry, Charles Ritchie, and Lester B. Pearson, as well as King.
At 18, she moved to England to study music at the University of London. In the early World-War II years, she became secretary to Mrs. Alfred Watt, head of the Associated Country Women of the World, and international organization devoted to the causes of rural women. Traveling with Watt throughout the world to various conferences, Smart encountered the poetry of British writer George Barker and immediately was romantically taken by both the work and the poet himself.
After working with Watt, Smart returned to Ottawa where she worked for 6 months writing for the society pages of The Ottawa Journal, attending parties where she continued to express interest in Barker, telling friends that she not only wanted to meet him but that she intended to marry him. Soon after, she began a correspondence with the poet himself.
Interested in developing her own writing career, she quit her job at the Journal and traveled to New York, Mexico, and California, where she joined the colony at Big Sur. There she met Lawrence Durrell, through him making contact with Barker, and determined to fly the poet and his wife to the United States from Japan, where he was then teaching. Upon meeting, Barker and Smart began an affair that lasted for numerous years, and produced 4 children.
Becoming pregnant, he 1941 she returned to Canada, settling for a short period in Pender Harbour, British Columbia. Barker attempted to visit her in Canada, but Smart’s family put pressure on governmental officials, and prevented him from entering the country on account of moral turpitude.
Soon after this incident, Smart returned to the US, where she worked from the British embassy in Washington, D.C., sailing to Britain again in 1943 to join Barker. In England she gave birth to their second child, Christopher Barker, obtaining employment at the British Ministry of Defence in order to support her children.
During this period she wrote and published her magnum opus, a long prose poem-fiction titled By Grand Central Station I Sat Down and Wept, based on her tumultuous romance with Barker. The book, published by Tambimuttu’s Poetry London press in a printing of 2000 copies, at first received little attention, but over the years continued to draw readers, and was reissued in 1966. Her mother attempted to have the book banned in Canada, and ultimately bought up every copy she could find and burned them.
Barker, meanwhile, continued to visit London, and in 1945 another of his offspring, Sebastian was born. Two years later Smart had their final offspring, Rose Emma, born in 1947. Although the Catholic Barker offered to leave his wife for Smart, he never divorced, and had children from affairs with other women as well.
Yet the couple continued their relationship, living a highly bohemian life celebrated with parties with writers and painters such as David Gascoyne, Paddy Kavanagh, Roberts MacBryde, Colquhoun, Paddy Swift, and others, who gathered to discuss editorial decisions for their magazine X.
Barker, a heavy drinker, encouraged Smart to do the same, and the couple was often involved in serious fights, at one point Smart biting off part of Barker’s upper lip. Yet the relationship continued with Smart remaining devoted to the poet.
To support her four children, Smart began an job as an advertising copywriter and would last for 13 years. In 1963 she joined the staff of Queen magazine, eventually becoming an editor. While her relationship with Barker waned, she took up sexual relationships with other men and women, continuing to live a bohemian lifestyle in Soho.
As her fame increased, Smart retired from commercial writing and moved to north Suffolk to a cottage named “The Dell.” It was there she began to write voluminously in an attempt to make up time for the years she had devoted to raising her children.
In 1977 a book of poems appeared, A Bonus, and in 1981 another collection was published Ten Poems. Eleven Poems appeared in 1982, the year in which she also published her The Assumption of the Rogues and Rascals. Several autobiographical works followed, several of them, Autobiographies, Necessary Secrets, and On the Side of the Angels appearing posthumously. In 1989, her book on gardening, Elizabeth’s Garden was published. She had already gone through several editions of her book (co-written with Agnes Ryan) of her cookbook, Cooking the French Way. Smart’s Collected Poems was edited by David Gascoyne and published in 1992.
An hour-long documentary, starring Jackie Burroughs as the poet, was made by Maya Gallus in 1991.