Born on December 5, 1871 in Sendai, Japan, Doi Bansui, born Tsuchii Rinkichi, studied literature at the Imperial University of Tokyo with Lafcadio Hearn. He became one of the editors of the university magazine Teikoku Bungaku, which also published several of his own poems. 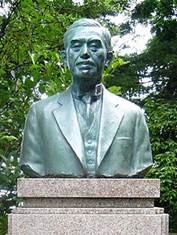 After graduating, Doi Bansui became professor of French literature at Tōhoku University in Sendai, where he also established himself as the major translator into Japanese of Greek and Latin classics, including Homer’s Iliad and Odyssey.
Among his own poetry collections were Tenchi ujō and banshō Bansui Shiskū. His most popular poem, “Kōjō notsuki” (“The Moon Above the Castle in Ruins”) which was set to music by Japanese composer Taki Rentarō.
He died in 1952.