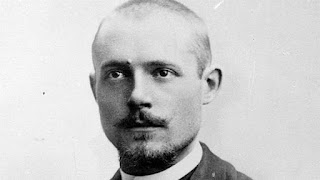 Charles Péguy was born to a chair-mending mother and a cabinet maker father on January 7, 1873, in Orléans. A year after Péguy was born, his father died of combat wounds.
The young writer studied at Lycée Lakanal in Sceaux, winning a scholarship to study at the École Normale Supérieure, where he attended the lectures of Henri Bergson and Romain Rolland, but left the institution in 1897 with graduating. Influenced by the school’s librarian, Lucien Herr, Péguy became an ardent Drefusard.
At the age of 24, in 1897, Péguy married Charlotte-Françoise Baudoin, with whom he had a daughter and three sons, one of them born after Péguy’s early death in 1914. Late in his life, Péguy felll love with Blanche Raphael, a young Jewish friend, but determined not to leave his wife.
From his very earliest years, the writer was influenced by socialism, joining the Socialist Party in 1895. For the last 14 years of his life, he served as a central contributor to and editor of the socialist party magazine Les Chaiers de la Quinzaine. After the journal was taken over by Jean Jaurès, however, Péguy left the publication, seeing the new owner as a traitor to both socialism and nationalism, which the author also increasingly embraced. In Chaiers, Péguy published his own writings and those of many other significant French poets, including Rolland. In his later years, Péguy turned to Catholicism.
Péguy published numerous important essays (among them, De la Raison [1901], Notre Patrie [1905], Situations [1907-8], Victor-Marie, Comte Hugo [1910], L’Argent [1913] and Note sur M. Bergson et la Philosphie Bergsonienne [1914]) as well as plays. But it was his free verse poem, Le Porche du Mysstère de la Deusième Vertu ("Portico of the Mystery of the Second Virtue") of 1912 that brought him fame. The poem has been published in over 60 editions in France, as was a favorite of Charles De Gaulle.
With the outbreak of World War I, Péguy became a lieutenant in 276th French Infantry Regiment, dying in battle from a shot in the forehead near Villeroy, Seine-et-Marne during the Battle of the Marne.
Although beloved by many in the French Resistance and de Gaulle himself, Péguy’s politics remain controversial. Benito Mussolini suggested that Péguy, presumably for his strong Nationalist position, was a “source” for Fascism. And some praised the poet as “a French National Socialist” akin to those of World War II’s Vichy government. His own sons, Pierre and Marcel, wrote that their father served as an inspiration for Vichy’s National Revolution, and described him as, “above all, a racist.”

For a link to Péguy’s poem “Freedom,” go here:
http://allpoetry.com/poem/8533051-Freedom-by-Charles-Peguy

Posted by Douglas Messerli at 8:22 AM