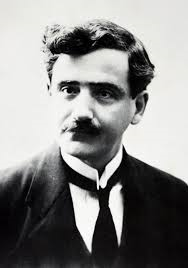 Already in his first book of poetry, Simbólicas (1911), Eguren broke with the Modernismo tradition, while maintaining links with the Romantic and early French Symbolist poets. His fantastic creations represented an attempt to escape realist conventions and enter an imagined world peopled with pre-surrealist-like dreams and nightmares in which the characters inhabited a visually rich tapestry.
His second poetry collection, La canción de las figuras (1916, The Ballad of the Figures) included highly personal and hermetic poems, but also continued in the symbolist tradition.
Although Eguren promoted the young Vallejo early in his career, with the publication of that poet’s Trilce, the symbolist vanguardist work of Eguren suddenly seemed dated, and his poetry, although still admired for its technical qualities, seemed out of the touch with social concerns of the day. In 1929, the communist editor José Carlos Maritátegui published a collection of Eguren’s poems, Poesías.
Eguren also wrote prose criticism, collected in Motivos estéticos (Aesthetic motifs), published in 1959), painted water colors, and took photographs.

The snow-covered dead
under a sad sky
pass along the avenue of pain
that never ends.

They go with the wandering forms
along the silent auras
and from dead they give the cold
to the willows and the irises.

Slowly they shine white
on the desolate road;
and they long for the daytime parties
and the loves of their lives.

When walking, the dead
search for hope;
they look only at the scythe,
their sad shapes absorbed in thought.

In the desolate night of the mists,
and in the prison, in the terror,
the distant walkers pass along
on the unending road

—Translated from the Spanish by Iver Lofving

The Girls in the Light

—Translated from the Spanish by Iver Lofving
____