Born in St. Petersburg in 1969, Dmitry Golynko was educated in Russian languages and Literature at Herzen University.
Golynko is an editor at Moscow Art Magazine and contributes regularly to several journals, including NLO, Novaya Ruskaya Kniga, and Séance. 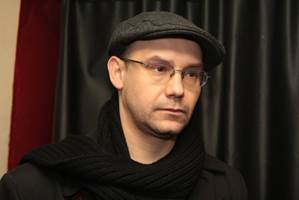 The poet’s first book, Homo Scribens was published in 1994, with Direktoria [The Directory] following in 2001 and Betonnye golubki [Concrete Doves] appearing in 2003. The American publisher, Ugly Duckling Press published his English language collection, with translations by Eugene Ostashevsky, Rebecca Bella and Simona Schneider, As It Turned Out in 2008. His most recent book is What It Was and the Other Arguments, 2013).
His poetry was nominated for the Andrey Bely Prize.
Golynko is also the creator of Literaturnay Promoza, a literary site. He works as a researcher at the Russian Institute of Art History and as a faculty member at St. Petersburg University, teaching Cinema and TV,
BOOK OF POETRY
Homos scribens (St. Petersburg: Borey-Art, 1994); Direktoria (Moscow; Tyer’: Argo Risk/Kolonna, 2001); Betonnye golubki (Moscow: Novoe literatunoe obozrenie, 2003); Что это было и другие обоснования (What It Was and Other Arguments) (2013).

For a large selection of poems by Golyno on tape, go to PennSound, here:
http://writing.upenn.edu/pennsound/x/Golynko.php
For a poem "The Keys to Yonder," translated by Kevin M. F. Platt, go here:
https://jacket2.org/poems/keys-yonder
Posted by Douglas Messerli at 3:36 AM