Born in Wheta, Ghana (formerly the Gold Coast) on March 13, 1935, Kofi Awoonor was educated at Achimota School before attending the University of Ghana. He began writing under the name George Awoonor-Williams, but later changed it to Kofi Awoonor.
His first collection of poetry, Rediscovery, was published in 1964 while still a student at the University. Like most of his poetry, it was based on the African tradition, particularly the influenced by the native Ewe people. 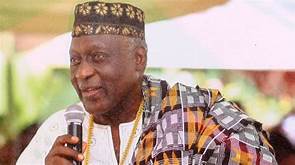 His second book of poetry, Night of My Blood (1971), was published while he was working on his M.A. at University College in London. During that period he also wrote several radio plays for the BBC.
He received his Ph.D from SUNY, Stony Brook in the USA in 1972, and served as a Professor at that university from 1968-1975. During this period Awoonor published is novel, This Earth, My Brother (1971) and wrote a third book poetry, Ride Me, Memory (1973).
Back in Ghana, he became head of the English Department at the University of Cape Coast, but was soon arrested for helping a soldier accused of attempting to overthrown the military government. Awoonor was imprisoned without trial, but later released. In response to his imprisonment, the poet wrote The House by the Sea which concerned his incarceration.
For several years during this period, Awoonor focused mostly on nonfiction works, including The Breast of the Earth: A Survey of the History, Culture, and Literature of Africa South of the Sahara (1975) and, later, Comes the Voyager at Last: A Tale of Return to Africa (1992), written after he had served as Ghana’s ambassador to Brazil (1984-1988) and ambassador to Cuba (1988-1990). From 1990 to 1994, he worked as Ghana’s Permanent Representative to the United Nations, where he served on the committee against apartheid. He also edited an anthology of Ewe poetry, Guardians of the Sacred Word.
Two further books of poetry, Until the Morning After: Selected Poems 1963-85 and The Latin American and Caribbean Notebook  appeared in 1987 and 1992.
On September 21, 2013, Awoonor was shot and killed in the Westage shopping mall in Nairobi, Kenya by Somalian terrorists. One of his sons was also shot in the attack, but survived.
Awoonor, who had been participating in the Storymoja Hay Festival, a celebration of writing and storytelling, was 78 at the time of his murder.