review "Somewhere Between Gesticulation and Thought" (on Hatif Janabi's Questions and Their Retinue: Selected Poems) by Douglas Messerli

SOMEWHERE BETWEEN GESTICULATION AND THOUGHT
by Douglas Messerli

Hatif Janabi Questions and Their Retinue: Selected Poems, translated from the Arabic by Khaled Mattawa (Fayetteville: The University of Arkansas Press, 1996)


Born in Ghammas, Iraq, in 1952, Hatif Janabi spent his earliest years in the relative comfort of a merchant landowner’s house; but in 1963 one of his father’s employees was charged with murder, which endangered his entire family, who were eventually forced to flee. They settled first in Baghdad and then in the Shiite holy city of Najaf. There Janabi observed the local parades to commemorate Hussain’s matyrdom, which involved “highly exhibitionist rituals,” including self-flagellation, all of which made a big impression upon the child.


As a teenager he began to write poetry. In 1968, Janabi entered Baghdad University to study Arabic literature; upon graduation he was conscripted into the military and served in Southern Iraq in Kikuk, a city made up of Arabs, Persians, Kurds, Turkoman, and adherents of Islam, Christianity, Judaism, and Zorastrianism. His experiences there further broadened his awareness, and in 1976, from a climate highly unfavorable to contemporary poetic expression, he escaped through the northwest border of Iraq across Turkey, Bulgaria, and Romania, to reach Poland, where he obtained a scholarship. He was welcomed warmly in Krakow, and stayed on to graduate from Warsaw University in drama. Despite the censorship of the communist government, Janabi found Poland a place where he was freer to express himself than Iraq, particularly since he did not write in Polish. 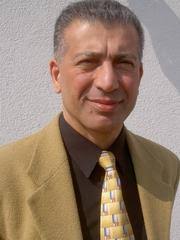 Except for a period of time in Algeria and as a guest professor at Indiana University, he has remained in Poland and has become a Polish citizen.


The background of these dramatic events—his early experiences in a multi-religious environment and his continued feelings of exile—is necessary to understand his poetry. For Janabi’s poems combine a dramatic sense of grievance, a resigned desperation, and several comic effects, all woven together in associative processes and often extreme surreal imagery. At times the poems seem “to gesticulate wildly,” and other times to be “subdued and pensive.” But all are passionate and serious, and cannot be lightly dismissed.


Accordingly, there is a power in Questions and Their Retinue that one rarely finds in contemporary American or European poetry. Janabi’s sense of history, of aggravation, disgust, even hate, are balanced by radical poetic techniques that push against the often self-righteous sounding rhetoric of his poems. The result is truly quite amazing, as the reader is carried along by the outpouring of imagery that at its most extreme is almost comic; but, the, just as quick is drawn back to language and form.


There are many wonderful poems in this revelatory volume, but in particular I was struck by “Questions and Their Retinue,” “Open Form,” “Poems without a Shelter,” and “Poems of the New Regions.” Below is a selection from the last named poem: