journey to the house of shaws
by Douglas Messerli


For a reader uninitiated to the numerous literary references and, more importantly, the use throughout this work of what Peter Riley has called “a more-or-less synthetic Scots”—a language found by the author in an old dictionary of the Scots language, filled with “strange, vaguely familiar word” that had “almost but not entirely shaken loose from their referents”—reading David Kinloch’s 2005 collection of poetry, In My Father’s House, may be a challenging task. Fortunately, the book is worth any effort and the author is more than willing to help the reader along in his stunning presentation of his love of language.
The very first poem of the book, “I Set Off Upon My Journey to the House of Shaws,” states the underlying theme of the collection—the death of the poet’s beloved father—and reveals the associative relationship of words throughout the text. The poem begins with a fairly straight-forward statement of his father’s death and the receipt of a letter bearing “the story of inheritance, / a round giftie, a square giftie and the niceties will fall away.” One quickly perceives, however, that the “giftie” the poet receives is not material as much as a thing of language; as he sets off to “the Tower of Living Stone,” the poet is confused by his journey:


The key is in the meaning: one has only to “prospect” the “sediment” of “shaw,” to explore the etymological remnants of the word—so my Webster’s dictionary (along with the poem) points out—that signifies a small thicket (from the Scottish, “the stalks and leaves of potatoes, turnips, and other cultivated root plants,” or what the poet describes as “compacted ‘foliage of esculent roots’”) which, in its deeper teutonic meaning signified “schawe,” a wood, a grove. The poet tips his hand, helping the reader work within a process he must employ throughout the rest of the book:

see how simply the floors
collapse upon each other
from the impact of overloaded words:

And in a schaw, a litill thar beside
Thai lugyt thaim, for it was nere the nycht
From the wood which gives shade, also comes the word “shadow,” which relates to the “schawaldouris,” the wanderers of the woods taken in mid-life, the ghosts among the “tubers of tall towers.” In short, through his association of words, his father’s death does indeed send him—along with his reader—on a journey to “the House of Shaws.” 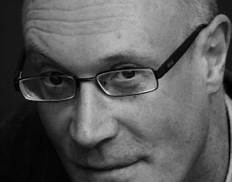 Many of the poems contained in this volume, accordingly, concern ghosts, not only the ghost and the accompanying memories of his dead father, but the ghosts of other great men and poets who dissected the dead—whether they be the noted doctors Sir John Finch and Sir Thomas Baines or the great literary dissector of death, Paul Celan. Some of the most touching poems in this volume are Kinloch’s fascinating “translations” of Celan—which he describes as works written “after” or “eftir the German”—into the Scots language of his father’s old dictionary.
His “Ye caun tristly,” for example, is written after Celan’s “Du Darst mich getrost,” translated into English by Pierre Joris as:

you may confidently
regale me with snow:
as often as I strode through summer
shoulder to shoulder with the mulberry tree,
its youngest leaf
shrieked.


The poet tells us that “traistly” means “safely, “ser” serve, and “skreicht,” screeched. In both versions, we clearly recognize that the summer walk through the “schwa” was so painfully beautiful that the poet is willing to be “entertained” by or served up the snow (what we recognize as standard symbol of death) as reward. The “skreicht,” closer to Celan’s German “schrie,” more clearly suggests the anguished scream of that exquisite suffering than the appropriate modern English word “shriek.”
Kinloch’s own appropriation of the language of the Scots dictionary, in fact, is close to Celan’s appropriation of German and the various obscure word combinations he created in his poetry. There is, moreover, an elegiac tone to Kinloch’s work as he struggles through his linguistic layerings to further understand his father and his relationship to him. But the distance between the two is not only one of age and cultural roots grounded in different “languages,” but lies in other deeply “buried” languages determined by education and sexuality. “Inquisition,” in which the poet answers an interviewer’s question about homosexuality, openly admits to the inevitable gap between two loving beings:

The interviewer asks me
‘what your father would have
thought of it had he lived?’
when I know he knew,

dodged it every time he looked at me
because I was a mirror
and mourn him every day
because he died before he ever got to know me.


The fundamental concerns with association and miscomprehension are expressed in more joyous and loony ways in Kinloch’s heady satire of Roussel’s Impressions of Africa, in which the “father,” this time portrayed as a survivor of a shipwreck, entertains the King of Talou with elaborately ongoing performances of The Mikado—to which he attaches stories of Stanley and Livingstone—that move through the various villages of the Taloulian empire.
Ultimately, we realize that this stunning interweaving of various languages and cultures is, like Penelope’s daily act, a way of coping with grief and loss:

A is for abbé, for abba
—that’s ‘Daddy’ in Hebrew,
Father of rose and clerestory—
a rhyme scheme to tie
this meandering grief
down to the point of its pain.


That Kinloch so brilliantly engages the reader in his “meandering” journey of grief is a testament to his embracement of so many linguistic realities through time and space. And in a sense, and in a time when so many would isolate themselves in their own wails of suffering, Kinloch helps us to understand that grief can and must be shared—even the “soundless screams” of a boy in Bialystock, of a Dreyfus or Anne Frank, a Pagliaccio—in order for mankind to survive.

Posted by Douglas Messerli at 2:00 AM