For an excellent interview with Bill Berkson by Thomas Devaney, click below:
http://jacket2.org/interviews/education-poetry 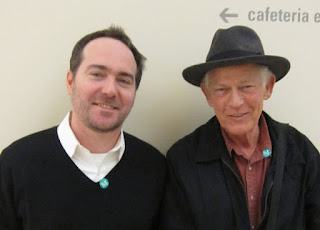 Posted by Douglas Messerli at 3:02 PM No comments:

Jayne Cortez [Sallie Jayne Richardson] (USA)
1934-2012
Jayne Cortez was born on May 10, 1934 on the Fort Huachuca, Arizona Army base, the daughter of a career soldier who served in both world wars.

At 7, Cortez and her family moved to Los Angeles, where she grew up in the Black Watts district of the city. Loving jazz and Latin recordings, Cortez studied art, music, and drama, attending Compton Community College after high school. As she began her career in poetry, Jayne took on the name of her maternal grandmother.
Inspired, as she chose to describe it, by Black writers Langston Hughes, Aimé Césaire, Léon Damas, Christopher Okigbo, Henry Dumas, Amiri Baraka, and Richard Wright, Cortez also derived performative influences by Bessie Smith, and numerous other jazz performers. Her own poetry is, in fact, jazz inspired, and her words, while written, were often chanted, and spoken in rhythmic repetition that resembled the intricate, tactile language of African and Caribbean drumming. 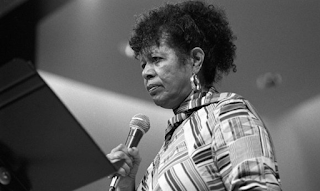 Her first book, Pissstained Stairs and the Monkey Man's Wares, was published in 1969 by Phrase Text, and her next four books were published by the press she established, Bola. As she as written of her own poetic writing: “I use dreams, the subconscious and the real objects, and I open up the body and use organs, and I sink them into words. I guess the poetry is like a festival. Everything can be transformed.
In 1954, Cortez married jazz performer, Ornette Coleman, a marriage which produced now jazz drummer, Denardo Coleman. They divorced in 1964. In 1975, Cortez married painter, sculptor, and printmaker Melvin Edwards. His work has appeared in her publications as well as on some of her album covers.
In 1991, along with Ghanaian writer Ama Ata Aidoo, Cortez founded the Organization of Women Writers of Africa (OWWA), of which she was president. She was organizer of "Slave Routes: The Long Memory" (2000) and "Yari Yari Pamberi: Black Women Writers Dissecting Globalization" (2004), both international conferences held at New York University. She appeared on screen in the films Women In Jazz and Poetry in Motion. Ms. Cortez also directed Yari Yari: Black Women Writers and the Future (1999), which documented panels, readings and performances held during the first major international literary conference on women of African descent.
She also founded the Watts Repertory Theater Company, a group focused on revealing racial equalities.
Cortez split her time between Los Angeles and Dakar, Senegal, where she, she claimed, she felt most at home. She died in New York City on December 28, 2012 of heart failure.
BOOKS OF POETRY


For a larger selection of poems, click below:
http://www.afropoets.net/jaynecortez.html

Posted by Douglas Messerli at 1:55 PM No comments:


Born on December 8, 1875 in Tsushima, Japan, near Nagoya, Yone Noguchi attended Keio University, but left for the United States before graduating. In San Francisco, Noguchi worked for a while as a servant to raise money to attend Stanford, before becoming involved with a newspaper run by Japanese exiles associated with the Freedom and People’s Rights Movement. After studying for some months in a preparatory school, Noguchi visted the Oakland hillside home of Joaquin Miller, who encouraged him to become a poet, introducing Noguchi to several San Francisco Bay bohemian writers, including Gelett Burgess—who published some of Noguchi’s poems in the small journal Lark), Ina Coolbrith, Edwin Markham, Adeline Knapp, Blanche Partington, and Charles Warren Stoddard, the last of whom Noguchi fell in love, developing a passionate correspondence with Stoddard, who lived in Washington, D.C.
In 1897, Noguchi published two books of poetry, following them with a novel, The American Diary of a Japanese Girl (1902) and another fiction, The American Letters of a Japanese Parlor Maid (1905). His third book of poetry, From the Eastern Sea, received some attention. Soon after, Noguchi traveled to London, making connections with major poets of the era, including William Michael Rosetti, Laurence Binyon, William Butler Yeats, Thomas Hardy, Laurence Housman, and Arthur Symons. 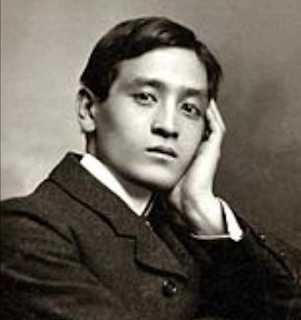 Upon his return to the US in 1903, and in New York developed relationships with Zona Gale, Edmund Clarence Stedman, and others. Yet the poet continued to have difficulties being published in English until the Russo-Japanese War of 1904, when he suddenly was encouraged to write on numerous Japanese subjects, including a article, “A Proposal to American Poets,” in which he suggested they try writing Japanese hokku.
Having secretly married Leonie Gilmour, he broke off their relationship in the early months of 1904, determining to return to Japan in 1904 to become a professor of English at Keio University. There he also planned a marriage to Washington Post reporter, Ethel Ames, until he discovered that Leonie had given birth to a baby son in Los Angeles, Isamu, who would later grow up to be the famed sculptor, Isamu Noguchi.
Despite a visit from Leonie and Isamu in 1907, Noguchi by this time acquired a second wife, Matsu Takeda, a Japanese woman. Leonie and he formally divorced in 1909, although Leonie and her son continued to reside in Japan.
Noguchi continued to write in English after his return to Japan, becoming one of the major interpreters of Japanese culture for the US and Great Britain. His 1909 collection of poems, Pilgrimage, received some international attention, and his work became admired by figures such as Ezra Pound and Arthur Symons, who described the poet as a “scarcely to be apprehended personality."
In 1913 he made a second voyage to England, reading at Oxford upon the invitation of poet laureate, Robert Bridges. His work soon after appeared in the pages of Poetry, where he was hailed as a pioneering modernist. But by the second decade Noguchi’s poetry, seemingly traditionalist, fell out of vogue.
In the 1930s, Noguchi, formerly associated with leftist magazines, turned, like much of the country, to the right. Because of his friendship with Indian poet Rabindranath Tagore, Noguchi was sent to India by the Japanese government with the hope of gaining favor there of the militant imperialism on the rise. During World War II, the poet avidly stood behind the Japanese cause, turning his back on his former Western ties.
After reconciling with his son, Isamu, Noguchi died of stomach cancer in 1947. His selected poems were published by Fairleigh Dickinson University Press.
BOOKS OF POETRY

The Ghost of the Abyss


My dreams rise when the rain falls; the sudden songs
Flow about my ears as the clouds in June;
And the footsteps, lighter than the heart of wind,
Beat, now high, then low, before my dream-flaming eyes.


“Who am I?” said I. “Ghost of abyss,” a Voice replied,
“Piling an empty stone of song on darkness of night,
Dancing wild as a fire only to vanish away.”


Out of the deep and the dark
A sparkling mystery, a shape,
Something perfect,
Comes like the stir of the day:
One whose breath is an odor,
Whose eyes show the road to stars,
The breeze in his face,
The glory of heaven on his back.
He steps like a vision hung in air,
Diffusing the passion of eternity;
His abode is the sunlight of morn,
The music of his eve his speech:
In his sight
One shall turn from the dust of the grave,
And move upward to the woodland.

Posted by Douglas Messerli at 12:12 PM No comments:

[On March 11, 2011, northeastern Japan suffered a massive earthquake that left nearly 16,000 people dead or missing and many others injured. Soon afterward, the editors of Gendai shi techo (Japan's foremost magazine of contemporary poetry) and the Asahi Shinbun (one of Japan's largest newspapers) collaborated to commission and publish a series of works about the disaster, all written by Japan's foremost poets. The following poem was Hiromi Itō 's contribution to the project. This translation first appeared in Poetry Kanto, vol. 28 (2012). (J.A.)] 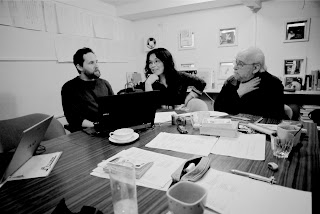