Born in Sugamo, Tokyo, on March 18, 1923, Tamura Ryūichi graduated in the Literature Department of Meiji University, where he had met a group of younger poets interested in modernism.
In 1943 he was drafted into the Imperial Japanese Navy, and, although he did not see combat, the experience profoundly affected by the deaths of several of his close friends. 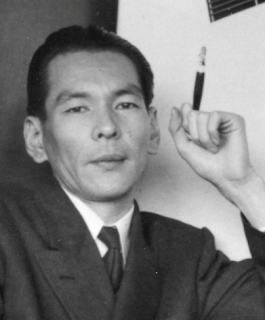 In 1947, Tamura revived the literary magazine Arechi (The Waste Land), further linking himself with his teacher, the great modernist poet, Hagiwara Sakutarō. Through the magazine’s publication and three anthologies of “Wasteland” poems, a group of poets came to be associated with it, particularly Ōoka Makoto and Kitamura Tarō. Tamara’s first book of poetry, Yonsen no hi yoru (Four Thousand Days and Nights) demonstrated his modernist sensibility, his attempt to, as Christopher Drake writes “ways to bypass the old anti-philosophical Japanese lyric mode.” By 1962, with the publication of Kotoba no nai seki (World Without Words), Tamura was established as a major poet, winning the first Kotarō Takamura Award.
From 1967-1968, the poet was a guest writer at the University of Iowa’s International Writing Program, later traveling to England, Scotland, and India, while continuing to publish new work during this period.
In 1993 Tamura won the Contemporary Poets Award for his collection, The Hummingbird, and in 1998 he was awarded the 54th Japan Academy of Arts Award for Poetry. That same year he died of esophageal cancer.
BOOKS OF POETRY


Every Morning After Killing Thousands of Angels


I read a boy’s poem called
“Every Morning After Killing Thousands of Angels”
I forget the poem, but the title won’t leave me
I drink some coffee
read a paper read by millions
all the misery
all the destruction in the world
herded into headlines and catch phrases
the only part I trust
is the financial page
a completely blank space governed
by the mechanics of capital and pure speculation

That boy’s mornings
And my mornings—
How are they different?

But the boy can see the angels’ faces


What do you do
After you kill them?


I go out walking


To a river with a very big bridge over it


Every morning
while my hands are still bloody

I can’t kill thousands of angels
but I walk a dry path to the beach
the hot sky’s still filled
with sweating typhoon clouds
the sea’s a later color
fall is not summer at the horizon
narrow streams run through
spaces silted with darkness
weak-looking capillaries float on my thin hands:
no place to anchor a big bridge


It’s my turn now
I’ll tell you about the world
at the far end of the bridge
the shadow world
things and concepts totally shadow
shadows feeding on shadows
spreading, radiating like cancer cells
decomposing organs of drowned bodies
green thought swelling and distending
medieval markets surging with merchants and prostitutes and monks
cats, sheep hogs, horses, cows
every kind of meat on the butcher shop hooks
but blood anywhere

So I can’t see the bridge
unless I kill thousands of angels?

What sight excites me most sexually?
the bridge has disappeared
a riderless black horse
crosses the world of light
slowly, toward the shadow world
but exhausted, it falls
crying animal tears but not rotting
gleaming directly to bone
pure white bone
and then to earth
and then
dawn comes
I’ve got to go out and live
after killing
killing thousands of angels

—Translated from the Japanese by Christopher Drake


—Translated from the Japanese by Christopher Drake


Posted by Douglas Messerli at 1:42 AM