Keith Waldrop (USA)
1932
Born in Emporia, Kansas on December 11, 1932, Keith Waldrop entered the Kansas State Teachers College as a pre-med student, studies were interrupted by his being drafted in 1953. Ultimately, he received his B.A. from Kansas State Teachers College in 1955, his M.A. in 1958, and a Ph.D., in comparative literature from the University of Michigan in 1964. Waldrop has taught at Wayne State University, Wesleyan University, and from 1968-2001, at Brown University, where he is now Brooke Russell Astor Professor, emeritus of the Humanities. 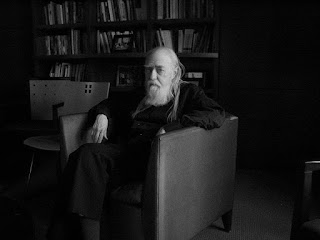 With his wife, Rosmarie Waldrop, Keith founded Burning Deck press, which began publishing a wide range of contemporary American and European writers. His first chapbook of poetry, Keith Tank Line, appeared in 1966, followed by numerous books of poetry, chapbooks, collaborations, and books of translation. Among his dozens of poetry books are The Windmill Near Calvary (1968), The Garden of Effort (1975), Windfall Losses (1977), The Space of Half an Hour (1983), A Ceremony of Somewhere Else (1984), Hegel’s Family: serious variations (1989), Shipwreck in Haven: transcendental studies (1991), The Silhouette of the Bridge (1997), The House Seen from Nowhere (2002), and Songs from the Decline of the West (2003). In 2009 Waldrop received the National Book Award in Poetry for Transcendental Studies (University of California Press).
Often using collage techniques in his writing, Waldrop notes:


Collage is for me a way to explore, not necessarily the
thing I am tearing up, but the thing I am contriving to
build out of torn pieces.To the extent that there is a
purpose to what I do, its end is the “enjoyment of a
composition”—a concern, as Whitehead notes,common
to aesthetics and logic.


Among the many poets he has translated into English are Claude Royet-Journoud, Edmond Jabès, Anne-Marie Albiach, André Breton, Xue Di, Pierre Reverdy, Jean Grosjean, and Charles Baudelaire.
Waldrop has received two NEA translation fellowship, stipends from the Amy Lowell Traveling Poetry Fellowship, a DAAD Berlin Artists Program fellowship, the Pell Award for Excellence in the Arts, and a grant from the Fund for Poetry. The French government awarded him a “Chevalier des arts et des lettres.”
Waldrop also has published a biographical fiction, Light While There Is Light: An American History (Sun & Moon Press, 1993).


“they knew that they were naked”


between tones (de-
caying) there is
space, and yet


bridge of light (star-
shower, swing
of the earth)


circle
described about a
focus

consider a body
disturbed in this

motion, consider
the fact of


the rest of the earth


the flash, the
report


I go to the
masquerade as Is

in the long perspective of
sky

after some
while, to
persuade himself
as the snows
pile

all things, he
thinks
think, by some
mortal link


light bent just
so, into figures of
common sight


white cloud and
thunder, under
rowdy skies, day
swallowed up


moats
filled with
rubbish and roly-
polies, Jesus Christ beside
Pompey in the Holy-
of-Holies


no Lord in this
devil of a
rain, hailstones hacking
valleys out of plain


straining to
follow dis-
appearing light
his eyes ablaze with
night
For a selection of other of his poems, go here: https://www.poetryfoundation.org/poets/keith-waldrop

Posted by Douglas Messerli at 3:37 AM