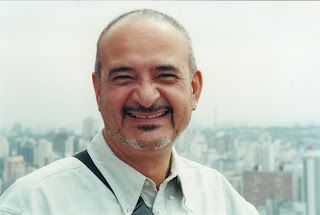 Costa’s poetry evinces a high wit and a strong visual texture, along with his active concerns for the rights of homosexuals. Among his several book publications are 28 poemas 6 contos (1981), Satori (1989), O livro dos fracta (1990), The very short stories (1991), Los jardines y los poetas (a bilingual Spanish-Portuguese anthology, 1993), O meinino e o travesseiro (1994), and Quadragésimo (1998). In addition to extensive critical writhing, Costa has translated the poetry of authors such as Elizabeth Bishop and Octavio Paz into Portuguese.
The poet's most recent book of criticism is Retratos do Brasil Homossexual (São Paulo, 2010).
Costa and his husband divide their time between São Paulo and Rio de Janeiro.


vampire face, life-battered nose,
stiffness your immoderate pride,
the corners of your smile drawn down without irony,
I do not see your hands, they might be writing,
they might be manipulating syntax’s abacus,
I see you absorbed in seeking dormant treasures,
larvae shimmer on the white page,
and your sphinx eyes, now fixed, penetrate me
they imitate your fan-like ears, your full cloak,
a mass of velvet or wool, Director always
of a baroque hospital before the Grand Renfermement,
for whom do you pose? You sing of the Esgueva
of your contemporaries’ thought, the radical sigh
of Nature in deep heat, lacteal language, azure field,
and you value me, Acis without, Polyphemus within,
this is the world Don Luis, you are sitting for me,
distinguished pre Kafkian cockroach goes from ante
to anteroom, patiently expounds his emphatic elastic decorum,
this much you must put up with, Jekyll without,
so small within, because you are child and beyond
the canvas’ frame you speak s blacks do—it is at night
that banality becomes a pearl, and your baldness fills the sky,
the void yields, and a lullaby escapes your word.


—Translated from the Portuguese by Martha Black Jordan

Behind the taxidermist, there’s the straw
behind the rhinoceros, the savannah,
behind this writing only the night,
night which gallops to the fore.


The moon leaps from the butterfly’s wing,
the sun shines on the head of a pin,
a black sun thrums through these lines,
star now rising on the horizon.


The desiccated animal of syntax
furnishes the word, the frame and the label
of a collection deader than the dead.


In the natural history collection
the visiting reader pauses alongside
shining mammals and insects.

—Translated from the Portuguese by Martha Black Jordan


Translation copyright ©1997 by Martha Black Jordon, from The PIP Poetry of World Poetry of the 20th Century, Volume 3: Nothing the Sun Could Not Explain—20 Contemporary Brazilian Poets (Los Angeles: Green Integer, 2003), Reprinted by permission of Green Integer.
For two other poems in English, go here: https://www.wordswithoutborders.org/contributor/horacio-costa


Posted by Douglas Messerli at 5:30 AM