Born on March 1, 1900 into a Quaker family living in Scotswood-on-Tyne, Northumberland, Basil Bunting studied at the Quaker school in Yorkshire, Ackworth School and in Berkshire, Leighton Park School. That education had a strong effect on his later opposition to World War I, during which he was arrested as a conscientious objector and was sentenced time in the Wormwood Scrubs and Winchester prisons. Bunting described later described himself as having an interest in “Jails and the sea, Quaker mysticism and socialist politics, [with] a lasting unlucky passion, the slums of Lambeth and Hoxton….” His first major poem, “Villon” (1925), expressed several these interests.
Traumatized by his time in prison, Bunting moved to London, where he attended the London School of Economics, coming into contact with Bohemian journalist and writers. Bunting was introduced to the writings of Ezra Pound by his friend Nina Hamnett. Poet Mina Loy was instrumental in his transferring to Paris. 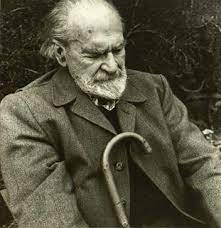 Traveling through Northern Europe, Bunting dropped out with a degree, and in Paris finally met Pound, later traveling to Rapallo, Italy, to revisit Pound, settling there with his family from 1931-1933. Pound, in turn, introduced Bunting to Louis Zukofsky, who, although with Pound, helped become published in the Objectivist issue of Poetry magazine, in the Objectivist Anthology, and in Pound’s Active Anthology.
During World War II, Bunting served in the British Military in Intelligence in what was then Persia, continuing after the war on the British Embassy staff in Tehran, only to be expelled by Muhammad Mussadegh in 1952.
During the 1960s younger poets such as Tom Pickard and Jonathan Williams rediscovered Bunting’s writing, while Bunting went on to write some of his most important works, including Briggflatts, a poetic autobiography, in 1966. His Collected Poems was published by Fulcrum Press in 1968, and reprinted by Oxford University Press in 1978, with a second edition appearing in 1980.
Bunting died in Hexham, Northumberland in 1985.
BOOKS OF POETRY


For a filmed reading of Basil Bunting, link here:
http://www.youtube.com/watch?v=eZ7greLmS3I


For a large selection of taped readings of Bunting, click below:
http://writing.upenn.edu/pennsound/x/Bunting.php

Posted by Douglas Messerli at 3:10 AM