Said [b. Iran/Germany]
1947-2021
Born in Teheran in 1947, Said left his home country at the age of 17 and has been living in Munich since. After the Shah was toppled in 1979, Said returned briefly to Iran, but could not see a future for himself under the reign of the mullahs. Although raised in a Muslim country, his liberal family did not impose religion upon him, and he never practiced Islam. In his essay "Why I Am Not a Muslim," Said explains the contradiction between the desire for spirituality that protects and liberates the individual and the disaster of state-sponsored Islamist terror. 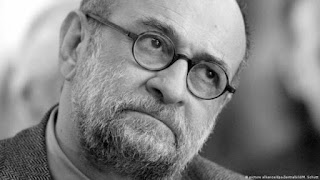 
From Be to Me the Night


“We two, how long we were fool’d”
Walt Whitman
She murmured to me
from amidst the crowd,
in the mother tongue of Death.

Not a single word,
wrinkled
you dress
lay beneath us
listening


Saying nothing,
she acquiesced.
I proclaimed her
a magnolia
and teased her into shape—
for my hands.
She accepted these devotions

Before you came
the wind had
no voice of its own,
the sea concealed its waves
in the deep,
and there was much talk
of the silence of fish


I know nothing
of it.
Only your eyes
and their shadows
can tell.


Other than your closed eyelids
what proof is there
of the night?

The moon, returning
will not find us.

Your fingers,
a new prayer
I’ve discovered,
gathered in my palms—
for harder days to come,
for longer nights.


She lay on her back
against the wind,
her eyes closed,
waiting
for the moon
to silver her indifferent hand.
She looked
to the wind
for seed and oblivion.


The dried larkspur,
ripe from the dark,
the jagged contours of the night,
the barbarian’s spiced flesh
on your bones—
the mouthslave and I.


And we forgot
the night,
its language even;
so silent
were our prayers.
Overhead
a bunch of useless moons.


For me
your hands smell of nutmeg
and childhood days.


For me
your mouth is a gentle shore,
brimming over unguarded.

For me
the blue of your eyes
has withdrawn to my fleet.
We sleep on the river bed.
Fishes from days gone by
come and kiss our toes.

Never shall we abandon
the open city
between your tamed skin
and my able kisses.

Your sleep
in my arms,
deep and uncowed.
Your forgotten hand
on my mouth.


—Translated from the German by Hans-Christian Oeser

For a selection of poetry by Said, click here:
http://www.poetryfoundation.org/poetrymagazine/poem/243622

Posted by Douglas Messerli at 3:19 AM