One of the most influential of all Arab women writers, Nazik al-Mala'ka was born in 1922 to a cultured Baghdad family. Her mother was a poet (writing under the name of Omm Nizar Al-Mala'ka) and her father a teacher as well as the editor of a 20-volume encyclopedia.
Al-Mala'ka began writing as a child, composing her first classical Arabic poetry at the age of ten. She was educated at the Higher Teachers' Training College in Baghdad, publishing poems while in college in several newspapers and magazines.
She studied in the department of Fine Arts and attended classes in acting. Her knowledge of English brought her to Princeton University on a scholarship. In 1954 she continued her studies at the University of Wisconsin, receiving a M.A. in literature, working for several years as a university lecturer and professor.
In 1961 she married Abdel-Hadi Mahbouba, a former colleague in the Arabic department at the College in Bagdad. With her husband al-Mala'ka helped to found the University of Basra in southern Iraq before beginning to teach for a number of years at the University of Kuwait.
In 1990 she was forced to return to Iraq by Saddam's invasion, but fled the country to Cairo, avoiding publicity for many years. In 1999 she reentered the literary scene with a new book of poetry, Youghiyar Alouanah Al-Bahr, which also contained an autobiographical sketch. 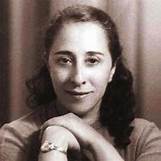 Al-Mala'ka's first book, A'shiqat Al-Layl, appeared in 1947, expressing themes of despair and disillusion traditionally in Arabic literary romanticism of the 1930s and 1940. Her second collection, however, Shazaya wa ramad (Ashes and Shrapnel) was written in free verse, and helped to bring about a new avant-garde in Arab poetry. Throughout the 1950s, al-Mala'ka was among the most prominent figures of modernism, writing numerous articles on metrics and taking strong positions as a defender of women's rights, as well as lecturing on women's position in a patriarchal society. Her collected essays, Qadaya 'l-shi'r al-mu'asir was published in 1962.
Her later poetry distanced her from her early experimentalism as she developed more moralistic and conservative views, expressed in outwardly religious poems.
Al-Mala'ka died of the effects of Parkinson's Disease in 2007.

Revolt Against the Sun: The Selected Poetry of Nazik al-Mala'ka, A Bilingual Reader (trans. by Emily Drumsta)(London: Saqi Books, 2020)


For a reading in Arabic by the poet, click here:
http://www.youtube.com/watch?feature=player_embedded&v=0WmBNzFI8IA

The Visitor Who Never Came


The evening has passed and the moon will soon vanish
We are prepared to bid another night farewell
Witnessing how happiness can leave us
You did not come, lost instead with other dreams
You left your chair
Engaging our dull circle
In clamorous questions about


I didn't know your disappearing all these years
Would leave your shadow in every sense of every word
And all dreams in every corner, every curve
I didn't know how you could overpower these people here
A hundred guest lost
In a moment of desire
As it ebbs and flows in yearning for


If you came, if we sat with all the others
As conversation gains its power among friends
Would you just become another guest with evening at an end
Both of us, our eyes turning, still in search?
We'd ask the empty seats about
Those we missed at meetings past
Crying out that among them was


And if you came one day (it's better that you don't)
The fragrance of that flowering world would leave my memory
The wings of wonder would be clipped and my songs sad
My hands would hold the fragments of my innocent hope.
I love you as a dream
If you come as flesh and bone
I still would dream of the impossible

The visitor who never came

—Translated from the Arabic by Matthew Sorenson and Christopher Middleton


Veiled Utopia.
A haven of magic, we were told
It was.
Made of nectar and twilight roses,
Of tenderness and gold.
In it, they said, was
The panacea for the wounds of man.
We wanted it, but didn't get it.
Back to our hopes, miserable and unfulfilled.
Where is this land?
Are we to see it or
is it to stay enveloped, unattainable
Agitating inside us only
A numbed yearning?
A prayer
Within closed lips?
The millions are
A torrent of desire,
Burning desire,
And a dream of flame.
Open the gates for thousands
Of exhausted victims are screaming.
Posted by Douglas Messerli at 6:19 AM