"XUL" | review by Douglas Messerli (of The XUL Reader)

translated from the Spanish by Jorge Guitart, Kathryn A. Kopple, G. J. Racz, Garciela Sidolai, and

The Argentine magazine XUL began publishing, with Jorge Santiago Perednik as editor, in the beginning of the 1980s, at the height of the mad military dictatorship that killed thousands of individuals. As editor of the The XUL Reader (a collection of writings from the journal) Ernesto Livron Grossman writes, the poetry of its contributors was, in part, a reaction to the regime; but unlike the guerilla movements of the political left—with whom many contributors shared sympathies—the resistance took language itself as its method and subject. Like the American “Language” poets, the XUL writers sought in the purposeful complexity and density of words a way to resist the failed language of seemingly “transparent” statements of both sides, both the victims and the victimizers, who as the editor points out, were interdependent for their existence. Like their American counterparts, these Argentine poets sought models in the avant-garde of the past, most particularly in the vernacular-based poetry of the gaucho (or cowboy) poems, and in avant-gardists such as Oliverio Girondo, Xul Solar (one of the sources of the magazine’s name), Osvaldo Lamborghini, and more recent authors such as Jorge Luis Borges and the Brazilian concretist Augusto de Campos. 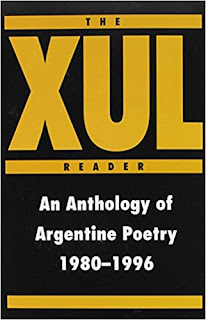 Writing in their fourth issue, a collective of XUL poets argued that their goal was to “translate.” “To translate is to work in one language from another. Translating is the linguistic exercise that most privileges the breach between two texts because it is actually a previous reading that produces a new text in which writing claims to make a former text legible even as it disrupts and obfuscates one text by subtracting from it a legibility that it confers on another…. Translation only acquires significance, as far as XUL is concerned, when it affirms itself as a writing process that voluntarily exhibits its relation to other texts.” A little further in this statement the XUL writers proclaim what might have as easily appeared in the pages of L=A=N=G=U=A=G=E magazine (edited by Bruce Andrews and Charles Bernstein): “XUL’s commitment to reality is actually a commitment to language: to again make legible that which has been used for coercion and deception. Language belongs to everyone.” 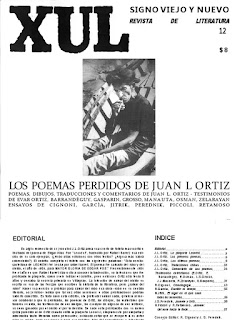 This revelatory anthology begins with a few examples of the historical influences upon the XUL writers, themselves (particularly Girondo and Xul Solar) worthy of further exploration, and then presents work selected from the ten issues of the journal. Each reader will find his or her own favorites, but given the context of the few pages devoted to each poet, I was most impressed by the work of Laura Klein, Néstor Perlongher, Susana Cerdá, Ernesto Livon Grosman, and the XUL editor Jorge Santiago Perednik. I was less taken with the concretist-influenced work as in the poetry of Arturo Carrera, Gustavo Röessler, and Jorge Lépore—but that may be just my own aesthetic at work or a product of the anthologizing. The important thing is that this is a truly brilliant collection of writing that cannot be ignored by anyone interested in contemporary, innovative poetry.   Although the poems are presented bilingually, I do wish the Spanish had appeared enface instead of in small type at the bottom of each page; and I am desperate for biographical material and source information for the poets included. But these are small quibbles with a book of such significance.
Posted by Douglas Messerli at 7:55 AM No comments: