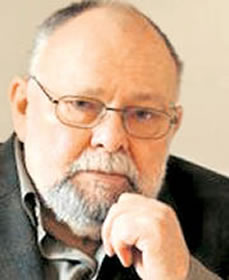 Born in Schleife (Slepo) Germany on March 4, 1938, Kito Lorenc was the grandson of the noted Sorbian prose writer, Jackub Lorenc-Zalĕski.  He attended high school in Cottbus. From 1956-1961, Lorenc attended Karl Marx University in Leipzig, majoring in Slavic Studies, eventually joining the Institute for Sorbian Studies in Bautzen.
A leading exponent of the Sorbian language spoken by a national minority in the former East Germany, Lorenc worked as the dramaturge at the State Ensemble for Sorbian People's Culture from 1972-1979.
He now lives in Wuischke where he works as a freelance writer.
He has twice been awarded the Heinrich Mann Prize, in 1974 and 1991, and he won the Lessing Prize in 2009 and the Petraca-Preis in 2012.
Lorenc has translated several books into Sorbian and written poetry in both German and his native language. He edited an anthology of Sorbian poetry, Light, Justice and Freedom, in 1963.
BOOKS OF POETRY


In Robert Elsie, Ed. An Anthology of Sorbian Poetry from the 16th-20th Centuries, trans. by Robert Elsie (London and Boston: UNESCO/Forrest Books, 1990)


A name (rivers).
We should call it out
Which yesterday
A man still bore.


Rivers (a name).
The baptist, thereafter
Coming out of the river, they say,
Did not recognize
The one he had
Just baptized
As the Messiah.
But how should he?
He was busy
Baptizing.


Rivers (a name).
The one from the family of the beaver*—
Rare today
Is the rare work
Of the beaver: felling
Wild tree trunks of sorrow,
Building barriers
Of love, of laughter,
And always
In these waves of language
Setting up
Dams of rhythm.

—Translated from the Sorbian by Robert Elsie


German poet Johannes Bobrowski died on 2 September 1965. His surname dervies from the Slavic word bobr for the beaver.


At the Winter Window

We waited
for the winter wren, the snow king,
not one bird
flew into the pane
The birch tree disappeared
and I bought another round
of white wine
Neighbor Glasseye said
IN THE OLD DAYS WE HAD TWO
SLEIGHS IN THE STALL
AND NOT THE
GHOST OF A HORSE
Then he roasted Subletter Steaks
on the flat-iron1
BUT IN THE LABORATORIES I SAID
NOW YOU CAN EVEN
MANUFACTURE WORMS
FROM A THOUSAND LITTLE PIECES
And so on.
Don’t ask me
what anyone else is running off
at the mouth about
At any rate no one came
by or only just
as I was away from the window


—Translated from the German by Elizabeth Oehlkers Wright


______
"Epitaph for Johannes Bobrowski" reprinted from Anthology of Sorbian Poetry (London/Boston: UNESCO/Forest Books, 1990). Copyright ©1990 by Robert Else
"At the Winter Window," copyright ©2008 by Elizabeth Oehlkers Wright.
Posted by Douglas Messerli at 1:33 AM