Dieter Gräf was born in 1960 in Ludwigshafen and now lives in Cologne. His first book of poetry, Rauschstudie: Vater + Sohn was published in 1994, and he followed that with two other successful volmes, Treibender Kopf of 1997 and Westrand of 2002. He edited an anthology of poetry, Das luechtrende Buch. Die Welt als Wunder im Gedict in 2004. 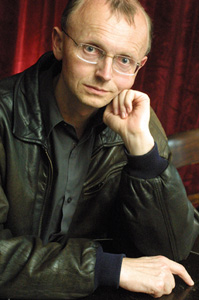 Gräf has also participated in multimedia collaborations, including the installation with Margret Eicher, Tussirecherche (Tussi Research). He has received the Leonce and Lena Prize from the city of Darmstadt in 1997 and held fellowships at the Literarisches Colloquium in Berlin (1966), the Villa Aurora in Los Angeles (1999), and Villa Massimo in Rome (2004).

His poetry explores issues of mythmaking, from myths of everyday life to those of ancient history as in the story of Gilgamesh.
He was had two books of poetry published in English from Green Integer, Tousled Beauty (2005) and Tussi Research (2007), and his poetry was included in the 2006 anthology, The PIP Anthology of World Poetry of the 20th Century, Volume 7: At Villa Aurora—Nine Contemporary Poets Writing in German, edited by Douglas Messerli.
BOOKS OF POETRY


Liquid Adam the feeler fish swam through,
first herringbone patter, deposited
by the one Lord. He assumes—contour,
the capsule. From now on ever stronger,
pressing ribs. As one, the poles move
inwards, schism proclaimed above, de
viation below: Eve giving gas, beamed
into the stone by now. There is a crumb
ling into the spacesuit, cells saturate
with unchewed capsules. That’s for trips,
all in the paradisiacal land “Cush”:
even little fists the keep getting
higher, yes, to the tangible, the beat
able. Rings around the planet, polished.


we who stay on the car
pet gently put our
selves into each other: how
first yours and then my
eyelids lowered as well,
you tousled beauty!; our
words nestled against each
other in the bath, like
the lovely folds on your
eyelid, after it closes,
and even when it
opens: this diving in
to you, slipping out of you,
and then again, toward the re
flection: to have two
bodies, these
curves,
hollows; become small,
stretch, yawn.

Drift with the Island


evening rush of rain from leaves
of the tree next door
going to
the moon side: to the tidal
patches, the giant saltmarsh
hares. Orange-red beak of
oystercatcher, its clear
signal sounds amid the mumur
of black-headed gulls; bird-field
crescendos. Glasswort eyes that
overgraze the silty mudflats; and
at night, it’s said, hedgehogs
ambush the bird eggs in
an orgiastic frenzy.
By day,
The reading room, seaside.
Swimming along beside the North
Sea, whose temperature’s wrong——