rowing up through the silence
by Douglas Messerli


Although I’ve never met Tomas Tranströmer nor his wife Monika “in the flesh,” my life seems oddly intertwined with theirs. 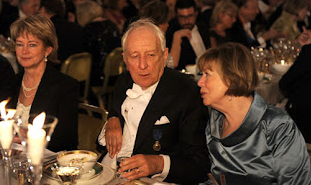 For years I had heard in the poetry circuit and through my Swedish friends about how remarkable Tomas Tranströmer’s work was. However, when I read the available translations of the day by May Swensen and Robert Bly, who helped to popularize his work in the US, I was unimpressed. The work seemed to be fairly conservative and the syntax not that highly interesting, so that I determined either he was not a very good poet or that these poems were badly translated. Certainly his work did not seem as exciting to me as Gunnar Eckelöf and others.
When I was teaching at the University of Maryland while in Graduate School, one of my best students, James Wine, now a long-time friend, took a couple of my courses, including a course I was teaching for the German department on Scandinavian fiction and another on Avant-Garde American Fiction. One day, he stopped by my office to talk to me. He was in quandary. His girlfriend, whom he declared he loved, was being sent back to Sweden, her Green Card having expired. Even with the help of his ex-ambassador father, they could not convince the authorities to let her stay. What was he to do? If he stayed in school to finish his degree, he might possibly lose her forever, but if he did follow her to Sweden, he might be unable to finish his education.
It was a kind of catch-22 I felt. Neither choice seemed acceptable. Although I’d never met Eva, I felt sure of Jim’s love for her, and I admired his intelligence. How was I to advise him, however, on such a personal matter?
“Well,” I pondered aloud, “you can always finish your education, but you mightn’t ever again find a woman whom you love as much as her.” He followed my advice and moved, temporarily, to Sweden. By accident, her family home was next door to the summer home of the Tranströmer’s, and before long Eva and Jim had become good friends with Tomas and Monica.
I suggested that Jim tell Tomas about the predicament of his work in the US. Although he was receiving attention for his poetry, it was apparently the “wrong kind” of attention, allaying him with the conservative visions of Bly’s “Deep Image,” instead of the more radical imagism that seemed to be in the work itself, writing closer to Jerome Rothenberg's and Robert Kelly's original, more radical notion of "deep image."
Time passed, and eventually New Directions published his entire oeuvre, quite nicely translated by Robin Fulton. Now I could read the work more sympathetically at least.
Also by coincidence, Tomas and Monica had befriended a young American translator Michael McGriff and his wife Mikaela Grassl, and gave him permission to translate a single-volume edition of Sorgengondolen (The Sorrow Gondola), a title that resolves the adjectivally based "Sad Gondola" of Fulton's translation. McGriff sent the translation to me at Green Integer, which I readily accepted, and in 2010 published.
A few short months later, Tranströmer, after years of expectation, was awarded the Nobel Prize, the Green Integer book being the most current translation. We had originally published 1,000 copies, and now immediately printed 5,000 more copies, the new edition touting the news of the Nobel Prize.
When I look back, accordingly, on my long resistance and ultimate appreciation of his work, it now appears that our relationship, as vague as it remains, seemed to be something fated.
State College, Pennsylvania, April 2, 2012
Presented as a lunch-time talk at a gathering of Comparative Literature students and professors at Pennsylvania State University on April 2, 2012.

Posted by Douglas Messerli at 9:25 AM