Morisseau-Leory was born in Grand-Gosier, Haiti on March 13, 1912. He spent most of his childhoon in Jacmel where at Condorcet Lerooy’s school, later transferring to the Lycée Pinchinat. He completed his education in Port-au-Prince, graduating from the Faculty of Law. 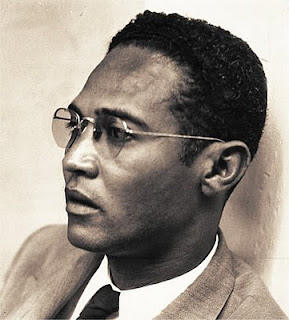 For a while he taught at Lycée Pinchinat, but was ultimately named chef de division at the Ministery of Public Instruction in 1941. After a period of study of education at Columbia University in New York City, Morisseu-Leroy became Director General of Education in Haiti.
Along with his position, the author also worked in journalist, becoming chief editor of the local paper of Jacmel, Sud-Quest, as well as contributing to several other newpapers and serving as editor of Le Matin.
His creative writing separated him from many of the French Haitian writers in that he chose to write for the masses, who primarily spoke the Creole language rather than standard French. In connection with that decision, he subjects, particularly in his fiction, were rustic, every day scenes, embracing colloquial languages. His careful analysis of the Haitian dialect of French, indeed, convinced him that it should be “dignified” as a national language. Particularly in Dyakout (a collection of poems) and his noted play Antigone, performed in Port-au-Prince in 1953, he demonstrated the richness of the Creole dialect, while reclaiming, altong with the efforts of Price-Mars and Jacques Roumain, the Haitian’s African roots.
That same year, he went into exile with his family, working for six years in Ghana for a UNESCO mission before establishing himself in Miami in the US, where he lived for the rest of his life. Despite increasingly blindness, the poet continued to write a weekly column in Haiti en Marche, and completed an epic novel Les Djons d'Haiti Tom. When the Haitian dictator Duvalier fell from power in 1986, Morisseau-Leroy briefly returned to Haiti for the inauguration of Aristide.
Besides writing several books of poetry, Morisseau-Leroy wrote several other plays and works of fiction, as well as numerous essays and other works. Three tales have been collected, translated by Peter Constantine, and published in the US.
Morisseau-Leroy died in 1958.
BOOKS OF POETRY
Pléntitude (Port-au-Prince: N. Telhomme, 1940); Natif-Natal (Port-au-Prince: Ed. Hatienne, 1948); Diacoute 1 (Port-au-Prince: H. Deschamps, 1953); Diacoute 2 (Montreal: Nouvelle Optique, 1972); Kasamanza (Dakar, Ghana: Nouvelles Editions Africaines, 1977); Dyakout 1, 2, 3, 4 (New York, 1990)
BOOKS IN ENGLISH TRANSLATION


Haitiad & Oddities , trans. by Jeffrey Knapp (Miami: Pantaléon Guilbaud, 1991)
I’m Taking a Little Trip to the Moon
I’m taking a little trip to the moon
I’ve had it with life down here
Around here everything’s sure hard
I’m on my way to the moon
They tell me up there there’s no such thing
As good and bad people
There’s no stupid guys or wise guys
No city or mountain people
All people are people on the moon
All people speak one language
I can’t hack it on earth anymore
Civilization’s exhausting me
Civilization’s scaring me
Wherever I turn I see
People killing people
Civilization has finished a long time ago
People there have forgotten that awful time


I’m taking a little trip to the moon
They tell me there’s no king there
No county sheriff
No justice of the peace
No baliff
No monseignor
I just gotta make that voyage to the moon
They tell me it’s beautiful there, just beautiful
Nights are clearer than daytime
There’s no time for a guy to sleep
No days for work of for play
Nights you watch the earth aglow
Brighter than the sun
And stars so Close as fireflies on trees
There’s no heat
No cold
No misery
No mud
Everyone’s forgotten about war
Forgotten about civilization
The way the old forget colic
Measles and teething
I’m gonna live on the moon
Evenings I’ll tell the kids stories
I’ll tell them that the whole time the earth turns
There’s a huge woman
An immense female werewolf
They call civilization
Crushing young men like ants.

—Translated from the Haitian Creole by Jack Hirschman and Boadiba
Posted by Douglas Messerli at 4:54 AM

Thank you for the bio of my friend Morriseau (Moriso).