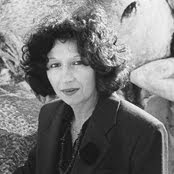 Born on April 13,1946, French poet, dramatist, and fiction writer Liliane Giraudon has lived for most of her life in Marseille, where she teaches in the public schools.
Giraudon's work might be described as trans-genre, as she moves with and against prose ("prose does not exist") and poetry ("a poem is never alone"). The writer has also worked collaboration with other writers and artists, and has been extremely active in the French literary scene, co-founding, with Jean-Jacques Viton, Banana Split and If and serving as an editor for the noted poetry journal Action poétique. She has also worked in video and other medias.
Her books of poetry include Têtes ravagées: Une Fresque, Je marche ou je m'endors, La Réserve, Quel jour sommes-nous, Divagation des chiens, and, most recently, La Poétesse. She also edited, with Henri Deluy, 29 femmes: Poésie en France depuis 1960 (1994).

Don't tell me you're fed up with writing poetry
that you can't write any other way
that reaching the end of the line is too trying
or tiring or worrisome like a road
climbing a staircase or the top of a tree
that darkening the surface of a page
is like singeing the tips of the fingers the nails
(Edgard Pinaud's nail polish no. 15, Seduction)
which smells of Onions Tulips.

Flesh is soft on the back of the shoulder

Don't tell me that the word date so and so
translates it by delicacy somebody else by desert fruit
that you don't give a damn
that the taste of dates is unique in an oasis
that the target language must retain the odor of the original
different after all from a plate of fruit spit up by a child
that that has nothing to do with it
once on the fire with a sprinkling of sugar
producing a scintillating preserve
served in the curve of a china bowl on a white tablecloth
deep in a garden by attentive hands
on a quiet morning promising unspeakable happiness
as rare as a pure heart
for translating is just a snapping jaw
open on a body to be covered by your own
until it disappears
until nothing is left
the inescapable trace of an invisible, persistent chain
left behind to deceive the reader to make him believe
the crossing was accomplished the road traveled
the translation made

Climbing into holes what an adventure
that's all I've ever done
flinging dirt over my shoulders
that's going the distance—attentive ear—
the feet beneath assembled moving
if I only had hooves
the cloven foot leaves better tracks in the mud
Io! Io! in the humid raw air
Ah my love! drain
drain me like a motor