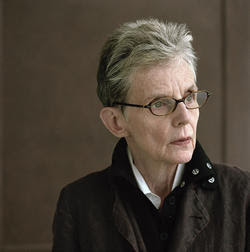 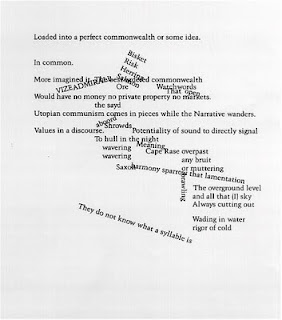 Born in Boston in 1937, Susan Howe grew up in Cambridge. Her mother, Mary Manning, of Irish birth, had written plays for and acted with the famed Abbey Theatre. Manning had close relationships with many of the noted Irish authors, including Samuel Beckett, and later would write the screenplay for Mary Ellen Bute's brilliant film, Passages from James Joyce's Finnegans Wake.

Her father, Mark DeWolfe Howe, was a professor at Harvard Law School, and her sister is the noted American poet and fiction writer Fanny Howe.

Susan graduated from the Boston Museum of Fine Arts in 1961, marrying the painter Harvey Quaytman, a marriage which produced a daughter, the artist R. H. Quaytman. The relationship ended in divorce.

Her third husband, Peter Hewitt Hare, a philosopher and Professor at the University of Buffalo, died in 2008.

Although Howe began as a artist, in the mid 1970s she turned to poetry, producing a series of small books, Hinge Picture, Secret History of the Dividing Line, The Western Borders, and Cabbage Gardens among them. These works, as well as her later mature writing, were steeped in history and used a somewhat fragmented language, often taken from older literary texts, to create new semiotic possibilities. Although her work perhaps has more resonance with the Objectivists and the continuation of Black Mountain writers, Howe's work was also admired by the "Language" poets, and poems of hers appeared early on in Douglas Messerli's anthology "Language" Poetries (1987) and Ron Silliman's In the American Tree anthology (1986). Her work has also been included in other contexts in Messerli's From the Other Side of the Century: A New American Poetry 1960-1990 (1994) and Paul Hoover's Postmodern American Poetry (1994).

In 1990 Sun & Moon Press combined three earlier texts, Pythagorean Silence (1982), Defenestration of Prague (1983), and The Liberties (1983) together in The Europe of Trusts, one of the most beloved of Howe's publications.

Since the 1990s Howe has continued to produce exquisitely deconstructed historical and mythical texts in order to reveal hitherto unknown perspectives of the present and past.

Another one of Howe's most popular works has been her personal biographical study of the poet Emily Dickinson, My Emily Dickinson, first published in 1985, and reissued in 2007. She also wrote a book of critical studies, The Birth-mark: Unsettling the Wilderness in American Literary History (1993). Howe was a professor of literature at New York State University, Buffalo.

Howe's work has continued to be highly influential on American poetry and has drawn a wide range of readers. In 2011 she won the prestigious Bollingen Prize in American Poetry, and in 2008 she was the Anna-Maria Kellen Fellow at the American Academy in Berlin.

For a selection from The Blibliography of the King's Book, or Eikon Basilike, click below:
http://www.poetryfoundation.org/poem/172013

For a large selection of audio readings by Susan Howe, click here to reach PennSound:
http://writing.upenn.edu/pennsound/x/Howe.php
Posted by greenintegerblog at 9:52 AM