Mark Wallace (USA)
1962
Mark Wallace was born in 1962 in Princeton, New Jersey and grew up in the Washington, D.C. area.           Between the ages of 8 and 17, with his father and brother he drove across the United States to Southern California on camping trips every summer, once going by way of Mexico City and once by way of Lake Banff, and he has spent time in all 48 of US mainland states.
The numerous bad jobs he has worked since the age of 15 are distinguished not by working class physical labor but by the low paid tedium of the contemporary world’s bureaucratic nightmare. 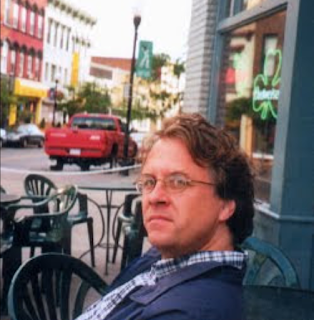 He received his Ph.D. from the State University at Buffalo with his dissertation The Gothic Universe in the Fiction of Paul Bowles and William Burroughs. He worked at Buffalo as a student assistant to Charles Bernstein on "The Wednesdays At Four Plus" reading series.
Since 1995 he has been running literary events, first in Washington, D.C., where he lived until 2005, and most recently at California State University San Marcos, where he currently teaches.
He is the author of three books of fiction, four books of poetry, a mixed genre work, and numerous chapbooks. Temporary Worker Rides A Subway won the 2002 Gertrude Stein Poetry Award and was published by Green Integer. His most recent fictions include Walking Dreams: Selected Early Tales and The Quarry and The Lot (both BlazeVox Books).
Wallace has been a contributing co-editor to several literary magazines, Poetic Briefs, Situation, and Submodern Fiction. His critical articles and reviews have appeared in numerous publications, and he has co-edited two essay collections, Telling It Slant: Avant Garde Poetics of the 1990s, and A Poetics of Criticism.
Much of his work involves questioning and undermining conventional distinctions between literary genres. The dynamics of terror and fear have remained central to most of it, as has the sense that much of what passes for literary and cultural knowledge is really just unexamined prejudice.
BOOKS OF POETRY
Three Rengas [with Joseph Battaglia and Keith Eckert] (Binghamton, New York: Triangle Press, 1988); Renga By Mail [with Joseph Battaglia and Keith Eckert] (Binghamton, New York: Triangle Press, 1989); The Cold and the Simple, A Blues (Binghamton, New York: Triangle Press, 1989); Shapes [with Joseph Battaglia and Keith Eckert] (Binghamton, New York: Triangle Press, 1990); By These Tokens (Binghamton, New York: Triangle Press, 1990); Complications from Standing in a Circle (Buffalo, New York: Leave Books, 1993); The Sponge Has Holes (Buffalo: New York: Tailspin Press, 1994); Every Day Is Most of My Time (Norman, Oklahoma: Texture Press, 1994); The Lawless Man (Los Angeles: Upper Limit Music, 1996); Building from White Buildings (Elmwood, Connecticut: Abacus, 1996); Sonnets of a Penny-A-Liner (Washington, DC: Buck Downs Books, 1996); In Case of Damage to Life, Limb, or This Elevator (Morris, Minnesota: Standing Stones Press, 1996); The Haunted Baronet (Washington, DC: Primitive Publications, 1996); Nothing Happened, and Besides I Wasn't There (Washington, DC: Edge Books, 1997); My Christmas Poem (New York: Poetry New York, 1998); Refiguring Foil (Elmwood, Connecticut: Abacus, 1998); Haze: Essays, Poems, Prose (Washington, DC: Edge Books, 2004); Temporary Worker Rides a Subway (Los Angeles: Green Integer, 2004); Felonies of Illusion (Washington, DC: Edge Books, 2008)

from Temporary Worker Rides a Subway

The basic act is for any

we wouldn't have never been

nor if or couldn't been, bend bare

distribute if one as if one, court of out,

if ever as to ever to, and too,

the man you took you took to be me

simply put the sale was fantastic

third show from the left, no sun from a stone,

against as putt if any pull, paradise pander

prospect of making you sick

won't have grenades in my garden

mean no say when saying no, reference

if he didn't stinky cheese, recall

I loves what not in such or when,

For PennSound's selection of readings and videos of Mark Wallace, hit below: http://writing.upenn.edu/pennsound/x/Wallace-Mark.php
For a conversation with Mark Wallace, click here: http://kaurab.tripod.com/poetry_peripherals/mark_wallace.html
Posted by Douglas Messerli at 8:14 AM