Born in Montevideo, Uruguay in 1886, Delmira Agustini became one of the most noted poets of Uruguay and spokesperson in Latin American letters for the energy of female consciousness. Combining traditional Spanish metrics with works that include carnal and religious elements similar to those used by the great Spanish mystic writer, Sor Juana Inés de la Cruz, Agustini used her work as a vehicle for spiritual transcendence.

She began to publish poems already in her early youth, writing a society column under the pseudonym of Joujou. She soon attracted the attentions of some of the cultural intellectuals, but they were perhaps more drawn to her beauty and youth than to her poetry, something which would haunt Agustini throughout her life.

In 1907 she published her first book of poetry, El libro blanco, which was well received by writers and critics. Three years later she published Cantos de la Mañana, which closed with the reviews of her previous book, many of which consisted of metaphors of the day suggesting the author's virginity and inspiration, terms which Agustini herself did not disavow. 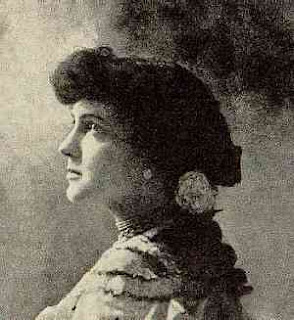 Within this fetishistic atmosphere the poet came to be called "la Nena," the baby, and was represented in the public mind as living in a private sphere of restrictive society while writing what some critics described as "sexually obsessed" and "heated" lyrics.

In 1913 she was working on two new collections of poetry, Los cálices vacíos (The Empty Chalices) and El rosario de Eros (Rosary of Eros)—collections which she considered her most mature to date—when she married Enrique Job Reyes. Within a month, Agustini left him, returning to her parents' home.

In July of 1914, Reyes discovered her in a clandestine sexual encounter, and shot her in a downtown Montevideo hotel room, killing her before he himself committed suicide.

Influenced by both Nietzsche and the Uruguayan poet Julio Herrera y Reissig, Agustini wrote a poetry of both elegance and sexual bravery, drawing a wide range of admirers including Rubén Darío, who advocated her work.

And at your almighty hands I ask

for his prodigal body arrayed in fire

covering mine, pale among petals of damask!

Today the electric corolla I unfurl

offers the attar of a garden of Wives;

for his vultures in my flesh, their fee,

I give up a whole cote of pint doves.

Give my feverish stem to the twinned cruel serpent

of his embrace...Absinthe and honey spent

in me for his utter veins and from his mouth...

I am one ardent furrow stretched

where the seed of another race will flourish

feeding madness and beauty both!

—Translated from the Spanish by Karl Kirchwey

Provision a ship for me like a great idea...

Some will call her The Shadow; others, The Star.

She need not lie at the mercy of hand or cat's paw;

I want her conscious, untameable and fair!

What will drive her is the rhythm of a bloodstained heart

of superhuman Life; in her I will feel strong

as if in the arms of God. Whatever seas and what-

ever quarter the wind her prow ill temper with a cinder's sparkling.

I will freight her with all of my sadness, and without a fix

across the liquid horizon of the sea...

what deep soundings or things unimagined

will we hear?... Already living and dreaming make me die...

—Translated from the Spanish by Karl Kirchwey

Posted by Douglas Messerli at 1:44 AM