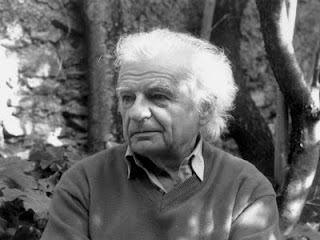 One of the important French poets of post-World War II, Yves Bonnefoy was born in Tours in 1923. He studied mathematics and philosophy at the University of Poitiers and the Sorbonne in Paris.
After World War II, Bonnefoy made his way to the US and locations in Europe studying art history. Returning to Paris, he briefly was connected with the Surrealists, evidenced in his first published book, Traité du pianiste of 1946.
He came to his own style in his 1953 book Du mouvement et de l'immobilité de Douve which also brought him public attention. From here on Bonnefoy's poetry would be often abstract, but his themes are close Romanticism. Arguing that poetry is not just a linguistic construction, Bonnefoy has sought in his work to go beyond form to create what he sees as a unity of mind and soul which overpowers even death.
In the late 1960s, Bonnefoy joined with André du Bouchet, Gaëtan Picon, and Louis-René des Forêts, founding the journal of literature and art, L'éphemère. Although Bonnefoy continues to write poetry, he has written an even greater number of books of essays and theory. In 1962-1964 he taught at Brandeis University in Massachusetts and, at the end of that decade at Centre Universitaire in Vincennes. Throughout the 1970s Bonnefoy taught at numerous universities, including Johns Hopkins University, Princeton, Yale, the University of Geneva, the University of Nice, the University of Provence, and the Graduate School of City University of New York.
With the death of Roland Barthes in 1981, Bonnefoy was awarded a chair of the comparative study of poetry at the the Collège de France.
In 1987 Bonnefoy was awarded the Prix Goncourt. He has also received the Prix des Critiques, the Balzan Prize for art history and criticism, the Prix mondial Cino Del Duca, and the Franz Kafka Prize.
He died on July 1, 2016.

Threats of the Witness

What did you want to set up on this table
If not the double fire of our death?
Frightened, I destroyed in this world
The red, bare table where the dead wind speaks.

Then I grew older. Outside, the truth of words
And the truth of wind have ceased their fight.
The fire has drawn away which was my church,
I am no longer even frightened. I do not sleep.

See, all the paths you went along are closed now,
No longer are you granted even the respite
To wander even lost. Earth, failing, sounds
With your footsteps which are going nowhere.

Why did you allow brambles to cover
That high silence you'd arrive at? The fire,
Empty, watches over memory's garden
And you, shadow in the shade, where are you, who are you?

You no longer come into this garden,
The paths of suffering and aloneness vanish,
The grasses intimate your face of death.

It does not matter to you any more
That stone conceals the dark church, and that trees
Conceal the dazzled face of a redder sun,

For you it is enough
To take a long time dying as in sleep,
And now you do not even love
The shadow you will wed.

Despite these stars you are alone now,
The center is far from you and near you,
You walked, you can walk, nothing changes now,
Always this same night which will never end.

See, you're separated from yourself now,
Always this same cry, but you do not hear it,
Are you dying, you who have no anguish now,
Are you even lost, you who seek after nothing?

The wind dies down, lord of the ancient sorrows,
Shall I be the last to wake up arms for the dead?
Now the fire stirs only memory and ash,
Sound of a dead face, sound of a folded wing.

Do you consent to love only the iron of gray water
When the angel of your night closes the harbor
And loses in the still water of the harbor
Night's last glimmers caught to his dead wing?

Only suffer through the harshness of my words
And I shall conquer sleep and death for you,
For you I'll summon in the breaking tree
The flame that will be both your ship and harbor.

And raise the fire which has no place, no time
Wind seeking fire, the summits of dead wood,
The horizon of a voice where stars are falling,
Moon merging with the chaos of the dead.

—Translated from the French by Anthony Rudolf


Imperfection Is the Summit

You had to
Ruin the naked face that rises in the marble,
Hammer at every beauty every form,

Love perfection because it is the threshold
But deny it once known, once dead forget it,

Imperfect is the summit.

—Translated from the French by Anthony Rudolf

Hear me live again in these forests
Under the foliage of memory
Where I pass green,
Charred smile of old plants on earth,
Charcoal race of day.

Hear me live again, I bring you
To the garden of presence,
The abandoned at night and covered with shadows
The place for you in your new love.

Yesterday the desert reigned, I was a wild leaf
And free to die,
But time ripened, black cry of the valleys,
The wound of water in the stones of the day.

—Translated from the French by Serge Gavronsky

The Art of Poetry

The eyes were dragged up out of this night.
The hands immobilized and dried.
The fever reconciled. The heart has been told
To be the heart. The demon that lived in these veins
Has fled howling.
The dismal, blood-stained voice in this mouth
Has been washed and recalled.

—Translated from the French by Richard Pevear
(Pierre écrite, 1965)

We have come back to our origin.
The place where all had been evident, now torn.
The windows mingled too many lights,
The stairs climbed too many stars
Which are collapsing arches, rubble;
The fire seemed to burn in another world.

And now birds fly from room to room,
The shutters have come down, the bed is covered with stones,
The fireplace full of the sky's dying debris.
It was here that we would talk at evening, almost in whispers,
Because of the echoing from the vaulted ceiling, here that
We could make our plans: but a boat,
Loaded with red stones, moved away,
Irresistibly, from a shore, and oblivion
Was already placing its ashes on the dreams
That we endlessly renewed, peopling with images
The fire that burned until the last morning.

Yes, I think so, I want to think so, but who are
These shades that are carrying off the mirror?
And look, brambles are springing up among the stones
Along the barely beaten path through the grasses
That took us toward the young trees.
It seems to me today, here, that speech
Is that half-broken trough flowing
At every rainy dawn with useless water.

The grass, and in the grass the water shimmering,
Like a river.
The work of mending in this world never ends.
Paradise lies scattered, this I know,
It is our earthly task to recognize
Its flowers that are strewn in the humble grass;
But the angel has disappeared, a light
That suddenly was but a setting sun.

And like Adam and Eve we will talk
One last time in the garden.
Like Adam the first regret, like Eve the first
Courage, we will want and not want
To pass through the low, half-opened door
Down there, at the other end of the field, colored
As though prophetically with a last ray of light.
Will the future spring from the origin
As the sky gives itself to a convex mirror?
From the light which has been the miracle
Of here and now, will we gather up
In darker hands the seeds for other pools of water
Hidden in other fields "among other stones?"

Surely the place of victory, of victory over ourselves,
Is here in what we are leaving tonight. Endless here
Like the water overflowing from the trough.

—Translated from the French by John Naughton

"The Farewell"
English language translation copyright ©1991 by John Naughton. Reprinted from In the Shadow's Light, trans. by John Naughton (Chicago: University of Chicago Press, 1991)
Posted by Douglas Messerli at 2:31 AM