Born to Irish parents in Lincolnshire, England on July 20th, 1951, Maggie O'Sullivan worked continuously for BBC-TV from 1973 to 1988, as a production assistant/researcher on arts documentary films.

In 1988 she moved to the Pennines outside of Hebden Bridge in West Yorkshire, running a celebrated "Writing in Action" series for adults, with classes held in Hebden Bridge. She also held many residences in a range of educational institutions, tutoring in creative writing and poetry for Open College of the Arts. 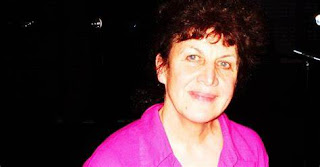 Her work has been highly influenced by the performances and poetry of Kurt Schwitters, Joseph Beuys, Bob Cobbing, Jerome Rothenberg, and Basil Bunting. Her first book, An Incomplete Natural History was published in 1984, with the renowned book, House of Shaman following in 1993. Other books include Red Shift (2000) and Palace of Reptiles (2003).

In 1996 O'Sullivan edited the noted anthology out of everywhere: an anthology of contemporary linguistically innovative poetry by women in North American & the UK.

For over 30 years she has performed her work, often collaborating with dancers and musicians, participating in major international festivals and conferences in the US, Canada, Europe, Ireland, and Britain.

O'Sullivan is general considered one of the most innovative of contemporary British authors.

press below for the link

Press below for link to a video of Maggie O'Sullivan reading:

Posted by Douglas Messerli at 2:13 AM