The great US composer and lyricist Irving Berlin was born Israel Isidore Baline on May 11, 1888, the son of Moses and Lipkin Baline. It is uncertain in which town he was born, but it appears he was born in a village near Mogilyov, Russia (now Belarus). His father was a cantor in the local synagogue. Like many Jewish families of the period, they were forced to flee, winding up in 1893 in New York City. Berlin's only memory of his five years in Russia was that "he was lying on a blanket by the side of a road, watching his house burn to the ground."

The family eventually settled in a Cherry Street cold-water basement flat on the Lower East Side. Unable to find work as a cantor, his father took a job at a Kosher meat market, giving Hebrew lessons on the side. The father died when his son was eight, and the boy was forced to find work as a newspaper boy to help support his family.

In order to work, Izzy had to quit school, virtually living on the streets. But the music he heard at the salons and bars drew him into song. Occasionally singing on the streets, people threw him coins, and he realized a new ambition of becoming a singing waiter.

At the age of 14, however, he realized that he was bringing in less money than any of his sisters, and he escaped home, turning to the Dickensian-like charitable institutions which had sprung up along the Bowery for the hundreds of young boys like himself.

With few marketable skills and even less experience, he had no choice but to seek his vocation of singing. Joining with a few of his friends, they nightly entered the saloons, singing for a few pennies the drinkers pitched them. He also began plugging songs at Tony Pastor's Music Hall, and, in 1906 began working as a singing waiter at the Pelham Cafe in Chinatown, singing parodies of "blues" songs to the delighted customers. It was there that he taught himself how to play the piano and began composing songs, beginning with "Marie from Sunny Italy," with the Pelham's regular pianist, Mike Nicholson. The sheet music for that piece published his name as I. Berlin, the name the boy adopted.

One evening, he performed a number of hits by another boy composer, George M. Cohan, singing to great applause "Yankee Doodle Boy," to which the saloon's Irish owner declared: "You know what you are, my boy? You're the Yiddishe Yankee Doodle!" 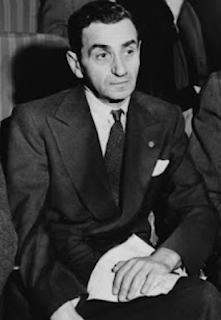 His local fame grew, and by 1909 found a job as a staff lyricist with the Ted Snyder Company. Within two years, Berlin's career would take a "meteoric rise" with the publication of "Alexander's Rag Time Band," more a march than a rag, and incorporating the bugle call from "Swanee River." But the tune, reviving the ragtime excitement of Scott Joplin, made Berlin a star. The song has been sung by nearly every great interpreter from Bessie Smith, Louis Armstrong, Bing Crosby, and Al Jolson to Johnny Mercer and Ray Charles.

The song was not a hit when it first appeared in Jesse Lasky's "Follies" show, but later that year, appearing in another Broadway review that sparked attention and led to a new dance craze. Famed dancers Irene and Verson Castle sought out Berlin to write a ragtime revue from them, "Watch Your Step," which became an immediate hit, Variety describing it as "the first syncopated musical," bringing wide attention to Berlin's writing.

In the many years following, Berlin would compose hit after hit, giving music and lyrics to numerous Broadway shows and films, the likes Blue Skies, Holiday Inn, Easter Parade, and White Christmas. During World I and II, Berlin wrote patriotic songs for the American public, and throughout his career creating fabulous hit songs the likes of "Soft Lights and Sweet Music," "Cheek to Cheek,""Always," "Puttin' on the Ritz," "Say It Isn't So," and hundreds of others.

The songs I have selected below are, for copyright reasons, chosen only from his early years, but they reflect the wide range of the high and low cultural values in his work, with several numbers revealing the assimilative issues of a culture of immigrants, redefining itself within the larger whole. And, of course, I have attempted to select the most original and poetic of these early titles.

I have also provided links with several versions of each song when available.

Yiddle on Your Fiddle (Play Some Ragtime)

At a wedding yesterday

Yiddle on his fiddle played some ragtime

And when Sadie heard him play

She jumped up and looked him in the eyes

Yiddle swelled his chest 'way out

Ev'ryone was taken by surprise

When they heard Sadie shout

Yiddle in the middle of your fiddle, play some ragtime

Mine choc'late baby, if you'll maybe play for Sadie

Yiddle, don't you stop, if you do, I'll drop

For I just can't make my eyes shut up

Yiddle on your fiddle, play some ragtime

At the supper table Sadie thought

Yiddle must have flew the coop

She looked all around, but could not find him

'Till she heard him drinking soup

Sadie waited till they served the fish

Then she jumped upon the floor

And yelled to him once more

To become an actress lady

On the stage she soon became the rage

As the only real Salomy baby

When she came to town, her sweetheart Mose

Brought for her around a pretty rose

But he got an awful fright

When his Sadie came to sight

He stood up and yelled with all his might:

Don't do that dance, I tell you Sadie

That's not a bus'ness for a lady!

That I'm your loving Mose

Where is your clothes?

You better go and get your dresses

Oy! such a sad disgrace

No one looks in your face

From the crowd Moses yelled out loud,

"Who put in your head such notions?

You look sweet but jiggle with your feet

Who put in your back such funny motions?

As a singer you was always fine!

Sing to me, 'Because the world is mine!'

"Then the crowd began to roar

Sadie did a new encore

Mose got mad and yelled at her once more

After You Get What You Want You Don't Want It

Listen to me, honey dear

Something's wrong with you I fear

It's getting harder to please you

Harder and harder each year

I don't want to make you blue

But you need a talking to

Here's what's wrong with you

After you get what you want, you don't want it

If I gave you the moon, you'd grow tired of it soon

But after you are presented

With what you want, you're discontented

You're always wishing and wanting for something

When you get what you want

You don't want what you get

And tho' I sit upon your knee

You'll grow tired of me'

Cause after you get what you want

You don't want what you wanted at all

Don't you say that I'm unkind

Think it over and you'll find

You've got a changeable nature

You're always changing your mind

There's a longing in your eye

That is hard to satisfy

You're unhappy most of the time

Here's the reason why

And tho' you sit upon my knee

For a performance of this by singers Gus Van and Joe Schenk in 1920, click below:

For Marilyn Monroe's rendition of the song, performed in There's No Business Like Show Business, click below:

So nat-u-ral that you want to go to war

That's just the best-est band what am, ma hon-ey lamb

Come and listen to the wonderful sound, hear the music that is sweapin, the town,

I love to her that banjo strimmin eith to that bar, ragtime music is the greatest by far,

so come and see, you'll soon agree they are best in the land.

Come on lets give em a hand

So nat-u-ral that you want to go to war

For an early version by Collins and Harlan, click here:

Soon the doctor came around and said

"No use crying, the man is dying. He can't live very long!"

"Send my son here to my side," they heard the old man say

"I've got something to tell him before I pass away"

Soon his son was sitting by his bed

The old man said, "My son, before my days are done

I want you to know:

And it's up to you to see that Cohen pays

I sold a lot of goods to Rosenstein and Sons

On an I.O.U. for ninety days

Levi brothers don't get any credit

They owe me for one hundred yards of lace

If you promise me, my son, you'll collect from ev'ry one

I can die with a smile on my face"

Such a change you never saw, he's got such rosy cheeks

Ev'ryone who knew that he was sick

Couldn't tell how he got well so quick

They went and asked him to explain how he pulled through

And my son went out and made poor Cohen pay

A bill was owed to me by Rosenstein and Sons

And they settled on that very day

What could my son do with all that money

If I should leave it all and say goodbye?

It's all right to pass away, but when people start to pay

That's no time for a bus'nessman to die

For a wonderful performance of this song Janet Klein, with a Yiddish accent, click below:

For the 1940 version played on Victrola with Jack Ryan and orchestra, click below:

They Were All Out Of Step But Jim

In his un-i-form and with his gun,

What a love-ly pic-ture he made.

She came home that ev-'ning,

Filled up with de-light;

And to all the neigh-bors,

"Did you see my lit-tle Jim-my march-ing,

There was Jim-my just as stiff as starch,

Cast-ing their eyes on him?

To live in a tent;

O-ver in France with his reg-i-ment.

Were you there, and tell me, did you no-tice?

They were all out of step but Jim."

Buy-ing the drinks for the crowd;

You could tell that he was feel-ing good,

When his glass was emp-ty,

He would treat a-gain and cry:

"Did you see my lit-tle Jim-my march-ing,

There was Jim-my just as stiff as starch,

Cast-ing their eyes on him?

It made me glad, To gaze at the lad;

Lord help the Kai- ser if he's like his Dad.

Were you there, and tell me, did you no-tice?

They were all out of step but Jim."

Oh! How I Hate To Get Up In The Morning

The oth-er day I chanced to meet a sol-dier friend of mine,

He'd been in camp for sev-'ral weeks and he was look-ing fine;

I asked him how he liked the life, and this is what he said:

For the hard-est blow of all, is to hear the bu-gler call;

you've got to get up this morn-ing!

Some day they're go-ing to find him dead;

And spend the rest of my life in bed."

He wakes the boys at five and then goes back to bed a-gain;

If ev-'ry-thing goes well with me, I'll be a bu-gler soon.

For the hard-est blow of all, is to hear the bu-gler call;

you've got to get up this morn-ing!

Oh! boy the min-ute the foe is dead;

And spend the rest of my life in bed."

For a performance of the above song from the 1943 movie This Is the Army, click below

Posted by Douglas Messerli at 1:29 AM