One of the first things anyone approaching David Antin's marvelous new collection of essays on art and literature will notice is the striking image on the book's cover, a photograph that depicts David Antin, looking perhaps a bit more Buddha-like than he does in real-life, walking toward another image of himself, this from the back side of the face. There is something arresting about this image, even a bit eerie, but I made little of it when I first saw it, except to register that it represented an image of the author, symbolically speaking, of 1966 coming towards his current being. A few friends, however, found that image quite disturbing, one suggesting he had to keep the book face down on his coffee table. Perhaps it was just the oddity of having a photograph, which we associate with the real world, representing something that we know cannot truly happen, one aspect of the self meeting up with the other. 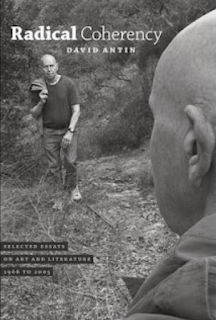 Yet, if we read on in Antin's book, particularly in his essay "The Beggar and the King," we recognize that this transaction between two aspects of the self is precisely what the author projects as being behind the narrative genre he has created in the "talk poem." Speaking of his early work, generated by a kind of collage sensibility, Antin observes:

...I started out in the 1950s like many young experimental artists

twentieth-century modernism, the most important of which for a

artist was the idea of the exhaustion, experimental and aesthetic, of

the representation in all its forms. For a language artist this mostly

meant the uselessness of narrative.

Antin goes on to suggest that over the years, as he recognized the exhaustion "of nearly all the modes of experimental communication," that he began to reexamine narrative, exploring worlds of folklorists and ethnographers (the Grimm brothers, Afansiev, etc.) as well as V. Propp's structural study The Morphology of the Folktale, and others as far-reaching as Zuni Tales and Bernardino de Sahagun's definitions compiled from survivors of the Aztec culture. What Antin finally determined is that some narratives are not stories, and some stories have no narrative, coming eventually to articulate a definition of narrative:

some particular subject position, which is what characterizes the stake.

It is this sense of stake that should be taken as the center of narrative.

The act of reconnecting subject positions across the gulf of

change is what constitutes the formation of self. All self is built

over the threat of change. There can be no self until there is an

awareness of one's subject position, which can only be created

by the threat of change or the memory of change. Every change

creates a fracture between successive subject states, that narrative

attempts and fails to heal. The self is formed over these cracks.

Every self is multiply fractured, and narrative traversal of these

fracture planes defines the self. Narrative is the traditional and

indispensable instrument of self creation.

It is this definition of narrative and Antin's own exploration of that genre in his "talk poems" that came eventually to define his art. One must understand the picture on the cover, accordingly, not just as an encounter of an older Antin with a newer one, but one kind of self facing the spectre of another and redefining that vision of self in the process. And in that sense, the image on the cover is a slightly disturbing vision of these two selves coming together almost to duke it out over the changes that have obviously occurred in the writer's own life, one might say, another kind of "radical coherency."

Yet I was struck in these revelatory essays, at how much continuity Antin demonstrates in a writing that bridges 39 years. There are only four works that actually fit the format of what the author describes as "talk poems" here ("the existential allegory of the rothko chapel," the title piece, "radical coherency," "the death of the hired man," and "john cage uncaged is still cagey," although Antin tells me that "Fine Furs" was originally written in the form, but later transformed into an essay), but I would argue that all of the pieces in this volume have the same Antin inflections of voice and structural patterns as his later works. Antin's is a voice filled with pauses, not always at the place one might suspect, but as in Stein, always there as part of the syntax itself. These caesuras are a product of Antin's whole process, which is so different from most critical writing that it is sometimes difficult to think of Antin setting out to write an "essay." For Antin does not "answer" anything, but poses of each artist, poet or groups of these, questions which he then ponders and pauses over in sentence after sentence, wandering and wondering aloud in astoundingly profound ways, how and why certain things are being said or done. Occasionally, for Antin is a true wit, these can be somewhat whimsical—in "Warhol: The Silver Tenement," for example, Antin's major summary is that in order for Warhol's beautiful creations to succeed, they must necessarily develop "scuffs," transforming his paintings, films, novels, soap operas, and even his planned "silver tenement" into a kind of "precisely pinpointed defectiveness," a kind of tawdry version of glamour—but by and large, no matter what his own position about the quality or purposefulness of the various art and poetic endeavors upon which he focuses, Antin asks serious questions, challenges set notions, and makes us rethink our assumptions. 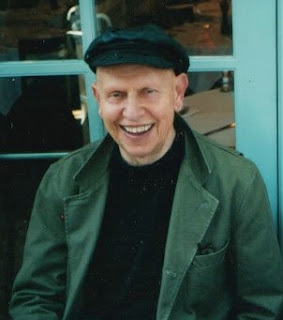 In order to cover a large range of territory, Antin has clearly winnowed down what was to have been a far bigger book with numerous other essays (sometimes on the same artist at different periods in his or her career) into a whole that explores various aspects of the art scene from the mid-1960s through today. From Pop art, Antin moves on to the new representational work of artists like Alex Katz, taking out time in a wonderfully, slightly daffy piece to consider the work of machine-builders such as Jean Tinguely, before turning his attention to a "Pollution Show" in Oakland, California, consisting of photographs, drawings, kinetic junk sculpture, funk, discreet piles of rubbish, and even a dead seagull.

From these "earthwork" pieces, the author turns his attention to different kinds and traditions of constructivism and the issues of flatness in contemporary art, moving through Sol Lewitt, Robert Irwin, Michael Asher, Carl Andre and others. This is followed by a bruising criticism of the famed "Art and Technology," show, organized by Maurice Tuchman at the Los Angeles County Museum of Art in 1971. Later essays include discussions of video art, an hilarious consideration—using the example of artist Robert Morris—of how one might comprehend the "proprietary rights" of an artist, followed by a sensitive evaluation of the color fields of Rothko's art in Houston's Rothko Chapel, often viewed under the light of clouded skies, and ending with a reevaluation of performance artist Allan Kaprow. In short, Antin's writing serves almost as a textbook, without textbook-like presentations and conclusions, of what art meant throughout the 1960s and 1970s.

I should add that not only can I hear Antin's voice in all these pieces but I perceive his various viewpoints as splendidly personal appreciations or disparagements. Reading Antin on art is as if one were accompanying a lively friend or uncle on trips to the museums and galleries throughout the country over a period of several years, the only way one can truly come to know and appreciate art.

Miraculously Antin does the same thing for literature, beginning with a substantial essay exploring issues of modernism and postmodernism in American poetry long before, 1972, anyone else had thoroughly considered these issues in depth. I remember sitting in Marjorie Perloff's class—Marjorie being one of Antin's first major critical supporters—four years later, where we still hadn't accepted the idea of there being a "postmodern" poetry. Antin was there first! His "Some Questions about Modernism" bravely explores, again long before it had been done by others, notions of different kinds of modernism, opening up all kinds of literary texts that move away from the Pound-Williams-Eliot-Stevens kind of poetic genealogy.

"Radical Coherency" humorously discusses the concept through a visit to a large shopping mall store where he attempts to help his elderly mother pick out some undergarments, priced at the amount she has been used to paying for years. That metaphor, of bargain shops within large clothing sections, striated by aisles and aisles of other ready-to-purchase goods, probably does more to explain what we might mean by a coherent thing that has radically exploded to contain all sorts of strange categories and subdivisions to meet the needs of contemporary culture.

Essays like "The Stranger at the Door," the already-discussed "The Beggar and the King," and "Fine Furs," open up the whole notion of what a poem is or might be understood to be. In one of the funniest works of the entire book, "the death of the hired hand," Antin deconstructs some of the poetry of Robert Frost (and incidentally, of my artist acquaintance, Siah Armajani's poetry room, in which Antin speaks). Antin's discussion of the kind of dishonesty—a "wearing of hats" as he terms it—of Frost's diction and poetic positioning will forever change, I can assure you, the way you see this plain carpenter of imitative New England poetic dialogues.

The penultimate essay is a brilliant reconsideration of Wittgenstein's work in the context of some critics' contention that his philosophical studies are also works of poetry. Antin dares to ask and attempts to explain just what that poetry might consist of, and how, sometimes rather strangely, it functions as such. In the last essay, "john cage uncaged is still cagey," Antin takes on work that has perhaps been very influential to his own writing, suggesting how the performances of this "cagey" composer, collector of mushrooms, and sometimes unofficial manager of Merce Cunningham's dance company, function as poetic events.

There are a few minor quibbles with Antin's book, namely concerning the lack of information the author provides about some of the artists and events on which writes. It would be useful to know the names and places of the shows he reviewed, in one case in particular, Antin, a close friend of the artist, does not ever mention Allan (Kaprow's) last name! It occurs only in a footnote. But these are small matters that might have been ameliorated by more editorial involvement.

The book as a whole is a stunning summary (although there are dozens of other works by Antin remaining to be republished) of one of our most engaging and challenging intellects. Radical Coherency is filled with the goods you can enjoy again and again.

Posted by Douglas Messerli at 2:21 AM