Middleton is one of most noted translations of German literature of the 20th and 21st centuries, having translated Robert Walser, Hugo von Hoffmannsthal, Christa Wolf, Paul Celan, Gottfried Benn, Elias Canetti, Günter Grass, Gert Hoffman, and numerous other major writers. He is also a noted poet and prose writer. 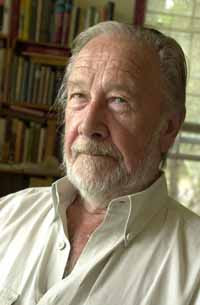 Middleton served in the Royal Air Force from 1944 to 1948, before attending Merton College in Oxford. After teaching English at the University of Zürich, be became Lecturer and afterwards, Senior Lecturer in German and King's College London (1955-1965).

The following year he was invited to be Professor of Germanic Language and Literature at the University of Texas in Austin, later becoming the David J. Bruton Centennial Professor of Modern Languages at Texas.

His first book, Torse 3: Poems 1944-1961 was published by Harcourt in 1962, for which he shared the Geoffrey Faber award. Thus followed numerous volumes of verbally exuberant poet texts, including Twenty Tropes for Doctor Dark and The Fossil Fish. His Collected Poems was published in England in 2002.

For an obituary of Christopher Middleton, go here:

Dry vine leaves burn in an angle of the wall.

Dry vine leaves and a sheet of paper, overhung

by the green vine.

From an open grate in an angle of the wall

into the green vine where grape clusters go

and a few dead flies on fire

and a Spanish toffee spat

into an angle of the wall

make a smell that calls to mind

Spanish toffee sizzles and the smell

has soon gone over the wall.

A naked child jumps over the threshold,

waving a green spry of leaves of vine.

Useful these bowls may be;

what fatness makes the hollows glow,

their shadows bossed and plump.

Precisely these a wheel whirling backward

flattens them. Knuckles whiten on copper:

Cup and teapot may be such comforters:

over the bad blood between us once.

When baking began, the air in jugs frothed

for milk, or lupins. Now mob is crushed

by mob, what fatness but in wild places,

where some half dozen dusty mindful men

drinking from gourd or canvas huddle,

and can speak at last of the good rain.

The door a maze

as it is pushed open—

at a ladder shook

free the tarantula, it slid

black and fizzing to a rung

into the fur belly—

out there, they keep growing

by their weight over

our caves, I hear them.

Bothering us for a long time,

This laundry woman: Beneath

A blue segment of sky she is

All brown and profiled against

A cliff so laboriously hewn

That it resembles a rampart.

And greys to streak her bodice,

But yellow or brown the rampart

Towers behind the woman, as if

Her combed hair clings to the head

Surely now she has to be hurrying

Runs at her left side, one foot

Lifting off the shadowy ground,

Mimics her mother, and the labour

Extracted from the mother, that

She will inherit too. Still,

Goya’s glimpse of them has put

Are they running to the fountain

Or to the river at all? Are they

Running away from something

Must have to do with bread. Yet

Won’t they have had to scoot,

In those times, across the picture,

Basket on the mother’s haunch

Bumping up and down on it, because

Shirts coiled in the wickerwork

White, the profile of a billygoat)

Had been stiff with blood, or wet?

The next up for execution

Needed snowy linen, so the French

Bullets could be met with decent

Some villagers in bleached

To die, if only, in Bordeaux,

Candle-crowned for half the night,

Imagining, him, in grief and detail,

Horrors he had likely never seen.

Of him or her who placed it there, and why

No one knew anything. —Thomas Hardy

Judge Roy Bean of Long Ago

Beheld once in a magazine

The face of Lily Langtry,

And in the twilight often

Judge Bean upon his porch

Rocked in a rocking chair,

Upon his porch he’d rock

And dream and dream of her.

A distant blue, how it pulls

The flesh to Long Ago

And far away, although

Passing through, and sing to him.

Not far from where the judge

Had sat and rocked and hoped

There was a tree festooned

With bottles that were blue.

Over the tips of many twigs

Somebody had been slotting

His empties, by the dozen.

Well-water there is hard;

Deep canyons through the rock

The Rio Grande, a trickle now,

Had had long since to carve.

There too the mountains host

Yet not a one would choose

To nest in such a tree.

The tree, so dead its twigs

That pronged the bottles, have

They in the meantime broke?

A striking sight against the sky,

An image not to be forgot,

So many bottles of blue glass

And sips of milk drunk up,

It still explodes to mark

Dimensions in the mind,

A horizon in the heart.

Long before the twigs had pronged

Blue bottles for my sight,

No name at all, that place

Nothing airy in his mind,

Not despairing of his dream,

One stormy day he took his pen

Now Langtry is its name

When he had pulled upright his jingle-jangle cart,

he said he hoped he would not be disturbing me.

He unpacked his kit from the cart and lost no time

but baited his lines with worms from a box of dirt

and made a long cast for the lead to plop in mid-river.

no Spanish, he explains that he took himself soon

to school, learning the way they speak it in Spain.

When he was little his father died, says he.

So he helped in the house, cleaning and sweeping,

When he had a family of his own, two boys

and a girl, he told them, one by one, as they grew,

there’ll be no lazy nobodies in my house,

told them when it was time to grow up

and that it won’t be easy but here’s your support,

grow up to be somebody with an education:

Now there’s my boy in the marines (this war, it makes

no sense) but then his line is aviation, the mechanics,

in law-school the girl, the other boy in medicine,

and all three speak Spanish as well as they do English.

When he’s et to make a cast with this third rod,

but his own uncle’s was cheaper for he was cremated.

And when he has cast with a fourth rod far out

into mid-river, he says that he’ll be tonight

in Marble Falls where the catfish bite better,

that because of the funeral he has a week off.

But when he went to Mexico he didn’t like it,

says he, they look down on us, call me a gringo.

Me, I’m a carpenter, he says, I can build you

a pretty house, restore, where wood has gone to rot,

anything to do with wood, I can do it with finish,

fishing is just a pastime when you’re needing it,

and it has clouded over now, the fish like that.

Yes, he says, any kind of wood, I can handle it,

and we were standing under a water-cypress,

a very tall tree that has gone brown by March,

the tangle of its roots ran in long looped

cylinders out under water, while he talked.

wearing a cobalt gimme cap with NY in a monogram,

an olive-green tabard (pockets in place of emblems),

yet all I had asked was if he knew perhaps

a meaning of felo de se, supposing it Spanish.

Not theft, he said, thieving is robar, robo;

what you said, might that be in a book?

Posted by Douglas Messerli at 2:03 AM