One of the founding members of the Graz Author's Collective, Andreas Okopenko was born in Košice (Kaschau) in what then called Czechoslovakia on March 15, 1930. His father was a Ukrainian physician and his mother was an Austrian. Beginning in 1939 the family moved to Vienna where Okopenko was trained as a chemist and began to write poetry. 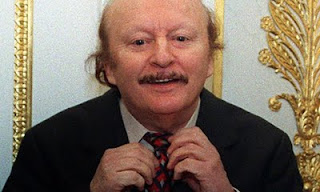 Before long the young poet became a central figure of non-establishment writers who were to become known as the Vienna Group. His first poems appeared in 1949 in the literary magazine Neue Wege.

Okopenko's Grüner November (Green November) appeared in 1957, followed by Seltsame Tage (Strange Days) in 1963. In 1969 he published his popular Warum sind die Latrinen so traurig? Spleengesang (Why are latrines so sad? Spleen-song).

Obopenko also wrote fiction, penning the experimental fiction Lexikon einer sentimentale Reise zum Exporteurtreffen in Druden (Dictionary of a sentimental journey to a meeting of expert officers in Druden) in 1970, offering readers a new alphabetic arrangement of meaning. In Der Akazienfresser (The aracia eater) of 1973, Okopenko proposed a new punctuation mark to express boredom. In 1974 he published a collection of fantastic tales, Warnung für Ypsilon (Warning for Upsilon) and a play. Another fiction, Meteoriten, was published in 1977, followed by Vier Ausfsätze (Four compositions) in 1977. His Collected Poems appeared in 1980 and a new collection Affenzucker / Neue Lockergedicte appeared in 1999. His short narrative, Child Nazi, was published in English.

Okopenko won the Grand Austrian State Prize for Literature in 2002 and the Georg Trakl Prize.

From 1999 until the year of his death, Okopenko was a member of the Austrian art senate.

I green in the meadow of the young village

My farm is yellow with girl with grain

My girl is yellow with farm with grain

I green in the grain of the young village

The sun is on the way to market

My girl is on the way to market

My green young village girl is on the way to market

The marketplaces are with pumpkins

The pumpkins are white dust of the marketplaces

The white dust of the noonday marketplaces

I green the afternoon in the girl garden

I am greening in the girl garden now

A noonday jug a blue glass a water

A younger sister who goes away and leaves us alone

My girl in the cool room apart

The girl and the water I drink the water

The jug is the room it takes us both

An ant crawls across the Latin grammar

A leaf has come in through the window

A drop of water has run across my mouth

A slow small clock makes the afternoon of aluminum

I have buried my clock in earth in the flowerpot

My girl is not the beetle that runs across the wood

My girl lies in her summer dress on the window sill

I know that Pythagoras is important and Aristides and Caesar

I am in revolt against the hidebound school

The blackboard the rune the school physician the chalk being dry

The duster being damp the sandwich paper being brown

The water the blue mirror the sunburn the railway

The farmdog the yellow one, the little pups the furballs

The red bow of the cat, the mouse in the trap with the bacon

I am the holidays I am the green

I green on the meadow in the grain

I blue in the room of the girl

In the afternoon, I blue in the girl

Somewhere I sat tanning in the sun

And watched an insect come out of the bushes.

I heard someone call a beloved name

And went in the direction of the call.

Somewhere—that was at age fourteen.

they come from the ground

To see a hilarious short clip of "The Worried Men Skiffle Group" in German, click below:

Posted by Douglas Messerli at 1:52 AM