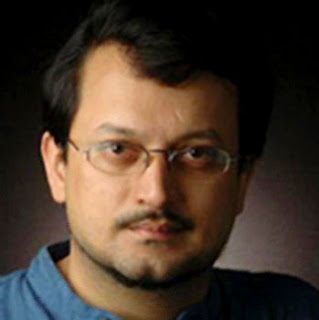 Born in Mumbai, India on March 29, 2969, Ranjit Hoskoté has become recognized as one of the most significant younger Indian poets writing in English.

From 1988 to 1999 Hoskoté was the principal art critic for The Times of India, also writing a weekly column of cultural commentary, "Ripple Effects." Later, in his role as religion and philosophy editor of that paper, he began a column titled "The Speaking Tree," devoted to spiritual and religious philosophical issues. He also wrote critical biographies and monographs on a number of India painters and artists over the years.

Hoskoté's first book of poetry Zones of Assault was published in 1991, with his second book, The Cartographer's Apprentice, following several years later in 2000. Since then he has published two further books of poetry, The Sleepwalker's Archive (2001) and Vanishing Acts: New and Selected Poems 1985-2005 (2006). He also translated the poetry of Vasant Abaji Dahake and other books. He edited the important anthology of Indian poetry, Reasons for Belonging: Fourteen Contemporary India Poets (2002). He has recently published a translation of the Kashmiri saint-poet Lal Ded.

The poet has also been highly involved in PEN All-India and in International PEN, serving since 1986 as its General Secretary, as well as the editor of its journal Penumbra. He was President of Poetry Circle Bombay from 1992-1997.

Hoskoté was a Visiting Writer and Fellow of the International Writing Program at the University of Iowa in 1995, and served as writer-in-residence at the Villa Waldbrta in Munich in 2003. In 1996 he was awarded the Sanskriti Award for Literature and he won First Prize in the British Council/Poetry Society All-India Poetry Competition in 1997. India's National Academy of Letters honored him with its Sahitya Akademi Golden Jubilee Award in 2004.

A thought that has died inside him leaks out
as a stag streaking across a page, its horns
skewed by the grain, and the nymph
he cannot catch by sight alone is dressed
in night's sparkling haze and he must lunge
at her hair, her breasts, her thighs with graphite
stabs, his hands breaking into antlers,
his mouth a snout rooting in the black earth
for scents his mind has lost on the trek
to the scribe's carrel, and now the margin of thought
is red again with the ribs of the roasted stag and washed
with the mixed gold and blood in which he's drawn
the nymph on a chair, who watches him twist and fall,
shake himself free from his tangled, muddy pelt:
comet-maned, meteor-eyes, through belling with wolf-howl.


Portrait of an Unknown Master

You've come to the coldest place:
rust peeling from tall trees
to settle in a fine powder on ice
that was river, bridge, mirrored cloud.

Stark paper, fine powder rubbed in its grain.
The face is red chalk-dust
under the detective's fingernail.
Who were you?

What shall I do with your silences,
master? Your grey eyes glowing
in a wall of sour cement,
the darkness in your blood,
your arsonist's handshake?

Shall I hold the girl running a hoop through the square,
grip the lighthouse looming at the end of the street?
Seize the shadow of the man puffing a pipe
as it lengthens on a hot brick wall?
Grasp the ivy that crusts on cool, high windows?

The water is crumpling in your hands.
Too much leaks into the world, you think,
too much. You are coming apart at the seams,
your buttons are going off like gunshots.
let it spill, master, you cannot hold back

the goldfish exploding from your shirtfront.

Here's how you solve the riddles
that this train station poses
when you come in from the sun,
wristwatch stopped, looking for shade
under cool timetables.

Start by walking around. Stare at a pyramid
that you cannot enter. Look through an igloo
that's made of glass and numbers. Then test
the runway laid out for a plane too heavy
with excess baggage to take off.
It taxies around a circle of broken stones.

Or try the ramp that leads to a library
of lead books, their pages stapled down
and a strong lens provided
to blur the missing author's words.
Someone's marked their favorite passages
with dead seeds.

You're shrugging on your coat,
hefting your rucksack.
But where's the rush, my friend?
Have a cappuccino while you wait.
You can take your time at this station.

No train stops here, no train ever leaves.

The Empire of Lights
after Magritte

This house has not moved a brick since midnight.
Outside the front door, the streetlamp has brushed
the cobblestones with a moss of delay: the night
glows in a yawn between darkness and day.

The street flows on, soaking the canal
with brittle afterimages of rain.
The bats that have chased butterflies of meaning
up the crescendos of trees all night

are drowsing in their green and icy silhouettes.
It is night here still, it will always be night:
this street is wound up tight to strike
at 3 am and hiss a breath of doubt

into waxy clouds that are talking, softly,
about the ninja maestro who bled the clock dry.
They remember the day he parted the curtains
and broke the windows in his flame-coloured hands.

They are whispering about the jacarandas
that he drowned in the sky beneath the house
that has not moved a brick since midnight,
and how well cotton burns at noon.

The grass is always greener in glass houses.
People on the other side shouldn't throw stones.
Let him who is without sin make hay.
Cast the first stone while the sun shines.

Put your money on the bolted horse.
Lock the stable door where your mouth is.
Slow and steady gathers no moss.
A rolling stone wins the race.

Better safe than hear the fat lady sing.
It isn't over till you're sorry.
Whatever you do, don't tilt at the wolf:
this is how it ends, the windmills are at the door.

The slice apple
has elephants' eyes for pips:

they stare up at the knife
that has brought them to life.

Posted by greenintegerblog at 11:56 AM