Considered to be the Mexican poet at the center of the modernist movement, López Velarde is one of the most beloved of Mexican authors.

Born in Jerez, Zacatecas, he was the first of nine children of a lawyer father and a mother who came from a landowning family. After his law career failed, his father founded a Catholic school in Jerez.

The following year the poet collaborated on the literary review Bohemio, published by local friends, under the pseudonym of Ricardo Wencer Olivares. The magazine associated itself with the Catholic figure Manuel Caballero, opposed literary modernism as represented by the polemical Revista Azul. Bohemio seemed to have little influence on the Mexican scene at large.

In 1908 Velarde began his law studies at the University of San Luis Potosí, but with the death of his father, the family fell into difficult finances. However, his uncles helped him to continue his studies. He also continued to collaborate on various publications in both Aguascalientes and later in Guadalajara. 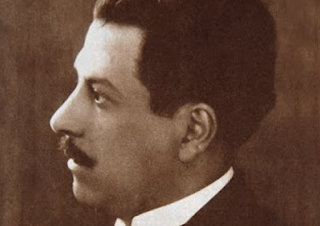 The young student became interested in modernist poetry, particularly in work by Amado Nervo and Andrés González Blanco, significantly changing his aesthetic sensibilities and transforming him into fervent modernist. In 1910 he began to write the book La sangre devota (Consecreated Blood) which would be published in 1916.

With the rise of the Mexican Revolution, López Velarde supported the political reforms of Francisco Madero, whom he personally met in 1910. After receiving his law degree in 1911, the poet became a judge in the small town of Venado. But he left the position the following year, traveling to Mexico City with the hopes that Madero might offer him a position in the government. When no such position was forthcoming, Velarde turned to his mentor, Eduardo J. Correa, who hired him to contribute to the Catholic journal of Mexico City, La Nación. Velarde wrote poems, reviews, and political commentary for the paper, attacking figures such as Emiliano Zapata.

After the revolt of February 9, 1913, which brought Victoriano Huerta to power, Velarde left his job in the desire the leave the turmoil of the capital city, returning to San Luis Potosí. There is began an unsuccessful courtship of a long-time friend María de Nevares, with whom he would remain in love for the rest of his life.

Returning to Mexico City in 1914, he experienced a period of some tranquility, as he again became involved with poetry, particularly the work of his friend, José Juan Tablada and the Argentine modernist Leopoldo Lugones.

In 1916 Velarde published his first book, which was well received by the literary community. He also began work on his second collection, Zozobra (Disquiet), and worked with González Martínez on the review Pegaso. Despite his intense Catholicism and provincialism, the young poet's literary reputation grew. Although highly criticized by González Martínez, Velarde's second book is still seen by many to be his best publication.

Throughout 1920 the poet continued to work in journalism, contributing to México Moderno and El Maestro, while working on El Son del Corazón and other works of prose. But suddenly at the age of thirty-two, Velarde contracted pneumonia (some rumored it was syphilis), dying on June 19, 1921.

Now, as never, you fill me with love and sorrow;

if any tear is left me, I quicken it

to wash our two obscurities.

Now, as never, I need your presiding peace;

yet already your throat is but a whiteness

and our whole being but a screed of dying strokes

Now, as never, your essence is venerable

and frail your body's vase, and you can give

me only the exquisite affliction of

a clock of agonies, ticking for us towards

the key minute when the feet we love

must tread the ice of the funereal boat.

From the bank I watch you embark; the silent

river sweeps you away, and you distil

within my soul the climate of those evenings

of wind and dust when only the church-bells chime.

My spirit is a cloth of souls, a cloth

of souls of an eternally needy church,

it is a cloth of souls bedabbled with wac,

trample and torn by the ignoble herd.

I am by a penurious parish nave,

a nave where endless obsequies are held,

because persistent rain prevents the coffin

from being bought out on the country roads.

The rain without me and within the hollow

clamour of a psalmist, louder and louder;

my conscience, by the water sprinkler aspersed,

is a cypress sorrowing in a convent garden.

Now my rain is flood, and I shall not see

the sunshine on my ark, because my hear

on the fortieth night must break for good;

my eyes preserve not even a faint gleam

of the solar fire that burned my corn;

my life is nothing but continuance

of exequies under baleful cataracts.

—Translated from the Spanish by Samuel Beckett

Wet earth of liquid evenings when the rain

under the redoubled pelting of the drops

of the roof terrace.

Wet earth of odoriferous evenings when

misanthropy toils up to the lascivious

solitudes of air and on them lights

with the last dove of Noah;

while the thunder crackles tirelessly

along the miry clouds.

We evenings of steaming earth when I

acknowledge I am made

of clay, for the summer tears, beneath

the auspice of the light that is half gone,

the soul turns to water on the nails

Evenings when the telephone invites

naiads known for their knowingness,

who leave their bath for live,

to strew their fatuous tresses on the bed

and to lisp, with perfidy and profit,

as the fine rain harries the window-panes....

its bed its bath;

evenings when a maiden

grows old in front of her extinguished hearth,

waiting for a swain to bring her a live coal;

evenings when on earth

evenings of supplication and Pascal candles;

evenings when the squall

incites me to inflame

each frigid maiden with the opportune coal;

evenings when, my soul

an acolyte of camphor,

—Translated from the Spanish by Samuel Beckett

If you're still researching Ramón López Velarde, you're kindly invited to the following free and online course by UNAM UK. A poetical celebration: Ramón López Velarde in English, from 4 Oct 2021 - 29 November 2021. All info here: