The seventh son of a coal miner, Gonzalo Rojas was born in the port village of Lebu. His poetic career, legend has it, began one day as a boy during a thunderstorm. As the young Rojas marveled at the torrential hail on the zinc roof of his house, one of his brothers said the word lightning, relámpago, a word which grew larger and larger the more he thought about it until it appeared absolutely awe-inspiring. "Since then," notes Rojas, "I have lived in the zumbido, the buzzing of words."

When his father died his widow moved to Concepción, surviving by renting rooms in the red light district. She placed each of her sons in a different private school, demanding that each be the first in his class. Rojas was dutiful and received a scholarship, but upon graduating he left the house with a third-class ticket for a boat headed north. At Valparaiso he gave up his few left-over pesos for a copy of Joyce's A Portrait of an Artist as a Young Man, finding in the book's adolescent artist a mirror of his soul. 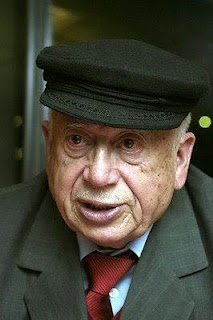 During the Valparaiso years, he worked as editor of the magazine Antarctica in Santiago and lectured at the University of Valparaiso. In 1936 he joined the surrealist Mandrágora group, founded by Braulio Arenas, Teófilo Cid, and Enrique Gómez Correa, but his work of these years also reflected more traditional Spanish poetic concerns, particularly metaphysical and social issues. His first book, La miseria del hombre appeared in 1948.

Rojas was the Chilean chargé d'affaires in Havana when Pinochet's dictatorship took over the country, and he was stripped of his passport and forced to go into exile as an undocumented person. The University of Rostock in East Germany hired him, and over the next several years he taught in universities in Germany, the US, Spain, and Mexico.

In 1979 Rojas received a Guggenheim Fellowship which allowed him to return to Chile. He moved to Chillán south of the capital to live, but we was never able to return to teaching.

Between 1980 and 1994 he lived in the United States, serving as a visiting professor at Columbia University and the University of Chicago before becoming a permanent professor at Brigham Young University.

He was awarded the Chilean National Prize of Literature and Queen Sofia Prize of Iberian American Poetry (presented by the King of Spain) in 1992. He also received the Octavio Paz prize and Cervantes Prize for 2003.

From consequences of a stroke Rojas suffered in February 2011, he died on April 25 of that year and was buried Chillán. Together with Nicanor Parra, Rojas was considered one of the greatest of modern Chilean poets.

I see a swift river shine like a knife, splitting

my town of Lebú in two fragrant parts, I listen

to it, smell it, touch it, run its length in a child's kiss,

as when the wind and rain swung me, I feel it

like another artery between my temple and the pillow.

it's him. My father's arriving soaked. The smell

of a wet horse. It's Juan Antonio

Rojas crossing a river on horseback.

No news. The torrential night collapses

give me that lamp, I want to greet him

before my brothers. Let me bring him a good cup of wine

so he can relax, and clasp me in a kiss,

and stick me with the thorns of beard.

against exploitation, dying of hunger,

here he comes in his Spanish poncho.

Ah, immortal miner, this is your house

of oak, that you built yourself. Come in:

I am your seventh son. I've come

to wait for you. It doesn't matter

that so many stars have gone through the sky of these years,

that we buried your wife in a terrible winter,

for you and she are multiplied. It

doesn't matter that the night has been as dark

for us as for the two of you.

—Come in, don't stand there

looking at me, without seeing me, under the rain.

Between the sheets, or even quicker, in a love-bite

they undressed us and we leapt out into the air

already ugly with age, wingless, with the wrinkles

What do I see on this table? tigers. Borges, scissors, butterflies

which did not move this hand, empty

Blindness I see. I see a spectacle

of madness, things that speak

only to be talking, to throw themselves

into the meagerness of that species

of kiss that approaches them. I see your face.

everything's written with a knife; debauchery

and discipline, tranquil and turbulent

days in the net; the saddest

of the one in three, you understand? long childhood

under a broken star; travelling, why so many

voyages upon voyages; the accident that night

in Madrid; honors, many honors,

blows of the helm; a terrible punishment

until you bleed, how you bleed; more changes

under the protection of Jupiter always; growth

toward distance in two children; he it spills out,

close that madman's hand, you intellectual."

The girl came out in him and he in he girl

through the spontaneous skin, and it was powerful

to see four in the silhouette of those two

kissing on the sand; a viscous vice

or vice-versa; a scene

that went from the beach to the clouds.

entered whom? were there sheets

with her stain and was he

Or tied to the deity

of pleasure are they laughing there,

whinnying just to be alive, in their fragrant

She kisses me greedily

Hoping to escape from death

And when I fall asleep she lodges in my spinal

Carrying me up to the sky, like a motherless condor

Boning up on death.

Dog On an Etruscan Vase

Look at the dog, bounded by the quadrupedal of his speed

and not in the discourse of his patheolithic barking

of a wolf leaping, come and take a look at him.

Orphic and translucent, four heartbeats in the air

as he enters sniffing around him, how persistent

as the funeral of the figure.

ether & ultrasound so the register's intact

and the animal's character shines in equilibrium

as on this Etruscan vase which still holds

its breath, the wingbeat

in the deft sketch, the dizzy

of some dead king, the two front paws

reaching him beyond the vase, running

after millennium among the luxurious

Posted by Douglas Messerli at 2:48 AM