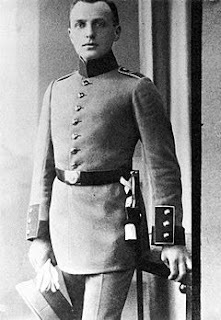 Alfred Lichtenstein was born in 1889 in Berlin, and studied law there until 1913, the year he joined a Bavarian regiment for a year’s military service. At the beginning of World War I he was in Belgium, and was killed in action the following year, September 1914, in Vermandovillers.

Lichtenstein had published only one small collection of poems, Die Dämmerung, published the year before his death. He had, however, written extensive other poems and stories that appeared in two volumes in 1919 in Munich, books reprinted in 1962.

The poet’s work fit nicely into the urban poets of early Expressionism. As a gentle humanist, skeptical and tender, Lichtenstein’s poetry was both highly serious and satirical, particularly in the ironic and self-depracating poems he wrote under the persona of Kuno Kohn. The realist, slightly surrealist poems he created link this German author with the experiments of Pound and early Eliot.

The fat man thought:
At night I like to walk in my galoshes,
Even through pious and immaculate streets,
I’m not quite sober when I wear galoshes…

I hold my cigarette in one gloved hand.
On tightrope rhythms then my soul goes tripping.
And all the hundredweights of my body dance.

The poet thought:
Enough. I’m sick of the whole lot!

The whores, the theatre and the city moon,
The streets, the laundered shirtfronts and the smells,
The nights, the coachmen and the curtained windows,
To hell with it!
Happen what may…it’s all the same to me:
This black shoe pinches me. I’ll take it off—

Let people turn their heads for all I care.
A pity, though, about my new silk sock.

Soon there’ll come—the signs are fair—
A death-storm from the distant north.
Stink of corpses everywhere,
Mass assassins marching forth.

The lump of sky in dark eclipse,
Storm-death lifts his clawpaws first.
All the scallywags collapse.
Mimics split and virgins burst.

With a crash a stable falls.
Insects vainly duck their heads.
Handsome homosexuals
Tumble rolling from their beds.

Walls in houses crack and bend.
Fishes rot in every burn.
All things reach a sticky end.
Buses, screeching overturn.

1913
—Translated from the German by Christopher Middleton

Only yesterday powdered and lustful I walked
In this various and resonant world.
Today how long ago the lot was drowned.

The sky is cold and blue.
Or the moon is yellow and flat.
A wood contains many single trees.

And all the streets lie snung there, clean and regular.
Only at times some brawny fellow hurries by.
A very smart young girl fights fiercely with Papa.
A baker, for a change, looks at the lovely sky.

The dead sun hangs on houses, broad as it is thick.
Four bulging women shrilly squeak outside a bar.
The driver of a cab falls down and breaks his neck.
And all is boringly bright, salubrious and clear.

A wise-eyed gentleman floats madly, full of night,
An ailing god…within this scene, which he forgot
Or failed to notice—Mutters something. Dies. And laughs.
Dreams of a cerebral stroke, paralysis, bone-rot.