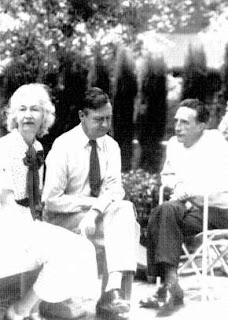 Born in Pittsburgh in 1878, Walter Conrad Arensberg is known today primarily for his important collections of art and the salons and gatherings he held at his homes for such noted poets and artists as Marcel Duchamp, Francis Picabia, Man Ray, Marsden Hartley, and Mina Loy, among others.
Beginning in 1916 and beyond Arensberg turned, in his own poetry, to experimental explorations of language and structure, with poems in magazines such as Rogue, his own Blind Man, Alfred Kreymborg’s Others (which Arensberg also helped to found), Man Ray’s TNT, and Picabia’s 391.
He also produced several studies of art and literary criticism, including a study of Bacon/Shakespeare, Dante, and others. His books of poetry, and particularly his uncollected experimental works, influenced later generations of poets.
Arensberg died in Los Angeles in 1954.

To read poems by the author, click below:
http://www.greeninteger.com/pdfs/Walter_Arensberg.pdf
Posted by greenintegerblog at 10:46 AM