Born in Recife, Brazil in 1920, Melo Neto is the acknowledged leader of the Brazilian poets of his generation. His early work was a reaction, in part, to the intense verbal experimentation and the ethnocentrism of the early Brazilian modernists. Influenced by Manuel Bandeira and Carlos Drummond de Andrade, as well as by Americans and French writers such as Marianne Moore and Paul Valéry, Melo Neto worked toward a highly personal, vaguely surrealist poetry. His first book, Pedro do Sono, was privately published in Recife in 1942. 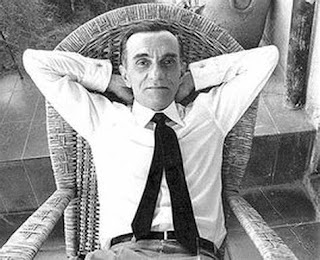 Following this book, however, he moved quickly away from that poetic position, working toward a new theory of poetic process. Over the next several years, Melo Neto began to see poetry as a highly and personal and self-conscious act, stressing the formal, geometric aspects of his writing. Having moved to Rio de Janeiro in 1942, three years later he joined the diplomatic service, and in 1945 was assigned to his first diplomatic post in Barcelona, Spain. In 1950 he was sent to the Brazilian mission in London, and over the next several years, served there until he was appointed the head of Brazil's Ministry of Agriculture in 1961. During these years some of Melo Neto's major works appeared, including Psicologia da composição (Psychology of composition), O cão sem plumas (The dog without feathers), O rio (The river), which won the Premio José Anchieta award for poetry, Paisagens com figuras (Landscapes in with figures), Morte e vida servina ("Death and Life of a Severino"), and Quaderna (Fourspot).

Morte e vida servina, in particular, marked a turn from the more intellectualized works of form to issues of social consciousness, exemplified in this verse drama drawn from Northeastern Brazilian folk traditions and stories. Melo Neto, himself saw this as a synthesis, expressed in "Education by Stone," whereby he worked to get the more elemental aspects of nature and culture.

In the mid-1960s, Melo Neto returned to diplomatic service, spending periods of time in Geneva, Barcelona, and Paraguay. He was appointed ambassador to Senegal in 1972, and began ambassador to Honduras, in 1982. During this period he continued to write and publish new books. He was elected to the Brazilian Academy of Letters in 1968. In 1988 he returned to Rio de Janeiro. He was awarded the Camões Prize in 1991, the Neustadt International Prize for Literature in 1992, and the State of São Paulo Literary Prize the same year.

I know there are millions of men

mixing themselves up this moment.

The director took hold of all consciousnesses

and keeps them in this bag of hornets.

Then, he multiplied them

not quite as bread was multiplied

by ten, by forty thousand.

His gesture was as if distributing flowers.

A monk, a pianist, a wagon driver was my lot.

I was a failed artist

who had exhausted all the backstages

I felt as tired as the horses

of those who are not heroes

I will be a monk

a wagon driver and a pianist

and I shall have to hang myself three times.

─Translated from the Portuguese by Richardo da Silveira Lobo Sternberg

the shadow eats the orange

the orange throws itself into the river,

it's not a river, it's the sea

overflowing from my eye.

born out of the clock

I see hands not words,

late at night I dream up the woman,

I have the woman and the fish.

I forget the home the sea

I kill myself uselessly

in the daily space.

─Translated from the Portuguese by W. S. Merwin

Within the Loss of Memory

Within the loss of memory

hiding in her arms one

of those cold birds

that the moon floats late at night

on the naked shoulders of the portrait.

And from the portrait two flowers grew

that at certain hours of the day

so that the bicycles of my desperation

And on the bicycles that were poems

swallowing their watches with regularity

while the hierophant armed as horseman

uselessly moved his one arm.

─Translated from the Portuguese by Djelal Kadir

(Landscape of the Capibaribe River)

§ The city is crossed by the river

is crossed by a dog,

a piece of fruit

§ The river called to mind

or a dog's sad belly,

or that other river

which is the dirty wet cloth

of a dog's two eyes.

It knew nothing of the blue rain,

of the rose-colored fountain,

of the water in a water glass,

of the water in pitchers,

of the fish in the water,

of the breeze on the water.

§ It knew the crabs

of mud and rust.

It must have known the octopus,

the feverish woman living in oysters.

never opens up to fish,

It never opens up in fish.

§ It opens up in flowers,

It opens up into a flora

as squalid and beggarly

as the blacks who must beg.

It opens up in hard-leafed

as a black man's hair.

of the pregnant dog,

§ And I never saw it seethe

(as bread when rising

the river bears its bloating poverty,

§ It yields in silence:

in black earthen boots or gloves

for the foot or hand

with dogs, the river

Its waters would turn

flowing with the thick

of a crazy man's stagnation.

Something of the stagnation

of the dirty and smothered life

§ Something of the stagnation

by mold and mistletoe.

Something of the stagnation

from the Pernambuco dining rooms

with their backs to the river,

that the city's "cultured families"

brood over the fat eggs

In the complete peace of their kitchens

§ Could the river's water

be the fruit of some tree?

Why did it seem

Why the flies always

above it, as it about to land?

§ Did any part of the river

ever cascade in joy?

Was it ever, anywhere,

a song or fountain?

were its eyes painted blue

─Translated from the Portuguese by Richard Zenith

Written with the Body

Such is her composition

that she is apprehended

only in the sum, never in parts.

There is no single term

where attention is arrested;

or that, however significant,

Nor can she be parsed

to derive a paraphrase

from what in her is sense.

And just as, only complete

is she capable of revelation,

only another body, complete,

has the faculty to apprehend her.

Only a body in its completeness

can engage in the corps a corps

needed by whomever, not reducing,

wants to capture all the themes

that she, composure intact,

reveals with such intensity.

Seen from afar, lik a Mondrian

reproduced in a magazine,

she betrays only the indifferent

Up close, however, the original,

seen before as cold correctness,

free of the interfering camera

of distance and its lens;

up close, however, the close eye

up close, when sight is tactile;

to the quick and naked eye

one can discern in her

revealed by the Mondrian

when seen in the canvas.

Yet in one respect

she differs from a Mondrain:

what in her is vibrant

and goes unnoticed from afar

can forego the flame of colors

without which a Mondrian is static,

can vibrate with the white texture

of wholesome skin, or canvas.

When he is dressed with only

he feels more than undressed:

He is, in fact, undressed

save for the clothese which she is

but these he does not wear:

internal ones slip off.

When the body dresses itself

it feels itself more defined

than it does when wearing clothes.

It feels itself more than undressed

for its secret skin

soon unravels and it assumes

her skin, which she lets him borrow.

But the borrowed skin also

does not last long as clothes

for very easily she too

unravels and is divested

until she's left with nothing,

neither skin, nor silk:

all is mingled, common

She is, when she is not here,

held by an outside memory.

Outside: as if she were held

by an external type of memory.

A memory for the body,

cause it to touch the body.

A memory external to the body

not the one growing inside;

and that, since intended for the body,

So it is within this memory

that she, unexpectedly, is embodied

in the presence, thingness, volume

of a body, solidly there

and that is now dense volume

in the arms and held by them,

and that is now hollow volume

that surrounds and shelters the body

as something that was both dense

and hollow at the same time

that the body had, where it was

as if the having and the being were one.

─Translated from the Portuguese by Ricardo da Silveira Lobo Sternberg

An education by stone: through lessons,

to learn from the stone: to go to it often,

to catch its level, impersonal voice

(by its choice of words it begins its classes).

The lesson in morals, the stone's cold resistance

to flow, to flowing, to being hammered:

the lesson in poetics, its concrete flesh:

in economics, how to grow dense compactly;

lessons from the stone, (from without to within,

dumb primer), for the routine speller of spells.

Another education by stone: in the backlands

(from within to without and pre-didactic place).

In the backlands stone does not know how to lecture,

and, even if it did would teach nothing:

you don't learn the stone, there: there, the stone,

─Translated from the Portuguese by James Wright

"Pirandello II," "Daily Space," "Within the Loss of Memory," "Landscape of the Capibaribe River," and "Education by Stone"

For a performance of Melo Neto's "Morte e vida severina" by the author in Portuguese, click:

Posted by Douglas Messerli at 2:43 AM

Whenever we praise someone, we give him a number, like if I appreciate your post from one to 10, I would like to give you the full number of 10 because you wrote your post very well. The word is very beautiful. I hope you will keep writing such excellent posts in your life and we will definitely comment by reading these posts.
gurugram many girls
Escort service in gurugram
call girls in bhiwadi
call girls in gurugram
Escort service in haryana
love making call girls in aerocity
escort girls in sushant lok
DLF Cyber City Escorts
College Girls in Sector 45
Escort Service in Sector 50