Jean-Pierre Rosnay was born in a Protestant family in Lyon, France on April 8, 1926. His father was a factory worker, and his mother Violet died when was only five, after which Rosnay went to live with his aunt until his father remarried. A fragile child, Rosnay learned to fight the neighborhood bullies, something that would remain important throughout his life.

Although his home held few cultural possibilities, his uncle Justin introduced him to poetry, and made him read the classics aloud, since he himself could not read. At the early age of 12, Rosnay left his family, taking refuge on a farm in Saint-Paul-Trois-Chateaux.

At 15½ Rosnay joined the Resistance Movement. When asked for a pseudonym, he suggested Tom Mix, but fellow fighters chose the name "Baby" for his nom de guerre. Part of the first French group of the Secret Army commanded by General Jean Vallette, Baby first fought in Haute-Loire and Lozère. He also wrote poems and song to boost morale, and was surprised to hear some of their performed over radio. 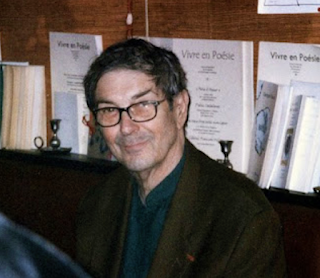 In 1944 Rosnay was charged with murdering Klaus Barbie, the Gestapo army captain, known as the Butcher of Lyon. Betrayed by friends, he was tortured for four months by the Gestapo before he escaped and joined rejoined another Resistance group. He was seriously injured in one of the attacks and saw numerous friends fall.

After the war Rosnay and friends founded a group dedicated to war poetry, JAR, the Jarvistes, "Young Authors Meeting." Among the members were George Moustaki, Guy Bedos, and George Brassens. Eventually, Rosnay turned to reading poetry on radio and television, and establishing the famed Poets' Club, which he emceed, beginning each broadcast with "Good evening friends, good evening!" Eclectic in poetry selection and without poetic hierarchies, its programs offered everything from humorous poems, fables for children, music and spoken word combinations, established poets and unknown figures.

The all said My France

And each one plucked another feather

When the enemy attacked

He found the picket-lines intact

I was in love with nothing to say

not yet sixteen to love with you

What could I say I was too young

I took up the sentry's gun

And now it's over

excuse me for reminding you

At times I feel very much alone

An inquisitive monarch, wanting to know what his court was thinking, disguised himself as a beggar one day and knocked at the door of his own castle.

This occurred when history was written from mouth to ear. Men fought to have something to tell their children on winter nights, women spun wool, and on tavern mantels huge pipes spoke to whoever looked at them of the style of innkeeper.

I lift up my eyes

and I see sky on the rooftops

Then I notice I haven't lifted my eyes

and I have seen the sky

I would swear it on my life

I write out loud

what I think under my breath

I write that an Irishman is smiling in the fog

I remember quite exactly

and the flaxen morning

I talk with soldiers

who died in battles

I swim in rivers I have

Then I notice I haven't lifted my eyes

and I have seen the sky

I would swear it on my life

Posted by Douglas Messerli at 3:04 AM