Born in town on the Bay of Antongil, in Madagascar of June 23, 1913, Rabemananjara was traditionally educated by his grandfather—a member of the Betsimisaraka tribe—in the cults of his ancestors and the history, tales and legends of his family and people. After leaving school, Rabemananjara became an organizer of the first union of Malagsy civil servants, and co-founded La Revue des Jeunes de Madagascar, a journal which expressed nationalist sentiments at odds with the French rulers, who forced the magazine, after 10 issues, to cease publication.

In 1939 he traveled to Paris with a French cabinet minister, and studied for a degree in literature at the Sorbonne. There he met Erica de Bary, the heroine of his Rites millénaires, and whom he ultimately married. During the war years in France he met members of the negritude group, including Léopold Sédar Senghor and Alioune Diop, who contributed to the African journal Présence Africaine.

Returning to Madagascar after the war, he led the formation of a new political party, and in 1946 won an election making him one of the three Malagasy deputies to Paris. In 1947, however, Malagasy revolutionaries attacked a French military installation, setting several buildings afire. The authorities retaliated by killing or wounding eighty thousand Madagascans. And, although there is no evidence that his Mouvement democratique de Renovation Malgache party was involved, Rabemananjara was threatened with death, suspected of having organized the uprising. He was tried, found guilty, and sentenced to life imprisonment at hard labor. He spent the next 10 years in French colonial prisons, later being exiled to France. His Antsa (Song), published in France in 1956, made him a national hero, and associated him even more closely with Senghor and Cesaire.

He returned to Madagascar upon its independence in 1960 as Minister of Economic Affairs, and then Foreign Minister of the new Malagasy Republic. 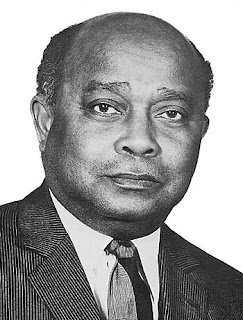 cool clitoris of the corolla

knob hard and velvet from caresses

lavished before the ecstasy

where the flag of pride

snaps in the night wind.

—Translated from the French by Ellen Conroy Kennedy


Posted by Douglas Messerli at 1:47 AM