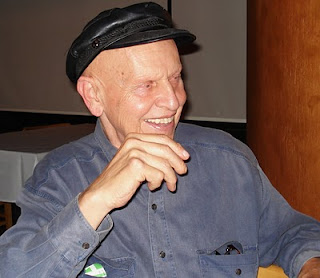 Born in New York City in 1932, David Antin grew up in Brooklyn in a family of European emigres. His father died when he was two, forcing his working mother to leave him for years at a time with various uncles and aunts who, as he remembers it, argued and told endless stories in various European languages. These early family experiences are the subject of many of Antin’s later “talk poems,” and were, in part, what helped him later to be such a gifted storyteller himself.

As a young man he attended Brooklyn Technical High School with intentions of becoming a scientist or an inventor. It was there he read works such as Gertrude Stein’s Three Lives and Joyce’s novels, all of which highly involved him, and began to interest him a literary career. At age 16 he left home, ultimately attending the City College of New York. There he met fellow student Jerome Rothenberg, a poet who still remains a close friend of his in Southern California. At City College he edited the school’s literary magazine and wrote mostly fiction.

His ability with languages helped him to get jobs after college as a scientific translator. When Rothenberg returned from the army, they helped found—along with Ursule Molinaro, Venable Herndon, and Robert Kelly—the Chelsea Review. During that same time, Antin had begun to write poetry, and responsive to Rothenberg’s ideas of “deep image,” began working on a exploratory, expressive poetry that had an “image core.” When the term was taken up by others such as Robert Bly, Antin and Rothenberg felt that their ideas were “eviscerated” of any intellectual significance, and they stopped using it. During this time of the early 1960s, his poetry began to be published in various journals, including El Corno Emplumado, Folio, Kayak, and Trobar—one even in The New Yorker.

Meanwhile, in December 1961, he married Eleanor, who later became an internationally recognized artist. Antin became disengaged with the kind of writing he was doing and turned from imagistic based works—works which critic Marjorie Perloff has argued owe something to Surrealism and Breton—to a “process poetry,” work influenced by the art world of the 1960s—much of which Antin was writing about in art journals—which was more “confrontational” than the lyrically-based work he had been doing. In 1968 he published Code of Flag Behavior and in 1971 Meditations built around an alphabetical listing of words that high school children had trouble spelling.

The same year, Antin was asked by Dore Ashton to take part in a series of talks she was organizing at Cooper Union, and, along with other talks he was asked to do (at Pomona College in Southern California and a reading at the San Francisco Poetry Center) Antin began working with the improvisatory compositions that have defined much of his poetic activity from 1972 onward.

These pieces generally begin with a suggested topic, which, after research into various related subjects, are created before the audience as Antin interweaves various ideas and stories together through poetic devices such as repetition, rhythm, metaphor, and other poetic conceits. The pieces are taped and later typed up and revised by the poet into works that look more like prose pieces, albeit without margins and standard capitalization. Among his important books of “talk poems” are Talking (1972), Talking at the Boundaries (1976), Tuning (1984), What It Means to Be Avant Garde (1993), and i never knew what time it was (2005). In 2002 Granary Books published A Conversation with David Antin, an interchange between Antin and Charles Bernstein.

In 1968—on the day that Robert Kennedy was shot and killed in Los Angeles--the Antins moved to Southern California to become professors of art at the University of California at San Diego. Thirty years later they continue to live near La Jolla.

Most recently, Antin has published a critical summary of his art and literarty criticism, Radical Coherency.

Click below for a video in which Antin dicusses narrative and poetry:
http://www.youtube.com/watch?v=TFqOlTQu_n4

For a talk poem, "Rethinking Freud" by David Antin, click below:
http://www.youtube.com/watch?v=ViWPGQaPrwI

For a large selection of talk poems, interviews, and even David's "Sky Poem I" click below:
http://writing.upenn.edu/pennsound/x/Antin.php
Posted by greenintegerblog at 8:18 AM